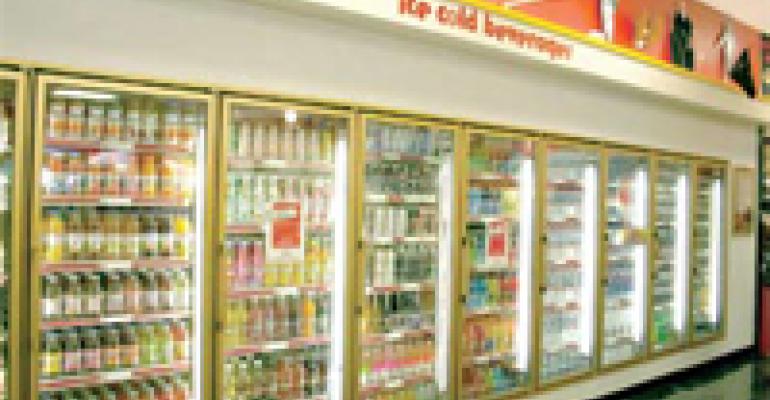 High-volume onsite retail operations have to work to keep packaged beverages on the shelf.

During a typical midday rush at Comcast Corp.'s headquarters in Philadelphia, customers put a heavy strain on the bottled beverage displays in the company's Ralph's Café onsite dining venue. To keep up with the demand, Flik International, which manages Ralph's for Comcast, keeps one manager employed full-time just running stock from the storage area to the displays.

“It's all he does,” says Café Manager Kristielyn Martin. “It may have to be replenished three or four times on busy days.” Given that each of the two cases holds 600 containers, that is a lot of work.

Keeping the beverage displays filled can be a challenging chore for high-volume operators. The task is complicated by the reality in many venues that onsite storage space is lacking, which means the stock has to be transported over considerable distances, sometimes from another floor or even another building.

And, as anyone who has worked beverage stocking will tell you, bottles and cans filled with liquid are not exactly feather-light or ergonomically friendly.

At the high-volume retail stores at San Diego State University, daily deliveries are necessary during the school week to compensate for limited storage space, says Associate Director Rick Barber. The school sells up to 3,500 bottles of beverage per day Mondays through Thursdays.

“Not all of it will fit into our cold walk-ins, so we have to ensure we always have enough cold product available to get us through as much of the day as possible,” Barber says.

He says they department tries to restock cold walk-ins during slow times of the day. During the peak lunch and class break periods, “we always try to have one person dedicated to filling the product as it sells.”

That sounds familiar to Walter Thurnhofer, RD, director of food and nutrition services at the University of Washington Medical Center in Seattle. Keeping cooler displays restocked during peak periods “is a real challenge,” he says.

UWMC's retail outlets boast eight refrigerated beverage displays that hold 1,200 to 1,500 individual bottles. That sounds like plenty but with some 3,000 customers passing through on an average day, they can disappear pretty quickly.

“We stock them in the morning and try to make sure they are full when the typical midday rush starts,” Thurnhofer explains. That rush period lasts about two and a half hours, and the inventory doesn't always make it.

So, like Flik and SDSU, UWMC has one staffer charged with primary responsibility for keeping cases filled. That is not easy because, unfortunately, the reserve stock is kept in a storage area about a hundred feet away from the displays.

Worse, to move it, “you have to go through the kitchen,” Thurnhofer laments. That can be the kitchen during the busy lunch rush if the bottles have to be replenished on short notice, by the way.

UWMC does get a couple of breaks. Two of its eight coolers can be restocked from behind, meaning extras can be stored there when needed instead of being hauled through crowds of milling customers. Thurnhofer says he keeps the fastest movers in these cases.

In addition, another couple of coolers are proprietary branded displays that are restocked by the beverage distributors for those companies. They come in once or twice a day to do that and leave extra stock in case they have to be replenished in the meantime.

“I wish there was an easier way to get customers the beverages they want,” Thurhofer says. “But as long as they want the convenience and portability of bottles and cans, there's little we can do but try to meet their needs.”