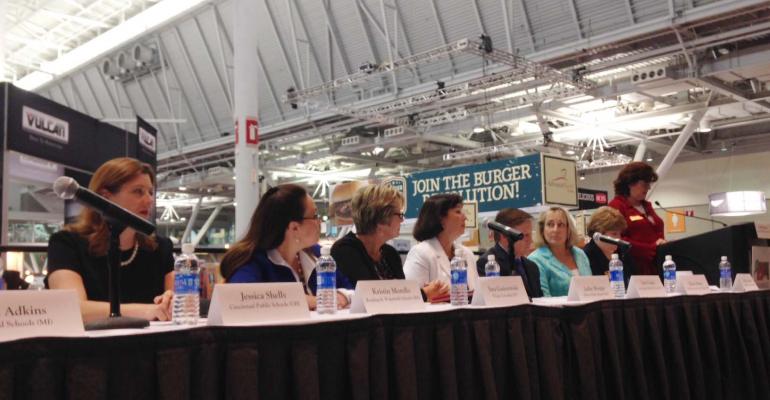 <p>Leah Schmidt talks during the press conference at the SNA&#39;s annual conference.</p>

Just before the exhibition doors opened to thousands of school food workers, the School Nutrition Association held a brief press conference with CEO Patricia Montague, outgoing president Leah Schmidt and a group of school foodservice directors and other leaders on the floor of the Boston Convention Center.

The first question, and one of only two, from the media in attendance, came from a reporter from Politico, an outlet that in any other year would be completely out of place at a school foodservice show. But this isn’t any other year. SNA is embroiled in a very public and sometimes contentious debate with the USDA and First Lady Michelle Obama over increasing regulations mandated by the Healthy, Hunger-Free Kids Act. Its legislative efforts to maintain the 50% whole grain rich and Target 1 sodium levels, drop the requirement to serve a fruit or vegetable with every meal and allow items sold on the meal line to also be sold a la carte have kept the debate going, but also led to increased and sometimes negative attention from mainstream media. (More on those four positions from SNA.)

The task now falls to Julia Bauscher, the 67th president of SNA and the director of school and community nutrition services for Jefferson County Public Schools in Louisville. Although Bauscher admits she’s good friends with her counterpart on the other side of the dispute, Dr. Janey Thornton—the deputy under secretary of the USDA and a former SNA president—she says the efforts Montague and Schmidt began this year will continue.

“We’re not changing course now,” Bauscher said after the press conference. “I represent the same members.”

Here are 13 thoughts on ANC14, SNA’s Annual National Conference, and the ongoing debate based on numerous interviews and casual conversations I’ve had there and in recent weeks…

• The awkwardness of ANC14 was perfectly summed up in one short stretch during the second general session of the event on Tuesday. After the two candidates for vice president were introduced, Wendy Weyer (Seattle Public Schools) and Jonathan Dickl (Knox County, TN), Thornton of the USDA took the stage and briefly addressed the thousands in attendance. She spoke of the positive changes, asking the audience for continued feedback and also asked members to concentrate on the positive. She said she hoped everyone could continue to work together and share best practices. Immediately following was an update from Weyer and SNA staffer Cathy Schuchart, on the group’s advocacy efforts to undo parts of what Thornton had just spoken so positively about. From one side to the other, with barely a segue.

• One director afterward told me he was upset with Thornton’s speech. “Haven’t SNA and its members been sharing with her our struggle (the past year)?” His impression, and that of others, he said, was she wanted to only hear how the new regs were working, but not about any of the challenges. He thought she painted a rosy picture of how implementation was going and didn’t want to hear the reality.

• Fair or not, I do believe this director and almost every other one I’ve corresponded with really want to make this work. If you read the 10 letters I’ve received in response to my June editorial, you’ll see all point out specific and significant problems they’re facing, but almost everyone is positive and sincere sounding in wanting to make the new regulations work and improving childhood nutrition.

was its press conference at the event on Monday morning, just before the trade show floor opened. Behind the long table seating Montague, Schmidt and the other leaders were 180,000 square feet of space filled with the latest in school food, equipment and other supplies, perhaps not the best backdrop for an association fighting a reputation of being backed by big industry. I did ask every vendor I talked to—including Schwan’s, often cited as one of the companies pushing SNA the hardest—where they stood on the new regs and if they had pressed SNA. The answer from every single one was some form of, “No, our reformulated products currently meet the latest requirements and we’re already working on more changes to meet the upcoming requirements.”

• I do feel bad for the leadership of SNA. I think they are legitimately doing what they feel is best for their membership, who I believe really is struggling with these changes. I’m not sure if the legislative route was the best course of action—it may have ratcheted up the politics—but it’s the route they’ve gone. The lawyers helping SNA with its lobbying efforts told me they were beyond pleased with how well it’s worked, and it certainly has kept the debate front and center. I’d say the downside, though, is it has painted the organization in a less than flattering light and sometimes made the people on the frontlines (FSDs) look like they are against healthy eating. Which is definitely far from the truth, but that’s a story I’ve already written.

• And I also feel bad for the USDA, which bravely stood its ground from Thornton on the main stage to several USDA-led educational sessions that invariably ended with a line of questions, not always the friendliest, from troubled FSDs. The goals of HHFKA and the First Lady’s Let’s Move! Campaign are important, worthwhile and necessary. The execution has been the difficulty.

• But mostly, I feel bad for the FSDs, who are stuck in the middle of this. Most are doing their best with limited resources, trying to feed kids great tasting and nutritious food. I think what many in the mainstream media and the bloggers and critics overlook is the fact school foodservice is a business. Even free and reduced meals are a challenge. Schools are reimbursed just under $3 for meals served for free as part of the National School Lunch Program. That’s no easy free lunch when you’re also figuring in labor and equipment costs, especially if you’re expecting to get fresh fruits and vegetables in there, cleaned and attractively chopped and presented. The actual food costs are closer to a dollar. I guarantee directors would much prefer to serve all fresh, locally procured products cooked from scratch every single day. The reality is they don’t have the staff, equipment or money to do that. Hence they buy many of those prepackaged products displayed on the trade show floor in Boston. And on the non-free and reduced side, the business aspect is even tougher. School lunches are competing with packed lunches and the numerous options kids have. If lunches don’t taste good or aren’t filling, kids can choose to spend the equivalent money elsewhere and will likely buy far less healthy food, or in more affluent communities, they’ll spend even more on less healthy food.

• The easy answer, obviously, is schools need more money for the nutrition programs. But for it to be budgeted, it must come from somewhere else, which if you recall, led to another debate during the last Child Nutrition Reauthorization Bill when the funds were being pulled from SNAP, the food stamp program. The good news is during the ag appropriations hearing Wednesday one of the Democratic senators said she supported a 35% reimbursement rate increase to support the new nutrition goals and asked if the panel agreed. The answer was yes.

• What I still am trying to wrap my head around is how come some schools and directors seem unfazed by the regs, while others struggle. There are examples of success in big districts, rural areas and some with a high percentage of free and reduced meals and others without. I’d guess the answer is there are varying levels of staff expertise, equipment and administrative support from one district to the next.

• I’d guess 75% of directors agree with the efforts to delay or ease the regulations in some form and, at most, 25% are happy with things as they are. That’s based on discussions I’ve had at the Culinary Institute of America’s Healthy Kids Conference, ANC14, numerous email exchanges and phone calls. I bet I’ve connected with 50 to 75 different directors, and the vast majority seem to be forward thinking and many got a head start on this before the stricter regs came, but they almost all have said the challenges are real.

• I’m not sure if there is hope for compromise, because HHFKA has been passed and the USDA does not have to offer more flexibility if they firmly believe none is needed. On Thursday, SNA CEO Patricia Montague sent a letter to the first lady taking her to task for comments “disparaging school nutrition professionals,” according to the letter. In it, she again called for a face to face meeting. Both sides believe they have the vast majority behind them, so finding middle ground seems unlikely.

• But I do believe there is room for some compromise or flexibility that both sides could live with. Why not make the whole-grain rich requirement 75%, exactly in between the 50% from a year ago and this year’s 100%? Or 85%? It would allow enough wiggle room for the regular, old-fashioned biscuits, tortillas and grits on occasion. Delaying the Target 2 sodium is a tougher one, since it’s already two years away, but the letter I received from an anonymous FSD with examples of sodium counts on different meals really opened my eyes to this challenge. Maybe an extra year would allow for more research and time for manufacturers and schools to prepare?

• I’m less sure there’s middle ground on the fruit and vegetable requirement, because that’s a tough sell publicly, as the SNA has found out. Frankly, as a parent, I want my daughter being served fruits and vegetables in kindergarten, but I do understand it’s a tougher sell to high schoolers and there probably is more waste. I spoke to someone at ANC14 who said the argument shouldn’t be about serving fruits or not, but instead on how can we make it easier to serve fresh and different fruits that will get eaten. Money, again, is a big part of the answer. And I’m not sure I think the new Smart Snacks standards need to be changed, but perhaps there could be a year delay to give everyone more time to adjust or to consider easing the nutritional limitations a touch. These are a lot of changes, all at once, and this is an area that requires threading a needle on nutritional requirements, and maybe a slight reprieve until everything else gets figured out could help. I hope there can be some resolution that ends the back and forth, so the focus can be on what matters most. The kids.

Wow, I didn’t mean to write a novel. Now that I’ve probably alienated all sides of the dispute, thanks for reading if you made it this far. As always, feel free to email me your thoughts at [email protected].