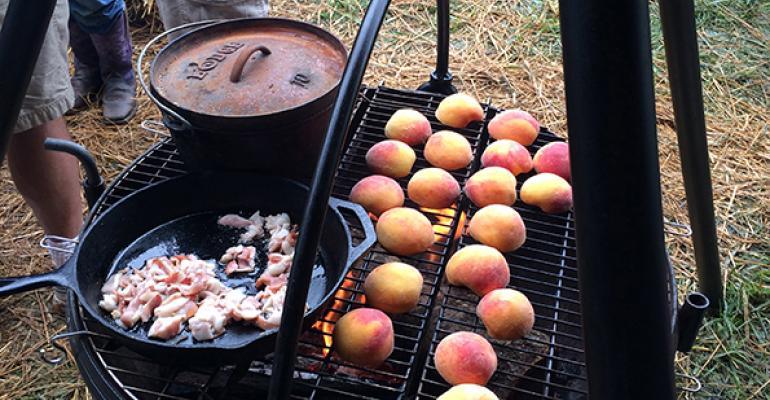 3 Days of Peace, Music and Lamb

Lambstock is Woodstock for chefs, I’d been told. I’m happy to report that it’s true.

When I arrived in Patrick Springs, Virginia, tucked within the rural and rolling piedmont of the Blue Ridge Mountains, I found a tent city being raised on a stretch of pasture in the misting rain. Lambs roaming the hillsides were watching the chefs, foodies, ranchers, farmers, musicians, bloggers, journalists and crafters of food and drink, all out to taste the marrow of life (and lambs) during these three days in August.

Smoke rose up into the mist from a large pavilion below the tent city, which would serve as the outdoor kitchen for the chefs of Lambstock…some very friendly and super cool folks! Their easy-going Southern charm was no small comfort for this girl whose idea of roughing it is a room at the Hampton Inn, and who was now contemplating calling a small tent home for a few days, showering in a wooden shed and using a porta-potty.

But it was so worth it, and then some! The conversations, the fun and the food made my worries seem so far away. And I got a few compliments on my new lime green rubber dairy boots.

Lambstock… how can I describe it? Well…

Lambstock is hot smoking Cowboy Cauldrons, burning logs from felled local oak split by an axe-wielding cowboy at the same time lamb and pork and peaches and summer squash cook above the coals…people hanging out, laughing, listening to live music, just having fun. Lambstock is sharing Southern foodways and traditions and wild new culinary innovations, too.

It is insanely good cornbread appearing at just the right time. Lambstock is singing and guitars echoing in the valleys nearly to dawn and three-o’clock in the morning philosophical discussions waking me up from my beauty sleep and hourly check for spiders and ticks. And then, the next morning, Lambstock is emerging from a damp tent to find lamb barbacoa in warm tortillas and lamb-meatballs in a Bloody Mary for breakfast.

I think preserving this culture is why a rancher, Craig Rogers, aka the Shepherd, opens his gates at Border Springs Farm to allow a crew of mostly strangers to take over his property and enjoy his hospitality. It’s how you keep the culture alive. If you take the Southern hospitality out of Southern food, you end up with something not so authentic…like instant grits.

When it was time to dig in at each mealtime (which was pretty much anytime), I learned something new with every plate. I learned that okra can be so amazing when cooked just barely, so crisp and bright green it seemed alive, and then kissed with a silky cheese sauce.

Everywhere you turn at Lambstock, someone is doing something delicious. Cast iron skillets sizzle on the cauldrons with lamb; potatoes; bacon; and rich, wonderful-smelling stuff that would become hash and bubbling stews and stocks. There was biscuit dough rising, fine Virginia wines poured, and the best oysters in the country (Rappahannock) being shucked. Someone told me, “The ocean called, they’re running out of oysters!” It was comforting to know that even way out here, it still all comes back to Seinfeld.

If you talk about food but not the culture behind it, you’re missing the point. Like most authentic food, Southern cuisine has real roots, and Lambstock celebrates not only the food and the personalities cooking it, but also the culture and the history of people who know how to pickle, how to can, how to barbecue, how to save everything, use every part and how to throw down and celebrate, too. A super cool chef named Travis Milton of Comfort in Richmond, VA, prepared red gravy and corn bread, and told me some stories. A bottle of his favorite Kentucky bourbon was part of his mise en place.

(Continued from page 2)
He offered the small group gathered around him shots of the whiskey, and toasts were made every few minutes. His pride in his culinary and family roots went as deep as the ink on his arm, a tattooed tribute to his kin and upbringing.

Alongside the whiskey bottle were a couple jars of bright, fleshy peaches, pickled with a tart, sweet, basically otherworldly recipe from Travis’s great grandmother. He put them out there to be shared and discovered by a hungry and happy crowd.

As I hovered over his workspace, snapping pics with my iPhone (probably in the way), I asked for the secret to cornbread like I was asking for the secret to the universe. Just like nothing, he told me: buttermilk. More buttermilk than you think. And I learned the right way to cook grits, too, something that has eluded this girl from Ohio for many years.

Jay Pierce from Lucky 32, a Southern restaurant concept with places in Cary and High Point, North Carolina was working his own magic with grits at another station in the smoky pavilion. I wandered over to interview him (his answers were very sassy!) and set up the shoot of my next “Chef Demo” feature with the help of the very talented Roanoke-based photographer and all-around foodie John Park, one of the main organizers of the event. (And let me give a big shout out to John, for bringing a lot of Lambstockers together through Twitter.)

Everything I saw, I immediately dubbed “an Instagram waiting to happen” – from the lamb meatballs garnishing the Bloody Marys made with North Carolina vodka and sharing the go-cup with pickled green beans, pea shoots, garlic olives.

Old traditions were honored, sure, but new traditions were on the menu, too. The New South has global influence, and on the menu was Hot Kimchi stew, started a few weeks ago by John Park (I’d seen that on Instagram in real time).

I created a Twitter hashtag a long time ago to represent my homesickness for the home I never had: #wannabeSouthernBelle. I have a source who brings me Duke’s mayo from the South (he knows a guy who knows a guy). I’m always looking for pimento cheese and Cheerwine soda in the grocery store aisles. And when I entered the coffee tent on Monday morning (it was pouring rain by then and I was wearing a bright red poncho), I got another truly Southern experience: Goody’s.

“Ooh, I always wanted to try these,” I said to the nice people serving coffee to the groggy Lambstockers, as I picked up the package of what looks like sticks of paper gum wrapper with a legal white powder inside. A few people sipping their coffee in the tent were happy to instruct me on the fine points of powered aspirin: “Open up the packet like this, and pour it down your throat. It’s going to taste terrible, so chase it with coffee.” A few seconds later, I was fighting back tears and gagging.

“Bless your heart!” one real Southern Belle told me, the words like honey dripping from a spoon, as I gasped for air and retched. And, just with that Southern sentence being spoken, all I could think was “I’m happy as a clam!” Or maybe a lamb.

After I recovered from the Goody’s, I was hot on the trail of a hotel…a bathroom I could get to without putting on boots and then getting rained on…crisp, dry sheets beckoned. But as I drove away on the country roads, I made a wish that this wannabe Southern belle will come back again next year. Stay tuned for a slideshow with more photos!