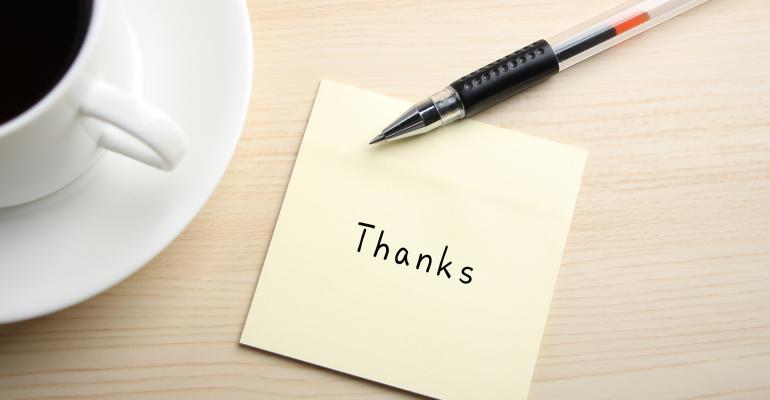 Every week I write an online column called 5 Things. It highlights five news items you might have missed that week and why you should care about them. For this month’s letter I decided to play a riff off that online column, with a Thanksgiving Day theme. It’s been one year since I joined the staff at Food Management, and I’ve got a lot to be thankful for. Here are my top five:

1. I had the pleasure of knowing Jon Lewis. Jon unexpectedly died in October at the age of 61. Jon boasted a 30-year foodservice career, the last nine as director of dining services at Ball State University. I met Jon many years ago at a conference, and like so many others was immediately drawn to his caring personality and lust for life. One of my lasting memories of Jon will be his cheeks, always flushed with excitement. When I told an old colleague about Jon’s passing, she said, “I love that man.” I don’t think there’s any better way to describe him. Jon, you’ll be missed.

2. I was able to tour the Food Shelf at Hennepin County Medical Center. Director Bill Marks and his team have opened a Food Shelf that provides food to those in need—more than 100,000 meals are served each year through funds raised by donations and grants. The Food Shelf is an amazing program built on collaboration between many different hospital departments all working to eradicate hunger and teach healthy dining. Often hunger doesn’t get talked about in this country—but great programs like this one are doing more to fight back.

3. I saw the small guys win. It’s no secret that big food corporations have been getting negative press lately. But I was thrilled to see when global food management giant Sodexo, the world’s 19th largest employer, and Back to the Roots, a Bay Area-based startup that boasts a roster of just 14 employees, worked together to feed children. Through the partnership students across the country will learn how to grow their own food and the nutritional benefits of eating produce.

4. I got to see the meaning of my work. This summer I visited an old friend, Howard Rosenberg, the director at Amsterdam Nursing Home in New York. Howard and I had met years ago when he was at a facility on Coney Island. When Howard showed me into his office he pointed to a framed story on the wall that I had written about my first visit with him. The photo was one of the very few things Howard was able to save when Hurricane Sandy decimated the facility. It was incredibly touching to see one of my stories had made an impact.

5. I ate a lot of really good food. I don’t mean to brag, but sometimes my job is really cool. From sushi prepared at the famed Sony Club to some of the best “health” food you can get prepared by students at the CIA, I’m never hungry. As a side note, my trainer also thanks you for this one!

From all of the staff at Food Management, we wish you and your family a very joyful holiday season. We’d love to hear what you’ve been thankful for this year or your thoughts on Jon Lewis’ impact to the industry or your career. Happy holidays!