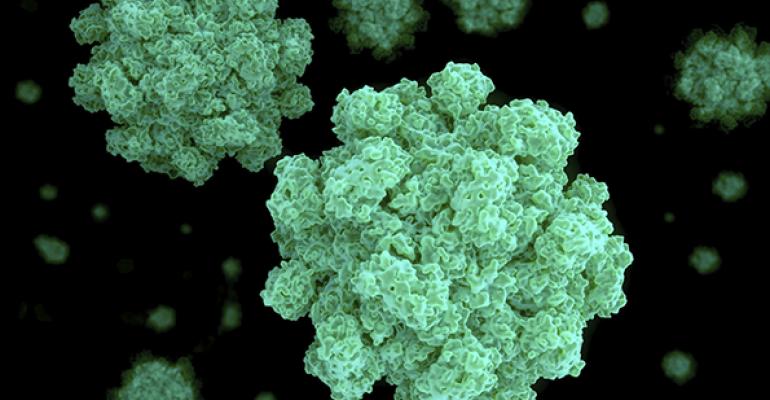 Norovirus is absolutely horrifying...Here's what you can do about it

At the recent NACUFS National Conference in Indianpolis, I attended an afternoon session called Norovirus: Never-ending Battle in Colleges and Universities. I was surprised the session wasn't better attended. After all, Norovirus can literally shut down an operation. Is everyone really completely prepared for what could happen?

As small as the crowd was, we were riveted by some of the disgusting facts and figures shared by Daniel Archer, MPH, REHS, of Stanford University's Residential & Dining Enterprises, Elaine Black of Ecolab, Al Baroudi of the Cheesecake Factory and Jorge Hernandez of US Foods.

Here are a few of those facts and figures that elicited gasps from the audience and at least one exclamation of "Oh, hell no!" (OK, that was me).

-The amount of Norovirus that could fit on the head of pin is enough to make 1,000 sick. That's one-zero-zero-zero!

-Norovirus is the most common cause of epidemic gastroenteritis in the U.S.

-Each year, 21 million cases are estimated. The estimate is rough because a lot of people just ride it out on their own instead of going to a healthcare provider to receive care.

-What are they riding out, you ask? Complete and total agony, basically. Nausea and stomach cramps followed by vomiting and diarrhea. At the same time.

-When this happens in an enclosed environment (like a cruise ship, or, ahem, a dorm), many people can become very sick, and even reinfected. "If it's not controlled it can spread rapidly through oral-fecal-vomit from unwashed hands," Black said.

-70 percent of reported Norovirus outbreaks come from infected food that was caused by an infected foodservice worker.

-When foodservice workers don't get paid if they don't come in, they're more likely to come into work when they're really, really sick. "We know the hurdles of trying to get people to report the virus or stay home when they are ill," Archer said. "But some workers are afraid of losing their jobs."

-Norovirus is hard to kill.

-It's also hard to study. "It can't be cultured in a lab," Black said. She added that years ago, before such practices were put to a stop, Norovirus was intentionally given to a prison population in order to study the illness. (WHAT?!)

-In a large foodservice operation, Norovirus can come from anywhere on the supply chain. "You need to think from farm to fork, from boat to throat," Hernandez said. "You rely on your suppliers."

-Sustainability initiatives, like buying local, can be at odds with safeguarding the health of the people you are feeding. "You have to know where your food comes from, or sooner or later it is going to come back to bite you," Hernandez said.

If any of these facts freaked you out, even a little, that's a good thing! There are ways to really be ready for it, not surprisingly centering around having strong food safety procedures in place with your staff. But there are ways to go beyond that, in terms of being ready just in case.

"If a student calls and says, 'Hey, I ate at this dining hall and I'm not feeling well,' how do you handle it?" Archer asked. That's something this fomer LA health inspector is dealing with in his current job as senior manager of food safety, workplace safety and environmental compliance at Stanford.

Here are some words of advice on Norovirus preparedness tactics from the panel:

-When possible, go visit your suppliers, see the facilities and ask questions.

-Make sure there's no bare hand contact with ready-to-eat food.

-Be the kind of manager who checks in with employees a lot. Ask your employees if they're feeling well.

-If it happens, don't wait for the health department to shut you down. Do it yourself. Voluntary closure is the way to go, everyone on the panel agreed. (Lots of times whole dorms get quarantined, and the foodservice department must deliver meals to those affected students.)

-In the event of a Norovirus outbreak, be ready for the local media. When the cameras start rolling, you better have a prepared statement that outlines your plan of action.

-And to sum it up: "How can we prevent it in colleges? The main thing is to have a very effective food safety program with a system in place and continuously train employees," Archer said.