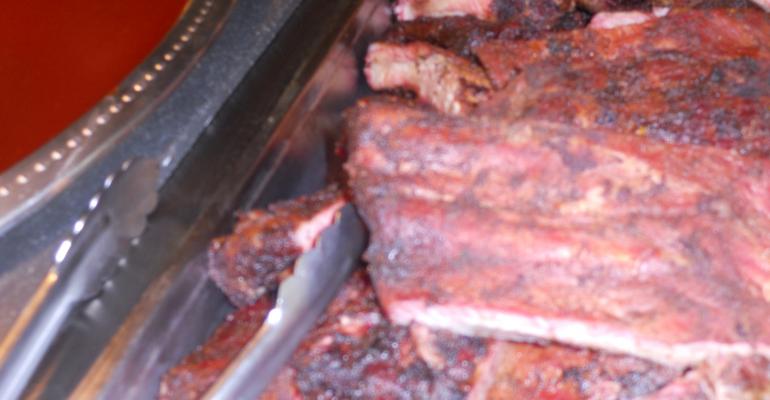 The Search for True BBQ

Lately for me, all roads seem to lead to sweet, smoky, delicious barbecue. It began earlier this year, when I had a great conversation with Roy Slicker of the National BBQ Association, who hopes to connect with more onsite noncommercial operators. Researching further into the backwoods of barbecue, I've been learning about different styles of sauces (including white bbq sauce—who knew?!) I’ve also been learning that the connection to fellow humans is a key component in barbecue culture.

That community spirit was present in literally everyone I spoke to for my upcoming ‘Smokin’ Hot BBQ’ story in the April issue of FM. I’ve been working on this for the past couple weeks, poring over high res photos of succulent ribs and brisket…getting a couple recipes for rubs and sauces. Finding out what to look for when purchasing a smoker unit.

But no matter who I was interviewing, at some point in the conversation, they would make a statement like, “If you leave out the heart and soul, it’s not going to taste as good.”

Good stories to share, too. I talked to one manager who runs the smoker at a large hospital in Alabama. He ended up there by throwing a dart at a map, “and it landed on Tuscaloosa.” He hunts squirrels with a .22 and knows the difference hickory vs. mesquite will make in a smoker.

There is a lot of friendly rivalry in the world of barbecue, but the key word is friendly. You could debate for hours with a newfound BBQ buddy: Is the eastern North Carolina vinegar-based sauce better than the sticky-sweet sauce you’d get in Kansas City? Is a perfect brisket BBQ plate better than a pulled pork sandwich?

With menus that rotate, onsite operators are positioned to offer a little bit of “something for everyone.”

But back to my newest discovery: white bbq sauce! I’d never heard of it before. Someone who grew up in the Tennessee Valley told me about it first, and then I spoke with someone else who makes a version with lemon juice instead of liquid smoke. It’s mayonnaise based and usually found on pulled pork or chicken.

Learning about the recipes and methods, I was struck by how much people like to share the experience of barbecue. So if you think in terms of the customer’s experience (which you should), barbecue is a delicious way to gain some “regulars” at your lunch counter. When your staff knows a certain customer likes to get the “ends” of the rib and puts them aside, there’s nothing truer in the world, according to those who do it on a regular basis.