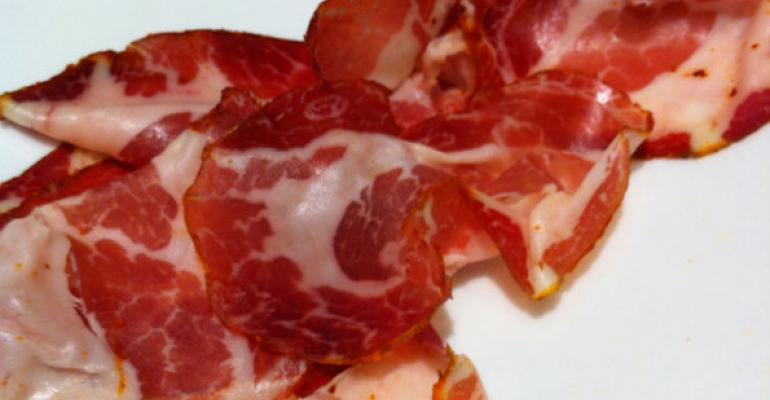 Seeing a whole hog being broken down is mesmerizing. Last week I was at the National Pork Board’s Pork Summit at the CIA in Napa, watching Stephen Gerike of the Pork Board make it look easy. Within what seemed like a few minutes, with the use of a big saw, sharp knives and a lot of muscle, an actual pig became what we see at the supermarket: chops, shoulders, ribs. And once that pig is destined for center-of-the-plate protein, it’s up to the chef to make the most of it.

Nose-to-tail eating is a big deal lately, and the versatility of the animal was the focus of the summit, which was attended by foodservice operators and chefs from around the country who won recipe contests, food media and some chefs who have built their reputations on the whole hog.

Demonstrations helped attendees get to know chefs better and also provided inspiration for new ideas and techniques. I love Puerto Rican food 4ever, so when I met Jose Enrique of Jose Enrique, San Juan, Puerto Rico, the first thing I asked him about was Pernil, my absolute favorite way to eat pork. He was familiar (of course!), and got a big smile on his face as soon as I mentioned it. During his demo, the whole audience was smiling when they got to try his simply perfect soup with cured shanks, total pork heaven.

Nose-to-tail, ok… but how often do you think of using the blood? Brad Farmerie of New York City’s PUBLIC has. “I always have a freezer full of blood,” he said in a way that I couldn’t help but think of a Brooklyn-based vampire. But when the blood sausage waffle with whipped foie gras came around, I took a bite and liked it!

showed us charcuterie techniques that he uses at Del Dotto Winery, just down the road in St. Helena, where he makes the prettiest jewel-toned and beautifully marbled salumi, coppa and something I’d never tried before: lardo. It’s the white part I’d instinctively eat around. Turns out it’s like butter, but porkier. Melts in your mouth.

Jonathan Waxman  shared a recipe that dates back to his late 70s Chez Panisse days, a salsa that would go great with pork. As he literally threw ingredients around the stage like a rockstar, I frantically wrote down his approximate salsa recipe: pineapple, brown sugar, sherry vinegar, saffron and a couple jalapeno and serrano peppers, cooked down in a pan, no puree, nothing, just cook it down.

When it was time for everyone to cook together in a competition, I was super lucky to be on Tony Incontro’s team. Each team had a half pig and a few hours to come up with and execute some innovative pork dishes. Incontro is super cool in the kitchen. By super cool, I mean, he gave everybody on the team a say in what we were going to cook. And then, heading into the kitchen, he made the work fun and efficient after we had decided on an Italian-themed selection. And I got to actually cook!

A little background: The first time I was ever in this CIA Greystone kitchen a year ago, I had just managed somehow with an injured finger to drive my rental car up from San Francisco where I had a run-in with a (very much alive) Dungeness crab (maybe another blog?) I was so freaked out, I vowed to not even pick up a knife at the CIA. But on my trip to the CIA San Antonio earlier this year, I picked up a knife—and some confidence thanks to a good instructor. So this time around, I was ready, but in a kitchen with chefs who cook every day? I know I can get in the way a lot. It seems like all I hear at times is, “Behind you! Hot behind you! Behind. You!”

So I was trying to stay out of the way, but I was pleasantly surprised the professional chefs on the team were glad to let me do not only prep work but to also work the line! I cryovacked lemon zest, breaded and pan fried some pork scaloppini...Our team made gnocchi and pasta by hand...just amazing how much better gnocchi can be! I was happy as a clam and as always, secretly thankful for my desk job--it is hard work! The professional chefs were feeling fine and just getting warmed up.

All the teams produced some amazing pork dishes. And after all the dishes were plated and photographed, after a long morning in the kitchen, needless to say—we all pigged out!