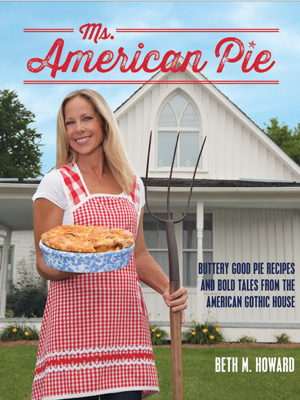 Beth Howard believes in the power of pie. She started out baking pies for celebs like Barbra Streisand (lemon meringue) and Steven Spielberg (coconut cream) at California’s Malibu Kitchen. But this book isn’t about star power, it’s about pie power: “…my hope is to spread love and goodwill in the world…homemade pie is the answer to world peace and, really, acts as a cure for just about everything.”

Howard, who now lives and runs a pie shop out of the iconic ‘American Gothic’ house in Iowa, believes in apple pies that can heal, pumpkin-gingersnap pies that can seduce and peach pies that can win at the state fair.

The healing power of pie has especially been present in Howard’s life. After the untimely death of her husband, she loaded an RV with pies and traveled around the country, sharing pie with those in need and starting a new journey in her life.