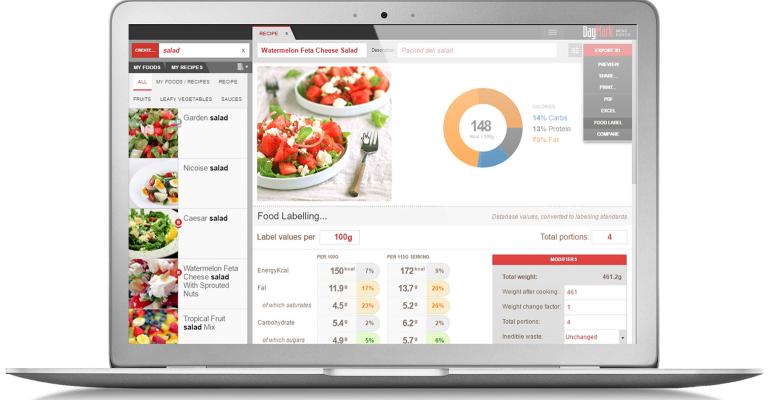 For many restaurant operators, the long-awaited requirement that all menu items be labeled with calorie counts followed years of planning and preparation. For others, however, the struggle to comply with the new law continues.

The requirement, which took effect May 7, was part of the 2010 Affordable Care Act. But the menu-labeling regulations took eight years to implement as regulators and industry groups wrestled with the details, and operators scrambled to get their recipes analyzed and their menu displays revamped.

The law requires foodservice chains with 20 or more outlets to post the calories per serving of each item on their menu. The intent is to help consumers make more informed choices about the items they select in the hope that they will use the information to structure healthier diets.

Here are some of the ways foodservice operators have managed the transition.

Getting an early start

Many of the largest chains began posting calorie counts well ahead of time, prompted by the patchwork of local laws requiring calorie labeling which had already emerged in places such as New York, and certain municipalities in Washington state and California. In many cases, the chains tested consumer response in these areas before rolling the changes out nationwide.

TGI Fridays implemented the posting of calorie counts in May of 2017, according to a spokesman for the Dallas-based chain. The company uses a third-party nutritionist to ascertain the calorie counts of its menu items, and validates the nutritional information with its in-house quality assurance team.

Brian Conway, the TGI Fridays spokesman, says the company did not make any changes in its menu when it first posted the calorie labels in its restaurants in New York and California.

“That gave us confidence that our guests would still order the same items they’ve known and loved for years, even with calories listed,” he says.

TGI Fridays currently is reviewing all of its menu items, and focusing innovation on a lower-sodium and lower-calorie model, Conway adds.

Seattle-based Starbucks also was among the leaders in rolling out calorie information on its menus when it did so at all U.S. locations in 2013.

“Starbucks has been transparent about what’s in our food and drinks for many years,” says a spokeswoman for the coffee-cafe chain. “Menu labeling is one way our customers and partners [employees] can easily access information about the food and beverages we offer and understand all the ways that they can customize their beverages to be within their desired calorie range.”

Starbucks timed the posting of its calorie counts with the rollout of new seasonal menus, which helped minimize the cost of updating its menu displays. But some operators say they have incurred tens of thousands of dollars in costs for new menu boards to meet the requirements.

Some operators, such as Another Broken Egg Cafe, have added more low-calorie items to their menus, according to a MarketWatch report. The chain’s menu includes a Sensible Selections section, featuring items such as a Skinny Omelette made with egg whites and a Granola, Fruit & Quinoa Power Bowl.

Another challenge operators face is ensuring that their calorie counts are accurate. Allison Tannenbaum, a nutritionist based in Westchester County, N.Y., who has worked with restaurants to analyze the nutritional content of their menu items, says different nutritional analyses of the same menu items can often vary and sometimes be inaccurate.

“It does help with mindfulness as consumers make choices about what to eat, despite inaccuracies in the information,” she says.

One way operators can ensure that their menu labeling is accurate and compliant is by partnering with the right third-party analytics firm.

“Operators have to be ready and willing to have the required information at their fingertips,” says Jill Carte, category manager of kitchen automation at DayMark Safety Systems. “This can be a challenge, especially for small businesses which may not have access to the labs and databases that provide this data. We hope to help them with that through Nutritics.”

Nutritics, a cloud-based recipe ingredient analysis platform that is available in the U.S. exclusively through DayMark, has a robust database of items, which allows operators to change recipes on the fly, she says.

“This will help drive down costs by preventing spoilage and allowing the restaurant to be more agile in making and recalculating those changes,” says Carte. “Operators will no longer be burdened with sending recipe changes that may have happened in the moment to an outside lab or another facility or service to calculate those changes — they can do it instantaneously on their computer.”

The data can then be pushed into DayMark’s MenuPilot app, generating updated information for grab-and-go item labels and menu displays as needed.

“Further, with this information displayed on the digital menu boards in real time, calorie counts are updated instantaneously and there is no concern over printed content expiring,” says Carte.

Some noncommercial foodservice operators, especially those in the college and university channel, have long been posting nutritional information to meet the demands of their health-conscious student populations, says Joie Schoonover, a consultant with Rippe Associates, a Minnetonka, Minn.-based consulting firm specializing in noncommercial foodservice.

Many of these operators use software to calculate the calories and other nutritional information, and then post it either on a website or on the serving line, she says. Some post the data directly to digital menu boards, while others display a QR code next to items on a display near the serving line, which allows students to view the nutritional information about the items they are interested in.

“I have seen it done a lot of different ways,” says Schoonover. “None are right or wrong. It just depends on the operation.”

Sponsored Content
Robust recipe analysis — only a cloud away
Oct 30, 2019