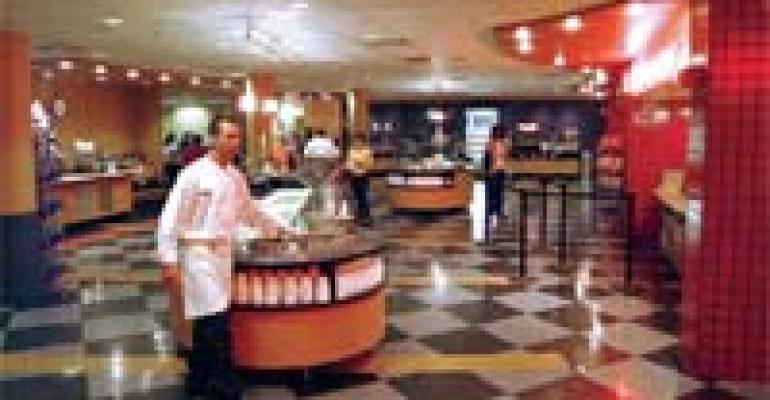 There's something for everyone in the array of dining choices at the sprawling Washington campus of the National Institutes of Health.

When “Health” is part of an organization's name, you know wellness has to be a big part of the retail dining equation. But at the main campus of the National Institutes of Health in Bethesda, MD, popularity doesn't take a back seat either. Pizza, burgers, barbecue and homestyle entrees are there every day for those who wish to indulge.

That means a delicate balancing act for the in-house dining operations, which primarily consists of a series of nine dining centers and coffee kiosks managed by Eurest Dining Services, a unit of Compass Group North America. Additional onsite dining options are offered in seven c-stores scattered across the campus that are operated by independent visually impaired owners under the federal Randolph-Sheppard Act.

(There is also one other dining center run by the Recreation & Welfare Association, an in-house organization that offers social, athletic, wellness, education and special interest activities to employees of NIH and of the National Oceanic & Atmospheric Administration. R&W also manages some vending and gift shops at NIH, though the bulk of the vending operations are handled by another Compass unit, Canteen Vending Services.)

The NIH main campus takes up 322 acres in a prime area north of Washington D.C., just inside the Beltway. The complex, which houses research facilities, administrative offices, outpatient clinics and an in-patient hospital, has some 18,000 staff on site each weekday, plus a nearly equal number of contract workers and visitors.

The dining outlets designed to serve this large onsite customer base have been undergoing a steady program of renovation and updating in recent years under John Crawford, who took over as Food Program Specialist for NIH's Division of Amenities & Transportation services five years ago.

Evolution of a Dining Program

Crawford's mission is to upgrade the dining to provide more choice, convenience, daily and day-to-day variety and, of course, healthful options (plus keeping the program self-supporting). When finished, the array will include a number of outlets with unique offerings that can serve as “destination” dining places on the campus, along with strategically placed mini-cafes that offer grab-and-go meal options along with gourmet beverage choices.

Currently, the dining mix at NIH is concentrated in the Clinical Center building and its ACRF (Ambulatory Care Research Facility) adjunct. The facility has a main dining center with several nationally branded stations, a separate branded Au Bon Pain kiosk, plus a non-branded multi-station cafeteria called the ACRF Dining Center on the second floor.

The Clinical Center (also known as Bldg. 10 on the 70-building campus) houses about a fifth of NIH's staff, making it by far the largest building in terms of its onsite population. That accounts for its outsized share of campus dining outlets.

The main cafeteria in the building sees some 2,500 customers just at lunch and pulls in around $15,000 a day in total sales. The ACRF dining center on the second floor generates another $4,000 a day and the Au Bon Pain, located in a foyer a little distance from the main dining center, generates up to $8,000 more with its array of quick grab and go favorites, baked goods and hot and cold beverages. The NIH campus as a whole generates around $40,000 in daily foodservice sales (exclusive of the c-stores).

In addition to the outlets in the Clinical Center, there currently are also full dining centers in four other buildings: the main administrative center (Bldg. 31), the Porter Neuroscience Building (Bldg. 35), the Natcher Conference Center (Bldg. 45) and Building 1. Two cyber cafes complement these eateries with their stripped down grab-and-go focused menus.

Each of the dining centers includes a kitchen where prep work and grab-and-go assembly can be accomplished. The kitchen in the Natcher Building, which includes a conference center, is the largest and is the hub for onsite catering, much of it associated with conference events held there, including many on health and wellness topics. It also produces much of the grab-and-go satellited to the cybercafes, which have no production facilities.

The main dining center in the Clinical Center building was one of the first to undergo an overhaul, adding impact brands (including the first Austin Grill Express outlet in the country in the spring of 2008).

The eatery also features a Sbarro pizza station, as well as Eurest's Wild Greens salad concept; Cultural Cuisines, an international station that features among its popular offerings fresh sushi made in front of customers; and an entrée station with daily specials ranging from healthful selections like vegetarian options to traditional favorites like chicken Cacciatore and meat loaf.

The ACRF Dining center has grill, deli, entrée and soup stations as well as a salad bar and a daily “Menutainment” offering. It is also open evenings and, exclusively, on weekends (the Au Bon Pain is open through 8 pm during the week while the main dining center serves only breakfast and lunch on weekdays).

As part of the ongoing upgrade program, the ACRF center will soon get $100,000 or so in “deinstitutionalization,” says Crawford.

“It will mean adding some brands and getting away from entrees that are dipped out with large spoons,” he explains. “We'll have a lot more action-oriented stations while still retaining our popular standards like the grill and the deli.”

Nearer to completion is a redesign of the cafeteria in the administration building. Crawford says the goal is not just to upgrade offerings but to solve traffic flow problems. “The counters are too closely spaced right now,” he says. “They don't allow for much program flexibility. We'll have the same footprint when we're done, but we'll blow out the service lines, move things around and have satellite stations spread out in the cafeteria.”

The plans call for a second Austin Grill in this space along with another fresh sushi operation. It is slated for completion this spring.

Another project currently underway and scheduled to finish around that same time is a revamping of the cafeteria in the Porter Building into a branded O'Naturals outlet. O'Naturals is a commercial QSR concept that has a strategic partnership with Eurest to place its outlets in onsite locations. The menu features natural, organic, wild-caught and locally sourced ingredients in offerings such as flatbread sandwiches, pizzas, soups, tossed salads, Asian noodles and fresh baked goods.

The Porter O'Naturals conversion represents the first step in Crawford's plan to revise the dining approach at NIH to introduce variety across the locations. “We've focused on the four largest operations to start,” he explains.

“The others are still in the preliminary planning stages, but they will all have distinct identities that will emerge as we go further through the process. Some may focus on a certain type of cuisine, for example, but each will be a kind of destination restaurant on the campus.

“We're located in close proximity to essentially every form of cuisine on the planet just outside our perimeter, and we have a very ethnically and culturally diverse population, so a cookie cutter approach to dining is even less successful here than it might be somewhere else.”

Of course, “successful” is a relative term, as Crawford also estimates that his onsite dining operations currently capture almost two-thirds of the potential business on the campus, which of course is predominantly lunch business. Yet, he also feels that given broad cultural preferences toward more interesting and authentic food choices, and given his sophisticated customer base, he has to make a move to keep his customers coming back.

Other than the dining centers, the NIH campus currently features two cyber cafes, coffee bars that offer grab-and-go salads and sandwiches, pastries and specialty beverages, along with laptops to allow customers to sit and either relax or do some work online. One offers Starbucks branded coffees while the other is a unit of a prominent local brand, Mayorga Coffee, a minority-owned business that markets “fair trade” style organic coffees.

The Mayorga station is located in the vaccine research building on the grounds, and has recently enjoyed a participation boom. The outlet was originally initiated as a convenience to the researchers working nearby even though traffic was minimal. However, that is no longer the case, says Crawford.

“We changed the programs to be more consumer-oriented, adding more food items and rebranding to the Mayorga name,” he says. “They have driven sales to the point that the location is now viable.”

A third cyber café is planned to open in Bldg. 35 in a couple years, near the new O'Naturals outlet.

While adding variety and convenience are strategic goals clearly well under way to fulfillment, the goal of adding more healthful options has taken a little longer.

As part of its program, Eurest had brought its Balanced Choices healthy dining program to its NIH dining outlets three years ago. Balanced Choices is a company program that offers menu options meeting different nutritional and ethical criteria, each identified by different designations: low-fat, low-calories, organic, etc. The program is well established at many Eurest managed locations, meeting their needs for easily identified choices that satisfy their dietary concerns.

“Our customers know what they talk about when it comes to nutritional claims,” explains Crawford. “In the end, we had to modify some of the designations so that they are not so marketing focused but more nutritionally accurate.”

The “modifications” involved meshing Compass' criteria with nutritional standards based on FDA and NIH guidelines, which in many cases were stricter and more precise.

“Our nutritionists worked with them on the terms,” says Crawford. “They looked at the nutritional makeup of the meals in terms of fat content, trans fats, sodium content to make sure they are truly nutritious, that they are consistent with what truly constitutes ‘low fat’ or what ‘no sugar added’ really means. Then they modified the icon guides they use to designate the different choices to reflect those nutritional requirements.”

The revised designations were given to the NIH's Nutrition Education Subcommittee for an informal but “fairly rigorous” review on its scientific and technical accuracy and its consistency with the FDA's 2005 Dietary Guidelines for Americans. Only after passing those steps was Balanced Choices relaunched, about a year after the original debut.

It's been positively received, Crawford notes. There were no negative comments, he says, and volume jumped about 12 percent right after the relaunch, showing considerable demand for healthful choices.