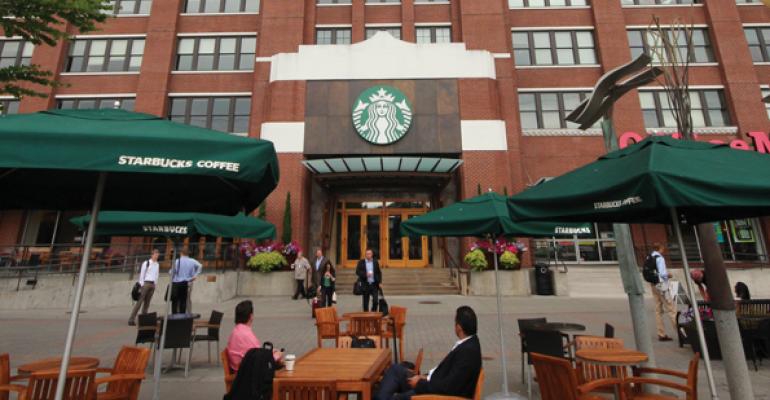 Public seating on the large patio facing the Starbucks Center entrance attracts a broad cross section of the SoDo community throughout the day.
News & Trends>Business & Industry

The massive complex originally housed Sears&rsquo; western distribution center when it was built in 1912

SoDo—South of Downtown in Seattle’s old industrial area—bustles with activity in the morning, filled with the sounds of traffic and train horns, of trucks backing up for deliveries, of workers hurrying to jobs. Gentrification is still proceeding modestly here when compared to an area like New York’s SoHo. Even as some older structures have been converted to artists’ lofts and offices, many still house warehouses, manufacturing and distribution facilities. In a landscape of low-slung buildings, nine-story Starbucks Center sticks out—and fits right in—at the same time.

The massive complex originally housed Sears’ western distribution center when it was built in 1912; today, it is the largest and oldest U.S. building to have earned national green certification. With over 2 million sq.ft. of space, it was re-developed in the 1990s for multiple tenants. Starbucks’ decision to site its headquarters here in 1997 gave it a new anchor and name as well as a representation of the company’s iconic, crowned mermaid to cap its nine-story tower.

The district doesn’t offer many retail dining options, and when a former tenant’s commissary relocated, Starbucks collaborated with building owner Nitze-Stagen, design firm Mesher-Shing-McNutt and a new provider, Bon Appétit Management Co., to create the 3rd floor Sodo Kitchen and two other 5th floor dining venues. Their exceptional execution demonstrates a corporate commitment to dining as part of Starbucks’ core culture and has earned the company FM’s  recognition as our 2013 B&I Innovator of the Year.

At the time design work for the new dining facilities began in 2010, the building itself was undergoing major structural renovations both to modernize its space and to address issues related to damage from the Nisqually earthquake several years before.

By all accounts, Arthur Rubinfeld, Starbucks chief creative officer and president of global innovation, provided a major impetus to the project. Rubinfeld had been a key member of CEO Howard Schultz’ original management team and, like Schultz, had returned to the company to help drive its business turnaround in 2008.

A registered architect and acknowledged brand visionary, Rubinfeld oversees Starbucks’ global store design strategy for more than 17,000 units around the world. He also leads the company’s customer experience initiatives and saw the Sodo Kitchen project as part of a strategy to re-establish a sense of the Starbucks culture among the company’s  employees, community, partners and visitors.

“The café helps fulfill our mission just as much as our stores do,” says Jay Phillips, Starbucks’ director of facilities development and operations.

“Our employee needs were growing and Starbucks decided it was time to influence how food was offered to our own employees just as it does for its store customers.”

In 2010, after issuing an RFP, Starbucks awarded a long-term contract to Bon Appétit that called for it to provide consulting services during the design phase and to provide foodservice at the site via its locally iconic Monte Cristo food trucks while construction proceeded.

“Starbucks Design—our own team—wanted the major say in the look and feel of the dining space,” Phillips adds. “Just as with our stores, our goal was for the café to be a ‘third place’ that welcomes the community and nurtures the human spirit.


“Sodo Kitchen is open to the public. While its mission was not focused on capturing foot traffic, we did want to provide a unique atmosphere and café the neighborhood did not have.”

That goal was clearly accomplished when the facility opened in October of 2011. The company already operated a “mini” Starbucks just inside the main entrance to headquarters building and its regular clientele could easily take the elevator up to check out the new facility on the third floor.

There, the Sodo Kitchen entryway dramatically positions the café’s scratch cooking, locally-sourced ingredients and emphasis on sustainability and social responsibility.

Nearby, a long “Hall of History” presents framed photography that traces the development of the Sodo area and its contributions to the growth of Seattle.

“Starbucks is really the ultimate partner for us because of its reputation for world-class customer service,” says Brian Wilbur, Bon Appetit’s long-tenured regional manager.

“Both of our companies are very aligned in terms of values like sustainability, building community and establishing an employee-centric culture.

From inside the café, a signature rotisserie station and fresh vegetable displays beckon to customers. Turning the corner,  they are greeted by the wide variety of food offerings and seating options inside.

Sodo does not have the advantage of window lighting, but compensates for that with custom globe fixtures, track lighting for food display accents and large lamp shades made from burlap coffee bags that produce a warm glow throughout the seating areas.

Patrons move through the servery in a circular fashion, selecting from rotisserie, deli and grill stations, an expansive salad bar, an international counter with a tandoor oven and a hearth oven/flatbread station. The Rotisserie and Salad Bar stations are the biggest revenue generators.

Healthy grab-and-go sandwich and beverage offerings round out the mix, with check averages running $4-5 for breakfast and $6-8 for lunch. (They run between $5-11 in the employee-only servery on the fifth floor).

An automated Starbucks single-serve coffee brewing station faces a high volume
cashier counter. From there, customers have a choice of many seating options in space that can accommodate 400. It includes single and community tables, restaurant booths, highboy counters and areas designed to facilitate small meetings among employees, which are commonplace throughout the day.

A Stairway to Little Pond

Headquarters employees have more convenient access to the third floor via wide central staircases that lead down to Sodo from the company’s upper floors. Because the elevator system is still original and often operates full-time, the stairs are in frequent use.

The central stairwells were added during the renovation and provide an alternate route to Starbucks-only office space and an additional dining facility on the fifth floor. That houses a colorful taqueria on one side and Little Pond, an upscale sushi and noodle bar, on the other.

In fact, Little Pond has become the “go to” restaurant for the company’s corporate meetings, according to Bon Appétit GM Rick Stromire. At the same time, the tacqueria offers a lower meal price point for employees looking for meal value.

A full-blown, company-operated Starbucks store for employees is located on the eighth floor and reportedly is one of the highest grossing stores that the company operates.

College and University Innovator of the Year
Jun 20, 2013