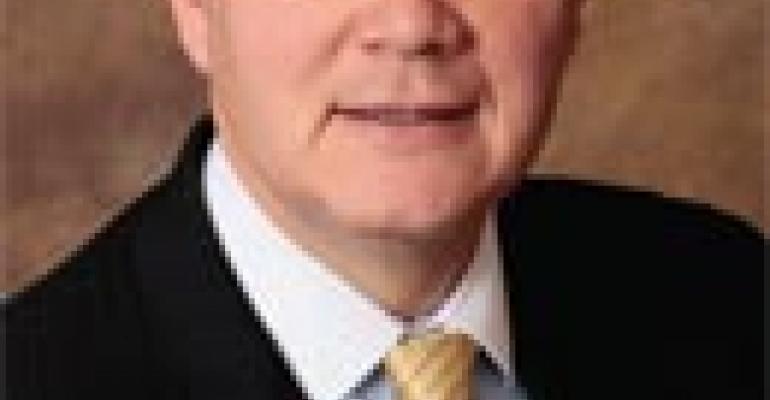 In an era where a troika of corporate giants dominate the contract side of the foodservice business, carving a successful niche for a local, family-owned firm can prove a daunting task. It's especially daunting when the niche must be carved in the highly competitive New York/New Jersey market, where, aside from the Big Three, a number of other hungry regional firms also jostle for market share.

But Robert Whitcomb has led his company, Whitsons Culinary Services, not only to success, but, dare we say, prosperity. How else to characterize a track record that has seen Whitsons grow top line revenues from $29 million in 1998 to $100 million last year?

That track record was a big reason IFMA chose to honor Whitcomb as the 2009 Silver Plate Award winner in the B&I/foodservice management category.

Under Whitcomb, Whitsons has been an innovative presence in the onsite foodservice industry, not just a successful one. It was one of the first management companies in its region to provide a food court style of service to its public school accounts, a pioneer in adopting a corporate-wide policy of ServSafe training and one of the first to introduce a full line of authentic vegetarian and vegan entrees to college and business clients. It is also one of the few regional contractors to offer a complete line of signature branded food station concepts.

Looking at Whitsons today in its 55,000-sq.ft. state-of-the-art headquarters complex (a former McDonald's distribution center to which it moved in 2006), it's hard to imagine that this was an enterprise teetering on the edge of going under in the mid-80s. At that time, it consisted of a pair of diners in Garden City, NY, slowly sinking under an onerous debt load.

It was at that point that Bob Whitcomb led his siblings into a series of business decisions that not only saved the concern but put it on the path to its current success. One was to begin concentrating on onsite foodservice (the diners originally broke into this side-business by catering lunches to some area businesses). That eventually led to other segments, especially K-12, now a major area of concentration.

The second key decision was to enter the food production business. Today, Whitsons' Culinary Development Center takes up the bulk of the headquarters complex. It's where a staff of research chefs, food scientists, RDs, food technicians and production personnel design and test new recipes, produce meal components for the company's onsite divisions and prepare complete meals for senior dining programs and — a recent new niche — the direct-to-consumer market.

Bob Whitcomb oversees this many-faceted family enterprise as a sort of first among equals with his brothers and sisters and other non-family members of the Whitsons team. Through it all, Whitcomb has also found time to serve both the onsite community and the larger community — Whitsons was among the most prominent foodservice concerns to lend a hand and organize the industry's response during and after 9/11. He also served a term as president of the Society for Foodservice Management (SFM) and continues to be active in the industry. (For more on Whitsons, see the FM cover profile in the March 2003 issue)

What do we do to deal with today's economic environment? We work backwards [from the client to the customer]. The clients say, ‘Listen, we're under stress here. We can't take a price increase. What can we do?’ We come back with a program like our Target Five concept, which gives people a complete lunch with beverage for five bucks. When they're in a situation like today, the client has to feel that they've got someone who's really trying to help them.

We need to keep our customers coming in and using our services. We have to find better deals and promote them to the customer so that they don't fall out of the habit of coming in.

People ask me, ‘What's the common thread between where you are now and where you started?’ I think it's that we've always treated our customers and our people with dignity. Our customers always felt special, felt like they were cared for. That never has changed, from when we started to this very day, and as a result it has helped us to grow the business. Certainly, we had to learn the elements of all the different businesses, but that's the common thread.

We would not have survived had the onsite business not opened up. But we had to grow into it. We had paid so much for the restaurants, magnitudes more than they were worth, but we made the deal and had to live with it. Still, we could not have survived if we did not have the growth offered by corporate dining.

When we first looked at the school market around 1987, we could not understand how you could be in that business because the price points are so low. But there were people in the business, so I went to speak with one and asked him, ‘Tell me how this works. I'm coming from the restaurant side and this doesn't add up.’ So he explained to me how you have to work with the commodities and make your menu around that, and then run a tight ship. Honestly, it took us 10 years to understand the school business. And now it's our major segment.

I would not pretend that we had this great vision. Initially, we were in over our heads and we needed to do something to survive, so we grew by force of nature, and from that, we discovered wonderful opportunities. That's been the story.

Sometimes the business imperative is so strong that you're forced to find new opportunities, and that has been a constant theme in growing our business. Only through action do the opportunities reveal themselves. They're not visible simply just contemplating them.

Everybody's feeling the crunch right now, no question, but as we talk as a family and as an executive team, we say to ourselves, ‘You know what? This is going to make us a better company.’ Because when you have this kind of external pressure on you, it forces you to find the opportunities. And sometimes I think we need a little pressure on us to look at the business in a different way.

I'm very proud of our team and how they performed in the 9/11 feeding. I'm proud of saying yes when that call came in and putting the company in a place where it had to perform. And our team did in fact perform admirably.

My dad had told my brothers and me, ‘Listen, guys, when you graduate, we're going to go into business together.’ Unfortunately, of all things, he had his eye on these two restaurants, even though he had no food experience at all. But he said, ‘They're in a great location, this is a world-class community. You guys will do well.’ Well, we paid way too much for the doggone things, and we didn't know anything about the business, so we went from the frying pan into the fire pretty quickly. We were soon losing money hand over fist.

After my dad died, we had a family meeting to talk about what we were going to do — are we going to stay in business or abandon it? It wasn't even a matter of selling, but just closing it. I'll tell you, we thought about it and we might very well have done it had not the stakes been so high. My dad had bet the house on the business and he had left no life insurance, so there was no place to go but up. So we made a real conscious decision to commit ourselves to the business, to what it would take to be successful, and how we would reposition it.

We made that decision as a family and from that point in 1984, when we had that meeting, to this day, our business has grown, sometimes only a little bit each year, but it grew and we never went bankrupt, never gave up our debt, and never hurt anybody. We worked our way back.

We repositioned the business, slowly emerging into the onsite end from the restaurants because our customers had asked us, ‘Come on in and serve us in our workplace.’

In a way, it was fortunate for us that failure was not an option, because I'll tell you, I would have taken it. That time was just so difficult.