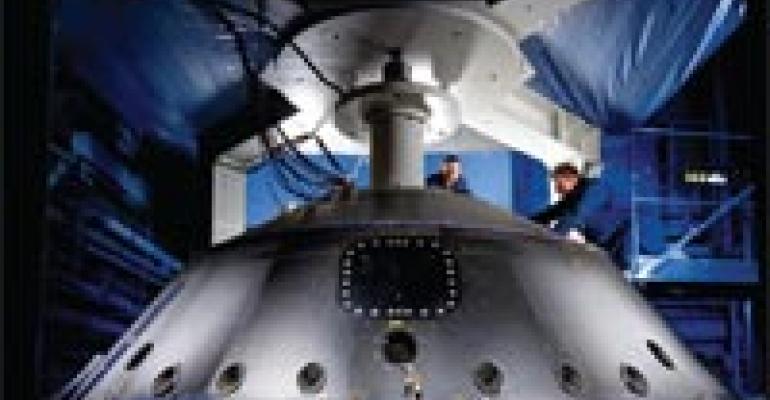 Dining That's Out of This World

It may not be rocket science, but feeding the staff at NASA's Jet Propulsion Lab is still challenging.

Space may be the “final frontier” but rocket scientists still have down-to-earth appetites. Maybe that's why, at the Jet Propulsion Laboratory in Pasadena, CA, the responsibility for feeding some 5,000 scientists, engineers, academics, administrators and other professionals — plus another thousand or so support personnel — falls to a department historically attuned to the down-to-earth dining habits of college students.

That department is the campus dining services of JPL's next-door neighbor and parent organization, the California Institute of Technology, better known as Caltech. JPL is operated by the National Aeronautics and Space Administration (NASA) under contract with Caltech.

For JPL, whose main complex sits directly adjacent to the Caltech campus, Caltech Dining Services (CDS) manages four cafes (one offsite) and a pair of kiosks, and also provides onsite catering. It's a different kind of operation for CDS, one that is managed as a distinct operation from the campus dining activities. Dining at JPL has its own P&L, facilities, personnel and menus.

The relationship gives CDS advantages in economies of scale, especially in the area of purchasing. On the other hand, it requires the department to develop and maintain a dining program that can meet the needs of a somewhat different customer base, one with different perspectives than the young adults at its university venues.

To meet that challenge, CDS has responded recently with a menu reinvention program designed to better appeal to JPL customers. Early returns on the revamp have been positive even in the face of the economic slowdown that has JPL staffers as concerned as those at any other B&I location.

“It's a kind of a hybrid of contract relationship,” explains Bonnie Gerszt, Dining & JPL Store liaison. “We work for the same people, the same organization. We are all Caltech employees. My paycheck says California Institute of Technology.”

Despite that, the JPL environment poses cultural and operational challenges for CDS.

There's no meal plan, for one thing, to provide a guaranteed revenue base. It's all retail and, like most B&Is, primarily a lunch business. And, unlike many college students, JPL's adult staff is very sensitive to economic conditions. When times are hard, onsite dining is affected.

To keep up customer counts and improve satisfaction, CDS initiated a major redesign of its program in the past year. The reinvention includes upgrades of many of the ingredients used, more fresh preparation onsite and a greater attention to menu variety.

“You can't have the attitude that the customer is a prisoner,” says Marvin Greenberg, CDS's general manager at JPL. “He can go elsewhere. We're only a few miles out of a community that has a fair number of restaurants, so we have to fight for our customers as if we were out in the real world.”

Part of the campaign to keep those customers onsite involves substituting higher-end products like all-breast meat turkey, premium burger patties and eye of round pork cuts in some of the offerings. Of course, these products come with higher price tags, but CDS mitigates that with aggressive use of its volume clout, combining purchases for the campus and JPL programs. It has consolidated around a limited number of vendors that can supply product for both operations.

“We use many of the same products at both sites, but they have a much more diversified menu there than we have here,” Greenberg says. Where menu items overlap, the same ingredients are used. The operations share the volume discounts, since they are part of the same buying program.

Another strategy to increase menu appeal is more onsite production. While CDS traditionally offered two freshly made entrée choices each day in each cafe, many others — soups, grab-and-go salads and sandwiches — were bought premade.

Now, the sandwiches and salads are made onsite from fresh ingredients, many also freshly prepared. For instance, instead of buying pre-cooked turkey, CDS now bakes breasts in its own kitchens.

CDS operates three cafes on the JPL main campus. While the daily menu is 85-90% uniform — all cafes have grill, deli, pizza and Chef's Choice (entrees of the day) stations — there are variations to accommodate different customer bases.

For example, Cafe 190 is in an area of the campus with a large concentration of support and contract workers, more of a meat-and-potatoes crowd that prefers more traditional foods. So Cafe 190 emphasizes sandwiches made with hand-carved roasted meats, and its salad bar has a Mexican emphasis to meet customer preferences. It sells more desserts than the other locations.

Cafe 167, near the main offices, draws more upper management and administrative personnel. Its signature centerpiece is a Mongolian grill that allows customers to create their own starch/vegetable/protein rice and noodle bowls.

The standard menu items (delis, pizzas, grilled items, entrees of the day) across all cafes give CDS economies of scale in purchasing even though production is done at each site kitchen. Meanwhile, the unique offerings — the Mongolian grill, the bento boxes, the carved roasted meats — give each location a “branded” touch of exclusivity, a feeling of being in a distinct “restaurant.”

Besides the three cafes, CDS also operates two kiosk carts at JPL. One is in the center of an open outdoor seating terrace to take advantage of Southern California's year-round mild weather, and the other at the entrance to the JPL Store gift shop. The kiosks serve specialty coffee drinks, ice cream, pastries and grab-and-go sandwiches and salads made in one of the cafe kitchens.

CDS also operates Cafe 602 for JPL is at a business complex several miles from the main campus. With only about 500 employees, the location would ordinarily not merit onsite foodservice, but JPL wanted those working there to get the same amenities the main complex enjoys.

Cafe 602 has no production kitchen, so CDS simply transported food there from the main complex until recently. Now, the emphasis is on more onsite to-order production, with a Chef's Choice station offering a tostada/burrito bar, Asian rice/noodle bar, American favorites, Italian favorites and Southwest favorites on different days of the week to complement its fresh baked pizza, udon noodle bowl and deli stations.

Greenberg believes the customer counts across the cafes have room to grow. So far, CDS has concentrated on building variety and boosting quality and consistency. It hasn't yet done much in the way of promotion and marketing. When it does, Greenberg believes, meal counts will tick further up. “You want to have your house in order before you invite new folks in,” he says.

Catering is also getting an upgrade. Previously, food was prepared in the university kitchens and brought over, but that tended to degraded quality. So, “about a year and a half ago we brought some of the catering production over here with plans to bring the rest over eventually,” says Gerszt.

CDS recently shut down Caltech Catering at the university in a cost-saving measure, accelerating the conversion on the JPL campus, where catering continues to be a robust activity.

As part of the upgrade, the catering menu is being overhauled. “We're now providing what we think is a good cross-section of foods,” Greenberg says. “They range from ‘drop-and-go’ type fast food/pizza/chicken wing kinds of items to buffet items. We can handle anything that is under a hundred folks and doesn't require captains and wine stewards.”

The capabilities have also expanded, he adds. “It's more than just sending sandwiches to one location for a group of six businessmen. We're now able to bring people in and do birthday cakes and set up rooms for them or areas of our cafes. It's exciting for us because we have an opportunity to provide a product and service that is going to be new and one I think will be well received.”

Giving customers what they want is ingrained in Greenberg, a veteran of large volume retail foodservice environments like racetracks, hotels and casinos.

“You need to learn the customer and the idiosyncrasies of a particular location,” he says. “The foodservice here is not that much different than at a country club, where you're dealing with the same folks on a regular basis and the customers themselves have a proprietary ownership of the operation and they feel it's their restaurant.

“While you always have the desire to take care of your customers, because that's how you build business, here it's like dealing with your neighbors. You see them every day. From that standpoint, you want good relations with the guy across the fence from you.”