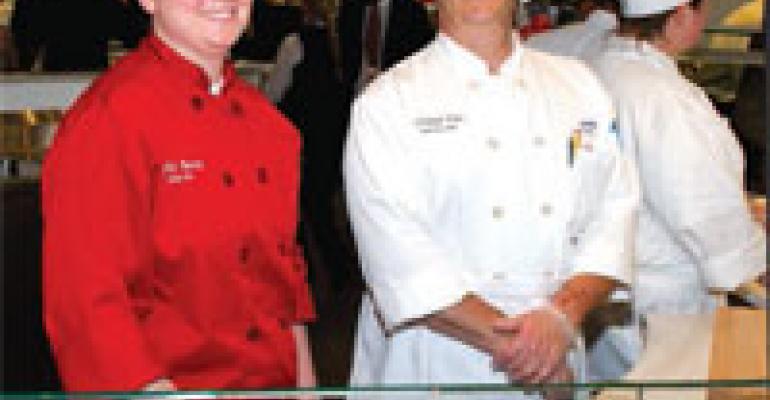 Meet the chef who runs the key station in the Campbell's employee café.

Sandra Slevin has a critical job for the Sodexo-managed café operation at Campbell's recently opened employee center in Camden, NJ: she runs the soup bar as a sous chef. When you think about it, that's like being in charge of IT at Microsoft or the coffee machines at Starbucks.

But Slevin is confident she can do the job, and so far she has been up to the challenge. The station serves nine different choices daily. Most are company products but at least two are prepared from scratch, including a daily entree soup, and Slevin is in charge of creating them.

It's quite a responsibility for a young chef who joined Sodexo in 2004 right out of school at the Art Institute of Philadelphia. She first worked for Sodexo's corporate dining arm as a sous chef/line cook at Ace Furniture, then moved on to Sodexo's operation for Lockheed Martin in Newtown, PA, before joining the team at Campbell's when the employee center opened this past April.

It's close to home for the Philadelphia native who grew up helping around the kitchen but chose cooking as a career only after some extensive internal debate.

Why did you join a management company?

I just wanted to gain knowledge wherever I could. Actually, a teacher first recommended me. I interviewed along with several others from the school and got the job.

What were your early experiences with corporate dining like?

Ace was a lot of private dining. Lockheed was very different because it was much more of a cafe operation for engineers. That was a big change! There were about 1,100 people in the building. I was sous chef, made soups and worked the grill. We did about 300 for lunch and maybe 150 for breakfast.

How did you wind up at Campbell's?

“Chris Wellington [Sodexo's GM at Campbell's] recommended me for the soup bar position.

Big responsibility at Campbell's! Where do the recipes come from?

I've sort of been creating my own. Everything from cheeseburger soup to wild mushroom soup with sherry to corn and crab chowder to spicy lentil. The only restriction is that I have to use a Campbell product, such as a broth.

What was your biggest hit?

I did a roasted root vegetable soup with parsnips, turnips, rutabaga, carrots and even some potatoes, I think. I roasted everything and then pureed it. And they LOVED it.

How many customers get soup?

I'd say that about 70-75 percent of people who come through the cafe get soup, and we get around 750 a day for lunch.

I was always helping in the kitchen growing up. We were a meat-and-potato family so I learned the basics from my mom.

What were some of the favorites?

We always had fried chicken, and my mom's meatloaf was really good. So was her macaroni and cheese.

When did you start thinking of cooking as a career?

I went to community college for about a year and hated it, so I decided I'd go work in the real world to give myself some time to figure out what I wanted to do with my life. I ended up working in a t-shirt factory with a lot of older women, and all they did was complain. I thought, ‘I'm not going to end up like this.’ Well, I had always watched the Food Network, so I just figured, ‘You know, this is something that I can do and be happy with.’

Truthfully, just as classes were about to start, I thought, ‘Oh my God, I don't think I can do this!’ I was actually going to change my mind and go to nursing school! But my boss at the t-shirt factory told me, ‘I don't think you want to go to nursing school; I think you should stay with cooking.’ He was right. Sometimes I do wish I could go back and learn some more of the things that I missed the first time. But then, I'm learning a lot just from being around other chefs here and from experience. And that's what I love about this place.