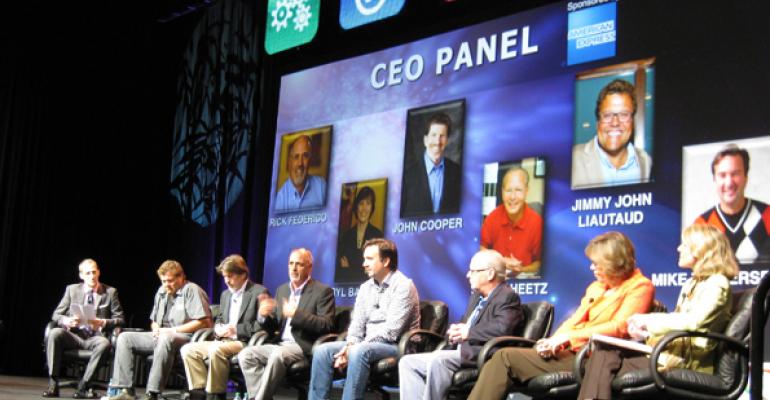 This is part of Food Management's special coverage of the 2012 MUFSO conference, taking place Sept. 30-Oct. 2 at the Hilton Anatole Hotel in Dallas. Tweet with us using #MUFSO.

Menu labeling and the economy were among the chief concerns addressed during the “Award-Winning CEO Panel” Tuesday at MUFSO. 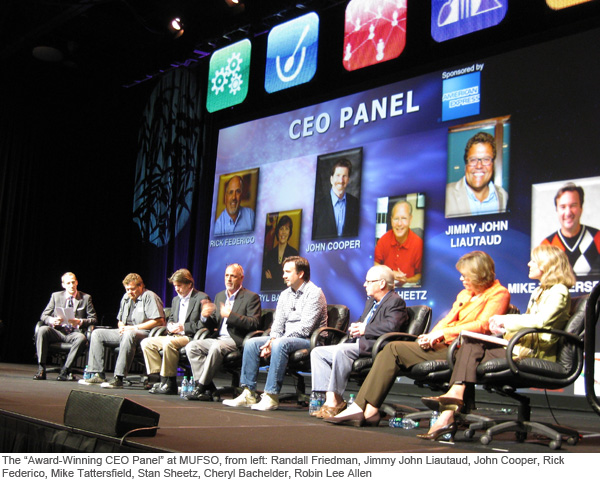 “We see several challenges,” said Sheetz of the Altoona, Pa.-based convenience store chain. “We’ve seen the consumption of fuel continue to decline. It’s declining roughly 2 to 3 percent a year since at least 2007.”

Managing in a declining gas-sales market is difficult, he added, especially given that tobacco sales, another staple revenue stream for c-stores, are also declining. While those two areas are declining, food is increasing, Sheetz said. The units are built, owned and maintained by the company, and Sheetz said the company is set to grow at about 25 to 30 units per year.

Staffing for growth is a challenge, he added, even though store manager turnover is a only about 5 to 6 percent a year. “We’ve still got to put together 60 to 70 leaders every year to keep the business growing and running,” Sheetz said.

“There is a need to stay fresh and refresh,” he said. “You can’t sit on your hands. I don’t think any restaurant in this industry today cannot afford to continue to change.” Cooper said innovation and change has to be aggressive.

At Caribou Coffee, which saw a run-up in coffee prices over the past several years, Tattersfield said, “We’re actually on the tailwind side. We don’t see that as a challenge going forward. But it’s what you do with that tailwind. How are you going to reinvest it into your business?”

Re-establishing value in the P.F. Chang’s China Bistro and Pei Wei Asian Diner brands is important in the year ahead, said Federico. “We’ve probably dialed back the innovation,” he said. “We used price to protect margin. In the past, we’d used price to offset costs that we knew weren’t going reverse … That means we would be taking price in our stores every couple of years.”

In 2009 and 2010, it became a tactic, Federico said. “We lost the ability to hide [price increases] and to move guests around the menu. For us, innovation is one of the bigger tactics to again enjoy the value equation.”

Menu labeling, for which government hasn’t yet issued final rules, drew varied responses from the executives.

“I’m really scared of it,” said Liautaud of Champaign, Ill-based Jimmy John’s. “Man, it’s a bummer because it’s some chubby stuff. I think I’m taking all the prices off the menu so I won’t have to label it. The label has to be as big as price, so I’m thinking I’ll take the price off and just say, ‘Guess!’ Maybe I’m being arrogant.”

Federico of P.F. Chang’s added, “I think I’ll follow the model of our good friend George Biel of [Hillstone Restaurants and] Houston’s, and just change the name of the restaurants in order to get below the minimum requirement of I think 20 locations.

In markets where menu labeling is already required, Federico added, “We’ve not seen meaningful shifts in terms of what people are ordering and what they are not.” A number of Asian dishes have soy sauce, so Federico expects recipe engineering to take out sodium or sugar.

Bachelder said Atlanta-based Popeyes has done menu labeling in two states already, and the impact has been short-term, generally less than 30 days. “I’m not a fan of it,” she said. “The customer quickly treats it as wallpaper. It doesn’t give them particularly any more information in making decisions that they can’t get some other way. It doesn’t have a big impact on the business. It just makes your menu miserable to look at.”

She said digital menus with beautiful food shots might be an area for innovation in quick-service restaurants.

Sheetz said he plans to employ touch-screen ordering, already in use at units, to digitize menu labeling. He said the company had taken out “a lot of salt” during the research and development process.

“For full-service, there’s kind of a threshold where people raise an eyebrow. I think that number is about 600 calories.” Cooper said the chain has tweaked some sauces and has at least 60-plus items under 600 calories.

Tattersfield of Minneapolis-based Caribou Coffee said that although the chain has some espresso-based items that can be highly caloric, “a lot of the things we focused on when we relaunched food were things like turkey bacon and chicken-apple sausage.”

“This noise has been going on for a few years,” he added, so brands should be prepared. “Innovation has to be about whether you can have amazing, great products with the taste profile you want to have.”