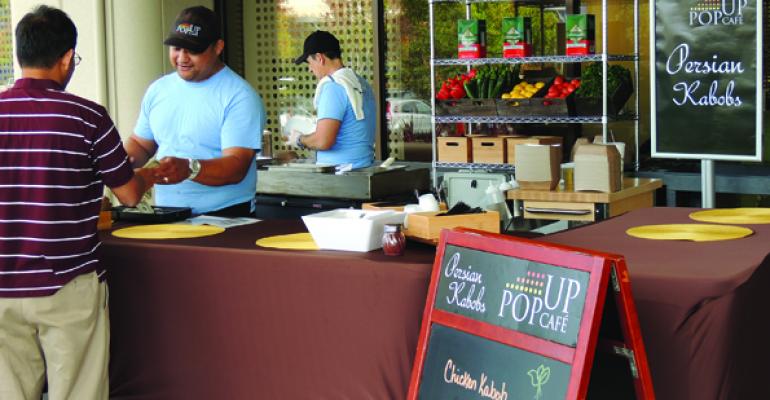 Something creative is popping up at several West Coast corporate locations where CulinArt, Inc., manages dining services. Employees there are discovering temporary (as in one-day) food stands set up in outdoor locations—usually near some open-air seating—on days when the weather is especially nice.

“Some locations were having trouble keeping up with participation levels, so we developed the popups to take some of the pressure off,” says CulinArt  Director of Culinary Development Roger Beaulieu. “It takes a food truck approach to developing an appealing menu you can serve with limited equipment—flat-top griddles or charbroilers set up in tents.”

The popups typically offer one menu theme at a time with several choices. Barrels filled with ice contain packaged beverages while a mobile POS takes credit and declining balance cards. The promotional materials are also inspired by the food truck culture’s cutting edge stylings.
“It’s typically a mid-week thing when the weather is nice,” Beaulieu offers. “There’s no set schedule. We send out an e-mail about where and when when one is planned.”

The concept debuted this past May at a Bay Area corporate campus. The popups operate only for a few hours over the heart of the lunch period. Advance prep is done in a permanent kitchen. For that reason, the popups are usually set up near a café with a kitchen from which they can easily be replenished and, preferably, one that also has outdoor seating.

Beaulieu says CulinArt plans to extend the concept to some of its East Coast sites next summer.