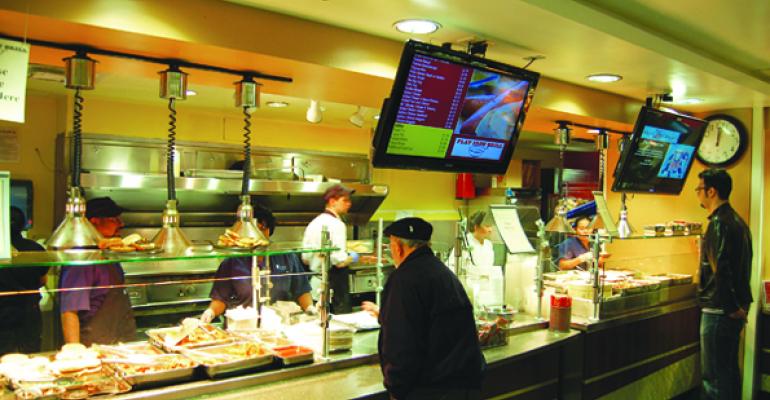 At UNC Health Care in Chapel Hill, NC, most patients can order room service meals all day from what amounts to a multi-station food court sporting over a dozen branded concepts. And they can mix and match selections from different stations to their heart’s (and of course doctor’s) content!

The facility’s Restaurant Delivery menu, given to every patient upon admission, is divided into 16 sections. Each represents a different, fully developed station concept (including beverages and a kid’s menu) with its own cuisine specialty. These range from Mexican and Asian to burgers and barbecue. There’s even a sushi concept and an ice cream “shop” that makes real milkshakes.

These same concepts (except the kids menu) also appear as brick-and-mortar branded retail stations serving staff and visitors in various locations around the multi-building complex. In other words, there is no difference between the retail and standard patient dining menus. 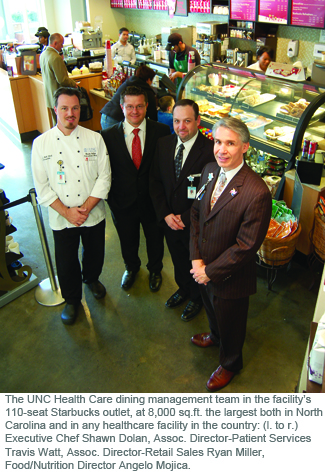 Integrating the two menus in such a comprehensive way gives the dining operation significant production and procurement efficiencies that help it manage food and labor costs while providing a high-impact, high-quality foodservice to everyone. Since the introduction of Restaurant Delivery last spring, patient satisfaction scores about the food have shot up from the 82nd to to the 99th percentile.

Restaurant Delivery actually came about almost as an accident, a kind of Plan B developed only after Angelo Mojica, director of food & nutrition services, realized that his original plan for patient dining—a fairly standard room service program—was a no-go because of labor cost concerns. Forced to come up with an alternative, Mojica and the UNC Health Care dining team developed Restaurant Delivery.

“The food in our retail operations was so good, we asked ourselves, ‘Why not feed it to patients, too?’” Mojica says.

Of course, that was just the first step. For a massive healthcare complex encompassing five hospitals and over 800 beds, preparing and delivering room service meals from the existing retail stations to the patient floors was effectively unworkable. “We didn’t want to inconvenience our retail customers,” Mojica says.

That would have been unavoidable if retail stations had to fill patient room service orders while also dealing with their usual lunch or dinner rush. Plus, if patients mixed dishes from the different stations, the logistics would have been almost impossible.

So the team came up with a hybrid approach that assigns patient meal production to a central kitchen where much of the prep for the retail venues is also accomplished since both operations menu the same dishes. That saves labor and streamlines product usage and purchasing.

The patient meals are prepared and assembled in this space, then sent to the patient floors in a strict 45-minute time window from the time the order comes in. It is an incredibly intricate operation given the sheer number of dishes on the menu, plus the amount of customer choice built into many of the concepts. 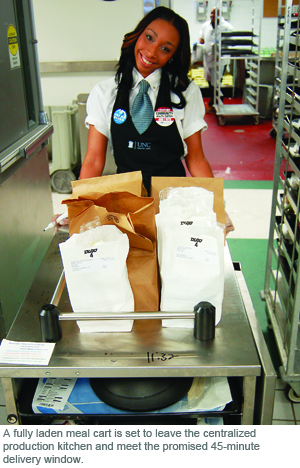 “Restaurant Delivery allows us to offer a massive amount of variety,” Mojica enthuses. “When we adopted it, our patient menu went from six to 20 pages!”

No kidding! A quick glance through the menu shows about six dozen set entrees among the different concepts, and that doesn’t begin to include all the design-your-own combos from the deli, burrito, pizza and salad menus. Or all the side dishes.

Most patients get hit with the full 20 pages and its sheer volume, commercial flair and flashy graphics (all food shots were custom photographed and show the actual dishes and presentations). The buzz has been considerable, Mojica says, with patients talking to each other and to their vistors about all the choices they have.

“It’s a great public relations tool for us and for the hospital,” he notes. Pricier selections like sushi that most people don’t order were added to make an impression. “It sends the message that this is not a typical hospital menu,” Mojica says.

Patients on regular diets can order what they want whenever they want during the 12-hour (7 a.m. to 7 p.m.) serving period. Those with diet restrictions are guided by call center associates when they order, and the menu includes many choices with “heart” icons indicating items low in fat and sodium.

The only deviations from the standard menu are a special edition with no pictures of the food, designed especially for cancer patients (who can sometimes get nauseous from simply seeing pictures of certain foods) and a special heart healthy menu for patients on strict limited diets. The kids menu is included in the standard menu, though, just like at a typical family restaurant, but young patients are free to order from the rest of the menu as well.

By using the same recipes in both retail and patient dining, UNC Health Care is also able to consolidate food production. While the retail stations still make to-order dishes in front of customers, bulk prep is centralized.

Even the large number of menu choices is becoming less of a challenge over time as data on consumption patterns accumulates—one advantage of a fairly set menu. “We’ve gotten pretty good at anticipating how much we’ll need of each dish, and as our staff gets more and more experience, we get ever more efficient,” Mojica says. “At the beginning it was a real scramble.” 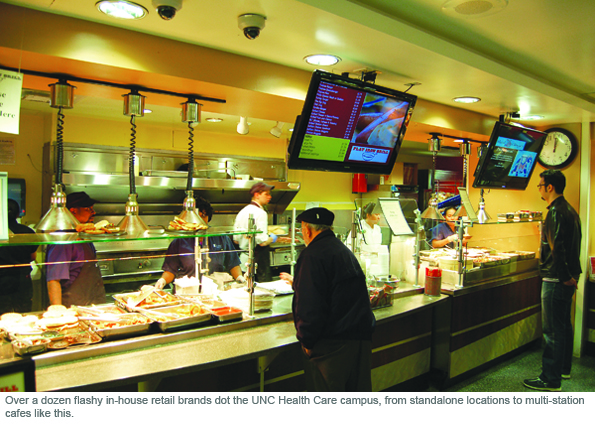 Overproduction becomes less of a problem because “we can use up any excess in the retail side,” Mojica notes. Food costs are actually down about seven percent since the program’s launch, thanks to both the production efficiency and the consolidation of purchasing to items that are used on both sides of the operation.

The 45-minute delivery goal is scrupulously tracked through bar codes affixed to each tray. They are scanned at different points in the cycle—when they’re plated, when they leave the kitchen and when they arrive at bedside so “if someone asks, we can immediately tell where in the process each tray is,” Mojica says.

He’s not done tinkering either. Mojica says he wants to start pickup and delivery services for staff to facilitate convenience, as well as expand patient dining to round-the-clock availability, though with a more limited menu in the off hours.

Restaurant Delivery After Dark will be operated with existing labor from a current retail venue that is open 24 hours.  Late night meal service for staff will be be run out of the hospital’s Starbucks outlet, which opened several years ago and now generates about 2,000 transactions and some $7,000 in sales on an average weekday.