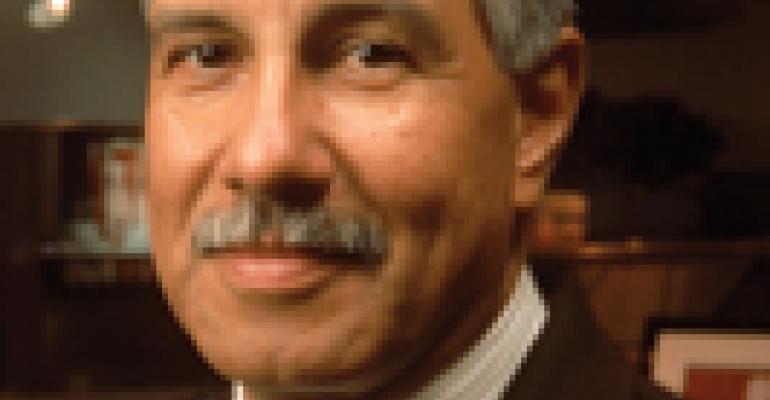 Richard Ysmael, longtime head of Food Works, the in-house dining operation at Motorola, Inc., passed away October 14th after a long battle with lymphoma. Winner of the Silver Plate Award in 1982 in the Corporate Dining category, Ysmael was a highly respected and influential figure in the onsite foodservice industry.

Food Works for many years was regarded as the largest self-operated B&I in the country and a major innovator in the segment. A mentor and friend to countless operators and executives in the business dining segment, Ysmael was a founding member of the Society for Foodservice Management (SFM) and a member of its first board of directors. He was honored many times over the years by SFM and other foodservice organizations.

In 2001, SFM launched the Richard Ysmael Distinguished Service Award, given annually to an individual in recognition of his/her exceptional service to SFM and the onsite foodservice industry. Ysmael himself was the first recipient.

FM asked several of Ysmael's long-time colleagues to offer memories of him for this page.*

“Richard Ysmael was the consummate leader and innovator in Business Dining for the past 35 years. He had the vision to take the foodservice program at Motorola from a “tray line” style of service to individual stations featuring fresh food cooked to order throughout the café. He implemented cashless payment, networked POS systems and external catering well before these initiatives were common in our business and has been recognized with every major award in our industry.

“He successfully transitioned the largest self-operated foodservice program in the US to Compass Group, retaining all the staff and adding the benefits of a global foodservice organization to the Food Works team.

“Richard was my mentor, my friend, my hero. He will never be forgotten.”
— Greg Schroth

“Richard was a gentle giant and his legacy is woven throughout foodservice. His rich contributions are seen in hundreds of the industry's successful leaders and in thousands of young people who benefitted from the leadership and wisdom he passed on to others.

“Good' was never in Richard's vocabulary. Your own “personal best' was always the standard. More importantly, he held himself to that standard and shared his enthusiasm with all who met him.

“The way Richard lived his life made me and many others reach for something more. He never accept the obvious, but always asked, “What if … you tried this… what if you looked at it this way…what if you considered…. He always saw beyond the expected and the accepted.”
— Debi Benedetti

“Richard was a good man, a gentleman, a calm man, a hero and a mentor to many of us. Above that, Richard was a visionary. He hired women and people of color when it wasn't a Human Resources necessity to do so. He did it because it was the right thing to do, because it strengthened his organization. He always sought out and valued differing opinions and I will miss his counsel.”
— Laura Lozano

“Richard's constant vision of the future and his high level of integrity were his greatest assets. It was always an honor to work with him. He will be deeply missed.”
— Carol Bracken Tilley

“I worked for Richard from 1978 to 1986 and was part of the team that developed Food Works. He and I became good friends and were always in touch after that, even many years after I left Motorola.

“He was always reaching out to others without regard for his own situation. In May of 2007 my wife and I were on a long trip and had stopped in Las Vegas. We were about to move on to Salt Lake City, but just before we were to leave, my wife fell very ill and was taken by ambulance to a hospital with a collapsed lung. She was very weak and was being fed intravenously and needed surgery.

“My wife and I knew that she might never leave Las Vegas alive. Richard called me and then came out to provide moral support. Despite his own illness, he displayed a remarkable, positive spirit and helped me move into an apartment.

Richard had been through so much and been close to death so often. Still, he was there to help me live with the pain in that period. He never felt sorry for himself.”
— Frank Burrows

“Richard was my Hero, My Colleague, My Confidant, My good friend, and the gentleman of the entire foodservice industry. He always had a good thing to say about everyone!”
— Rick Post

“In many ways Richard's passing marks the end of an era. He was the Joe Baum of our side of the industry and was one of the very early pioneers to focus intently on the goal of de-institutionalizing onsite foodservice.

“Richard was very influential over the years, but in a quiet way; the first to do many of the things that brasher individuals in the industry would later point to and write about. He never blew his own horn, but was always the first to call or send a note when another one of us would achieve some recognition or honor.”
— Neil Reyer

“Back in the early 1970s, it was Richard who approached me about managing NICMA (one of two predecessor organizations that merged to form SFM). Later, when SFM was formed, he became its third president.

“Richard always had a calm hand on the tiller. When issues came up between different members of the board or the membership, he was a wonderful abitrator. When he spoke, people listened. When he wanted things done, they got done. He was the voice and conscience of SFM.”
— Phillip Cooke

*Richard asked that those wishing to honor his memory should do so by making a contribution to lymphoma research in the name of Richard's Rangers. You can do that at www.lymphomathon.org/arizona2008. You can find “Richard's Rangers” under “Team Rankings.”