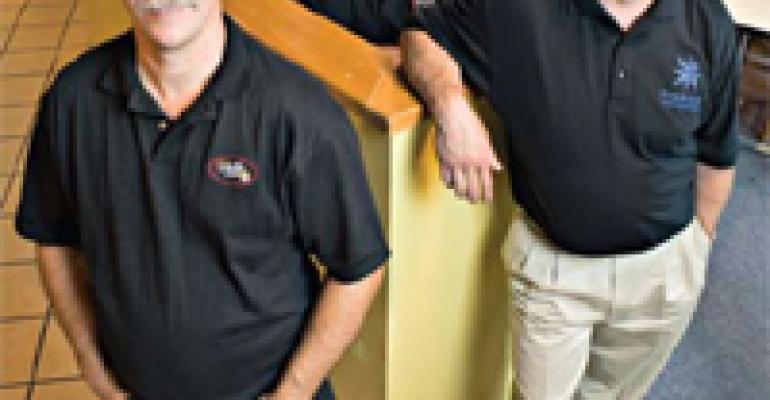 Management firm does more than provide foodservice&#8212;it also gives a leg up to those who need it.

A visit to the Mezza Café on the third floor of the Starbucks headquarters building in Seattle seems like any other meal stop in a B&I environment. The ring of food stations proffers a mix of sandwiches, salads, soups and entrees, and customers mill about, making their selections and checking out in the usual way.

But Mezza is different from most corporate dining sites in one important respect: the café is managed by a nonprofit firm called Pioneer Human Services, and the staff — including Café Manager Kevin Smith — are people working their way back from the margins of society, which can include anything from a stint behind bars to struggles with substance abuse and mental health issues.

“People deserve a chance to turn their lives around,” says Richard Pinney, vice president of food operations for Pioneer. “Our goal is to give them that chance.”

Pioneer is no fly-by-night do-gooder stab in the dark. The firm has been operating under the same philosophy since it was founded in 1963 by a man named Jack Dalton, who knew well the challenges his company confronts. A former attorney, he faced down his own demons (including prison time for embezzlement) and wanted to provide others with similar opportunities to make it back.

Hence, Pioneer provides its clients with a series of support services ranging from temporary housing to counseling and training on basic job skills. It also provides employment experience in various for-profit businesses it operates. At those jobs, they earn top wages for the industries in which they work, as well as full benefits, from medical/dental and vision care to paid vacations and even 100% tuition reimbursement.

Pioneer is a 501(c)3 nonprofit business, which means that it operates for-profit businesses, but those profits are used to fund its social service activities. Indeed, Pioneer foregoes traditional non-profit funding sources like grants and fundraising activities, and gets almost all of its funding from its own enterprises.

The company is audited by an outside accounting firm and monitored by seven different federal and state entities to ensure that it complies with its nonprofit enterprise designation, and that its operations meet industry standards in the businesses in which they operate.

Those businesses include a retail cafe unit that operates Mezza Café, as well as divisions in construction/maintenance, manufacturing, warehouse/distribution and food production/delivery businesses (see sidebar on p. 30).

The Mezza Cafe operations, as well as an adjoining commissary kitchen, are important because they provide those with no job skills entry level positions in which they can get some experience and learn “how to hold a job,” Pinney says. Of the some 11,000 clients Pioneer aids each year with its various social services, about a thousand also work in one of the company's business units. Most then graduate to jobs in the outside world.

The company's outplacement service works with outside employers to place clients. A recent study found that about three-quarters of those placed through Pioneer were still employed a year after leaving the company. That compares very favorably with the broad population of those on the margins who generally have great trouble holding onto jobs. Meanwhile, a University of Washington study found recidivism rates for those who had completed Pioneer's correctional and training programs was 6.4% after two years, compared to 22.3% for the state overall.

Pioneer's Mezza Café location in the iconic Starbucks headquarters building is rented from the specialty coffee firm, and most of the customers are Starbucks employees. Pioneer originally had its eye on the pre-existing cafe space in the building — originally a Sears regional headquarters and catalog distribution center — as a retail operation and a place where the company would be able to prepare food for its work release operations before Starbucks purchased it in 1997. Mezza has been in operation at the location ever since, with the coffee giant making an initial start-up investment in the space (now paid back).

Mezza's six stations, including a franchised Taco Del Mar outlet, serve a fairly basic B&I menu to accommodate the skill level of the Pioneer clients who rotate through as employees. About half of Mezza's staff at any given time is composed of offenders on work release (Pioneer operates most of King County's work release programs), while the rest are ex-offenders and other Pioneer clients looking to build job resumés. Few have any job skills or much work experience.

That was driven home when an ambitious planned pan-Asian station's menu proved too complex for the workers to execute consistently. The three induction woks purchased for that station — at a cost of $15,000 — are now used at the pasta/panini station.

“We found that they are ideal for making pasta dishes,” says Smith, “and the menu there is much less complex than what we planned for the Asian station.”

The pasta menu gives customers the to-order choice of various noodles, sauces and proteins, which are then sautéed together in the woks.

Mezza operates a satellite called Pronto on the Starbucks building's eighth floor, among the company's general offices. There, the menu is primarily grab-and go sandwiches, salads, soups and microwaveable entrees prepared in the main café below, plus breakfast pastries and bagels in the morning.

“We have found that the foodservice operations in Pioneer are a very good marketing point to introducing people to the Pioneer company,” Pinney says. “It lets prospective partners interact with our clients in a really positive way.”

Behind the Mezza servery is a central kitchen operation that not only prepares food for Mezza and Pronto but for Central Food Services, another Pioneer division that supplies meals to outside clients.

“Central fits our re-entry scheme very well because a lot of the offenders and ex-offenders had worked in the foodservice operation of the penal system,”Pinney says. “So this is a natural for folks like that.”

Central generates a profit, realizing sales of around $239,000 a month, producing some 3,000 meals a day for both Pioneer's internal clients (drug rehab centers, work releases, etc.) and external customers like King County Senior Services, which buys some 1,100 heat-and-serve lunches each day. The food is blast-chilled and distributed by Pioneer in four refrigerated vehicles to 28 different senior centers.

“We competed with for-profit companies to win this contract,” Pinney emphasizes. “We are expected to perform just like any other service provider in the private sector, and we do.”

The other Mezza Cafe in Bellvue is more of a street restaurant/coffee bar located in the city's Skylight Tower, an office building with some 1,500 employees. Pioneer would like to open more Mezza locations, but it is very careful not to overextend, Pinney says.

“Once we establish a service in an area, we try to put all the ‘legs of the stool’ there by providing the housing, the treatment and the employment opportunities,” explains Communications Director LorieAnn Larson. She notes that the company recently opened two buildings for housing in Spokane Count to support its treatment and work release programs there, “and we're now looking to bring in an enterprise so that there is an employment opportunity for those individuals and a way to support those programs.”