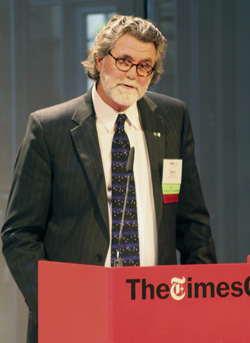 SFM President Mark Freeman announced the change at the close of the group's Critical Issues Conference in New York City on April 26, at the New York Times Center. SFM sent the news out to the full membership concurrently with a release explaining the reasons for the change.

"A lot of thought has gone into this brand enhancement," said SFM President Mark Freeman in a letter to the membership announcing the change. "We've known for years that industry responsibilities have been shifting. And we felt this was the critical moment when we needed to shift with it."

SFM will continue to operate under its current name and logo until October 1, when it will officially unveil its new logo at its 2013 national conference in Bonita Springs, FL.

"We want to keep our brand fresh, relevant and responsive for current members, new members and the industry at large," Freeman said.

"We want to expand into new markets and members segments, to build on the talent and energy our members bring to the industry. And we want to assure that SFM's current position as the primary resource for foodservice expertise in the B&I industry is augmented and never compromised."