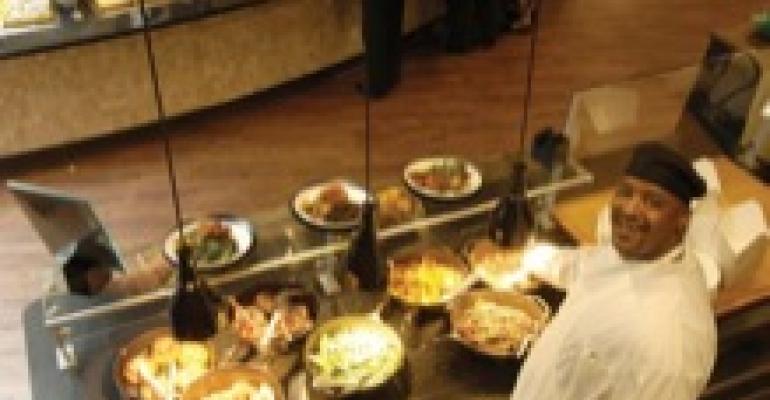 From zero to hero

While many onsite dining departments in the B&I segment struggle to justify their existence in the face of corporate bottom-liners, Humana, Inc., is going in the other direction at its expanding downtown Louisville (KY) headquarters complex.

The giant healthcare insurer recently completed the initial phases of a series of major renovations to historic buildings it had purchased adjacent to its existing headquarters tower. Among key additions in the new space: a whole floor (spread over several interconnected buildings) dedicated to a striking new company cafe and dining space—the first onsite foodservice ever offered at Humana's headquarters—plus a whole other floor (the basement) dedicated to a kitchen and foodservice storage.

It is very significant real estate commitment by the standards of today's B&I environment, but the spacious new digs, as well as the gourmet-quality food from foodservice provider Guckenheimer, Inc., are testament to onsite dining's elevated new status at Humana.

So, what gives? Why is a company that previously didn't even have onsite dining at its headquarters suddenly doing a 180 on the subject?

Humana wanted a "bug light" that could attract associates from all its different departments into one place on a regular basis, says Patty Guist, director of associate programs & services.

"Mike McAllister, our CEO, decided that we should have some place in which we could change the culture and encourage more employee interaction," Guist explains. "After plenty of discussion, everyone concluded that the natural bug light had to be food."

That conclusion had to hearten Guist, who has made a career out of advocating for quality onsite foodservice. Over her tenure with Humana and its predecessor companies—she started with Wisconsin Employers Insurance in Green Bay, WI, which became a part of Humana through a series of mergers in the 1990s—Guist has engineered a number of creative dining solutions in the face of limited space and resources over the years (for example her "C-Store Solution" at another Louisville site, profiled in the October 2002 FM).

Now, with the "bug light" decision, she saw her opportunity to design a full-scale onsite foodservice operation from the ground up for really the first time.

Upstairs/Downstairs
Of course, an organizational wish for onsite foodservice—even if it comes from the CEO—doesn't automatically translate into square footage and capital dollars. In fact, Humana's headquarters tower was already busting out at the seams, so finding cafe space was problematic, to say the least. And Humana Tower's layout isn't particularly suited to building the kind of social community McAllister envisioned.

"That building was not designed to bring a lot of people together," Guist opines, "so his vision was to use these other buildings to make that happen."

These "other buildings"—the adjacent historic structures the company had bought up before and during 2005—did have space, though not an unlimited amount, especially for a fast-growing concern like Humana. So Guist had to fight for it.

"We had hired a consultant to help us decide how to use those buildings to create a more collaborative environment," she says. "At first they talked about having a Panera Bread type of operation down in one corner of the basement. I told them that that was not going to work. You can't get 2,000 people through there and get the kind of interaction they wanted."

Apparently, her argument made an impression, because the next offer upped the ante considerably—in fact, it was for the entire second floor of a series of adjoining buildings (the buildings were all recently interconnected by second-floor passageways, an engineering feat in itself given that the floors of the different structures are not all on the same horizontal plane).

"They said, ‘Okay, you can have the second floor—what are you going to do with it?'" Guist recalls. "So I had to put together a proposal pretty quickly."

She worked with foodservice consultant Robert Rippe & Associates to come up with a design that would justify the space commitment and accomplish the corporate mission of encouraging interaction. Pretty soon, one snag became obvious: even though it looked like there was a lot of room in the assigned space, the kitchen took up an awful lot of it.

"The kitchen really cramped the seating," Guist explains, "yet the whole reason for doing this was the seating. The idea was to provide a relaxing space for employees to recharge and network. So our problem was, how do you lay out a cafe with an adequate-sized kitchen that would handle the numbers and still have the space to give customers the kind of relaxing communal experience management wanted them to have?"

The design team tried a variety of approaches, but the problem remained. To get the kind of quality and variety of food Guist intended for the large numbers that would be coming through, Guckenheimer (which was brought in around this time) needed a certain amount of production space, and the space had to come from somewhere.

That's when Guist made an important discovery: "I found out that no one was going to use the basement in one of the new buildings," she says.

Her three-word reaction: "I'll take it!" That basement space—some 3,300 sq.ft.—now holds a battery of production equipment, including two combi ovens, a charbroiler, a 60-gallon steam kettle as well as 6- and 12-gallon steam kettles, a blast chiller, a convection oven and a four-burner cooktop. In addition, Guist has expanded her underground empire into a couple other building basements. One holds the condensers for the refrigeration equipment while another has locker rooms and offices for the manager, catering, chef and bookkeeper as well as a small room for cash counting.

Meanwhile, upstairs, the squeeze was now relieved, allowing for the design of the spacious, eye-catching servery and expansive seating areas she had envisioned. With over 5,000 square feet of servery space to play with (divided between two adjacent buildings), the final design for what eventually became the Winner's Circle Cafe sparkled with clean lines, spacious aisles, large serving areas and long-term flexibility that allows it to be adapted to different kinds of food programs.

The arrangement efficiently funnels traffic to the various stations located along the perimeter of the central serving island, which is bisected by the wall separating the two buildings. Archways cut into that wall on either side of the island allow customers and staffers to pass back and forth easily.

On one side, the island features grill and pizza/quesadilla stations while its flip side offers soup, salad and saute stations where dishes are made to order. Meanwhile, a deli sits right at the entrance to the servery to pick off a portion of the entering customers and ease the traffic at the other stations. Through the archway next to the deli, customers can find another self-contained service counter, the Market Bistro entree station. A display area with pre-plated desserts made fresh in the basement production area sits opposite the salad/saute side of the central island, near the checkout lanes (for more on the cafe layout, see the diagram and sidebar on p. 52).

Preprep is effected in the basement kitchen area and the food is brought up on a newlyinstalled elevator (Guist says she slyly slipped the elevator request in after she landed the basement kitchen, and chuckles at how that elevator subsequently became quite popular with the construction crews renovating the buildings). The one piece of necessary redundancy is that there are dishrooms on both the serving and production floors, "because we can't be hauling dirty dishes from one floor to another," says Guist.

Intimate dining for 366
Radiating out from the servery and spread over five separate buildings are the seating areas. This, as Guist noted, is the core of the cafe's mission: the 366 seats (including booths, various table/seat configurations, bar stool window seats, etc.) are scattered across a series of small, semi-isolated dining spaces tucked into the various corners of the historic buildings. These quiet nooks facilitate conversation and interaction more readily than one vast impersonal cafeteria seating area (impossible anyway, given the architecture of the buildings) might. In effect, Humana has found a way to make the dining experience more intimate for hundreds of diners eating at the same time.

And it seems to be working. "You get people pushing tables together, you have teams getting together for lunch and you have people really enjoying the dining area as a social space," Guist says. "This is not about feeding employees, it is to encourage collaboration while also having a high-quality foodservice.

"I've always felt that foodservice was the one place where an employee can experience a company's culture most clearly. I feel this cafe is a reflection of our culture here at Humana, because it offers choice, information to make good choices, it's innovative and interactive and it promotes health and wellness."

The quality of the food is not an incidental part of the formula. High-quality food not only provides a communal sensory experience that facilitates the good feelings necessary for the collaborative environment the company wants, but it also fights the notion that the cafe is merely a "fueling station" where one makes a quick midday stop, rather than a place to linger and mingle. Of course, it also sends the message that the company cares about its employees enough to give them a high-quality onsite dining service.

"Food quality is especially important in Louisville, where people have such high expectations," Guist says, noting that the city is a culinary hotbed with strong local food traditions and a vibrant independent restaurant scene, where citizens tend to be sophisticated, opinionated diners. To make it here, you better be ready to demonstrate your foodie bona fides, she says.

Compounding the challenge for any inhouse foodservice provider is the volume and variety of the external competition. There is a very good reason why Humana Tower did not have onsite foodservice until now: within a few minutes walk of the building, lunchtime consumers can find not only national QSR chains like McDonald's, Arby's, Wendy's and Subway and casual dining outlets like TGI Friday's and Hard Rock Cafe, but also dozens of independents with strong local reputations and loyal customers. To top it all off, Louisville's famed "Fourth Street Live" entertainment and dining district is only about a five minute walk away.

Put in that context, the average daily participation rate in the early going (the cafe opened in April) is particularly impressive. With a building population of around 2,000, the Winners Circle cafe draws over

900 customers on an average day (plus another 300 at the self-contained Starting Gate coffee shop (see sidebar below). Some of the traffic is from other nearby Humana offices, which have another thousand onsite employees (and for whom Guist is looking to get their own onsite foodservice down the line). In all, Humana has some 8,000 employees in downtown Louisville, though about 5,000 are in buildings too remote for practical access to the Winners Circle on a daily basis.

To this environment Guckenheimer has brought not only a focus on fresh, appealing food in a multitude of ethnic and regional guises, but a tutorial mission.

The company has put a focus on susatainable and organic ingredients and is also working with Humana to encourage some changes in employees' eating habits. An extensive sampling program is designed to get diners to taste different dishes, especially those that have a more healthful profile, such as vegetarian offerings.

There is already a core of vegetarian diners in the population because of a significant number of ethnic Indians who follow traditional Hindu teachings about avoiding meat.

Guist and Guckenheimer General Manager Jason Sull want to nudge others that way as well—not to give up meat entirely, of course, but to try meatless dishes or those with a smaller meat component (for more on the menu, see the sidebar on p. 56).

"So not only have we gotten people to collaborate more, but we're getting them to eat different, healthier things," quips Guist. "This is not so much a cafeteria as it is a reflection of what we want our company culture to be."