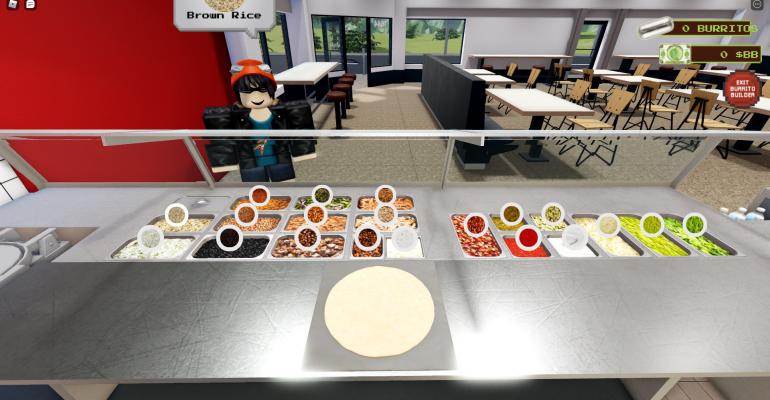 Chipotle Mexican Grill
A screenshot of what the game will look like in Roblox.
News & Trends>Business & Industry

This and a report predicting significant growth in the global drone delivery market are some of the tech-related developments you may have missed recently.

Chipotle Mexican Grill has announced its entry into the metaverse with a new limited time game on the Roblox platform that will let customers use their virtual burrito-building skills to earn coupons for free Chipotle food in real life. The virtual reality experience will challenge players to roll burritos via a ‘90s-themed Chipotle simulation (in a nod to the restaurant’s heritage) to earn Burrito Bucks (Chipotle meal credits) starting on April 7, with the first 100,000 players to successfully roll a burrito able to earn a free entrée, while the top five players on the leader board every day from April 7 through April 13 will receive free burritos for a year.

In separate news, Chipotle also announced that it will be testing out RFID (radio frequency identification) tags at its Chicago distribution center and at 200 Chicago stores to improve the traceability of its inventory systems. With the tags, Chipotle will be able to track ingredients all along the supply chain, so if there is a food safety issue, it can be more easily traced.

The global Drone Delivery Service Market will be worth $9.51 billion by 2027, according to a current analysis by Emergen Research (click here for a free sample PDF). The growing usage of drones across commercial applications like food delivery and medical aids delivery is one of the key factors projected to fuel the growth, the report notes, while in the U.S., various exemptions approved by the Federal Aviation Administration to allow and commercialize the utilization of drones across several industries are also driving the growth of the drone logistics and drone transportation market.

The City of Charlotte has announced a partnership with technology vendor Tiny Mile to test a robotic coffee delivery service in its Plaza Midwood neighborhood, representing Toronto-based Tiny Mile's first foray into the U.S. market after successful operation in Canada. The two-month pilot program seeks to reduce traffic and carbon emissions by using small, heart-eyed pink robots to deliver coffee and food from local cafe Undercurrent Coffee to residents within a one-mile radius.

Read more: City of Charlotte and Tiny Mile to Test Robots for Coffee Delivery to Reduce Traffic and Carbon Emissions

Coffee chain Tim Hortons has launched a pilot automated drive-thru project at its location in Tecumseh, a Canadian town east of Windsor across Lake St. Clair from Detroit. The location uses a conveyor belt system in a second lane alongside the traditional drive-thru that sends an automated receiving box with electric doors that the guest receives after paying. A company spokesperson said the goal wasn't labor saving—in fact, the unit had to hire additional staff to monitor and run the system—so much as speeding up customer service.