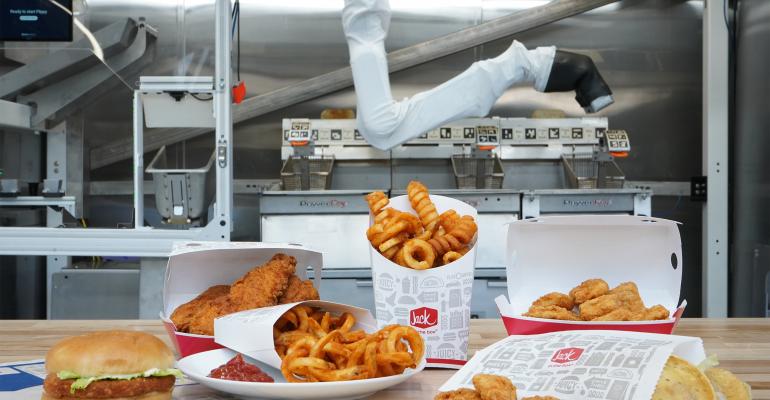 5 tech things: Jack in the Box latest to test robots in the kitchen

This and robot delivery adding campus dining jobs at Oregon State are some of the tech-related developments you may have missed recently.

Add Jack in the Box to the list of fast food chains experimenting with robots, joining the likes of Chipotle, Panera and White Castle in using Miso Robotics technology for food production. The company is launching a pilot program that will test Miso's Flippy 2 (frying) and Sippy (drink-prepping) robots in a San Diego restaurant to see how much they can free staff to spend more time with customers and less time in the kitchen.

Read more: Jack in the Box will experiment with burger-flipping robots

The 80 Starship food delivery robots in full service on the Oregon State University campus have increased the number of jobs at most on-campus restaurants as it's actually a full-time position to place food orders in the machine and send them off, says Kerry Paterson, director of Campus Dining & Catering. "We employ more people because we have what's called Robot Runners now,” he explains. “Their job is to run around and pick up the orders and send them on their way."

Applebee’s franchisee Doherty Enterprises has announced that its restaurant in East Islip, Long Island now features a new pickup locker system that enables quick, contactless food order handoff to popular delivery service providers such as Uber Eats, DoorDash and Grubhub, reportedly making it the first casual dining restaurant in the United States to make use of the automated units. At the location, once an order is ready, it is loaded into the back of the OrderHQ smart locker straight from the kitchen, and delivery drivers enter their unique code to unlock their specific pickup orders, with the entire process lasting less than 10 seconds.

Minneapolis is the next major city to test the use of food delivery robots when Skippy units roll out in May using a combination of artificial intelligence, machine learning and a "metaverse" workforce of operators called ‘Skipsters’ who supervise and train them through a virtual reality interface. Skippy will initially be making deliveries in partnership with Fletcher’s Ice Cream and SiP Coffeebar, with plans to add more in the works.