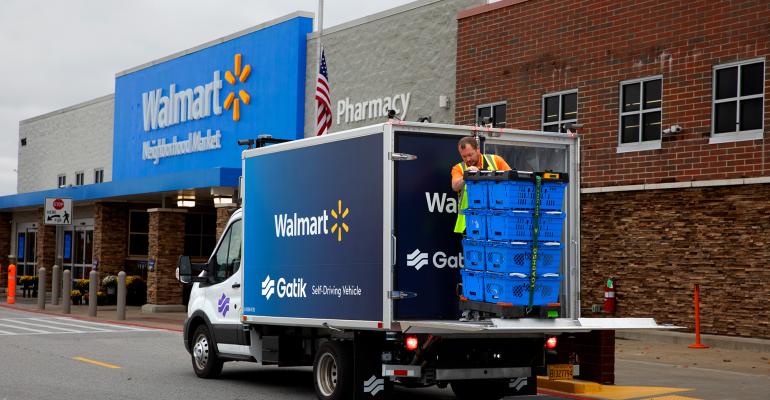 Walmart/Gatik
Walmart is piloting daily delivery without a safety driver behind the wheel of a delivery route in its headquarters city of Bentonville in Arkansas, moving customer orders between a Walmart dark store and a Neighborhood Market in its fleet of multi-temperature autonomous box trucks.
News & Trends>Business & Industry

This and Uber Eats gearing up to provide robotic delivery in Los Angeles are some of the tech-related developments you may have missed recently.

Autonomous sidewalk delivery company Serve Robotics has announced a partnership with food delivery and ride-sharing platform Uber Technologies, Inc. to bring on-demand robotic delivery service to Uber Eats customers starting in Los Angeles early next year. "Serve Robotics is looking forward to delivering great convenience for Uber Eats merchants and customers," said Serve Robotics Co-founder/CEO Dr. Ali Kashani. "Uber is our first commercial partner and will be a strong source of demand for us as we use contactless delivery to power community commerce at scale."

Teaming up with logistics and delivery tech firm Gatik, Walmart is piloting daily delivery without a safety driver behind the wheel of a delivery route in its headquarters city of Bentonville in Arkansas, moving customer orders between a Walmart dark store and a Neighborhood Market in its fleet of multi-temperature autonomous box trucks. Gatik’s deployment with Walmart in the state represents the first time that an autonomous trucking company has removed the safety driver from a commercial delivery route on the middle mile anywhere in the world, according to Gatik.

Automated pizza kitchen (APK) vendor Basil Street has placed five of its units in some of the largest corporate settings in the United States, such as Northrop Grumman in Southern California and Texas-based Daikin, providing upgraded meal solutions that have generated an overall uptick in employee satisfaction and requests for additional APK units. They join existing APK units in colleges, major airports, drinking establishments, truck stops and other locations.

"We are leading a revolution, stepping-up the delivery of hot, delicious food options at traditional, unfulfilling vending machine locations through innovative automated pizza kitchen technology," said CEO Deglin Kenealy. Basil Street's kiosks feature three 10-inch Italian style, thin-crust pizza options—four-cheese, pepperoni, and a "Pizza of the Month"—made with the freshest ingredients and then flash-frozen before being cooked-to-order in about three minutes with a patented three-element non-microwave speed oven.

Sally, the fresh-food robot from vendor Chowbotics that custom-makes salads to order from ingredients in its 22 fresh-food compartments, recently debuted at two locations on the Carle Health central Urbana campus in Illinois—in the South Clinic coffee bar and in Carle Foundation Hospital’s lower level in a virtual kitchen pick-up area near the currently closed cafeteria. Since Carle’s cafeteria is undergoing an extensive renovation and isn’t set to reopen until the end of the year, Sally is providing a 24/7 healthy food option for visitors and staff and will likely remain after the cafeteria reopens, says Kevin Steffes, Carle’s food services director.

Grocer Greer’s Markets plans to offer customers drone delivery service via a technology development partnership with Deuce Drone Inc., which says that flights are slated to begin in November between the Greer’s Market store on St. Louis Street in Mobile, Ala. and business incubator Innovation Portal. Earlier, Deuce Drone had also secured an exclusive contract to deliver lunch at BB&T Financial Centre office complex in Mobile by drone from the nearby Legacy Village retail center.

Bonus: Sustainability remains a priority despite the pandemic