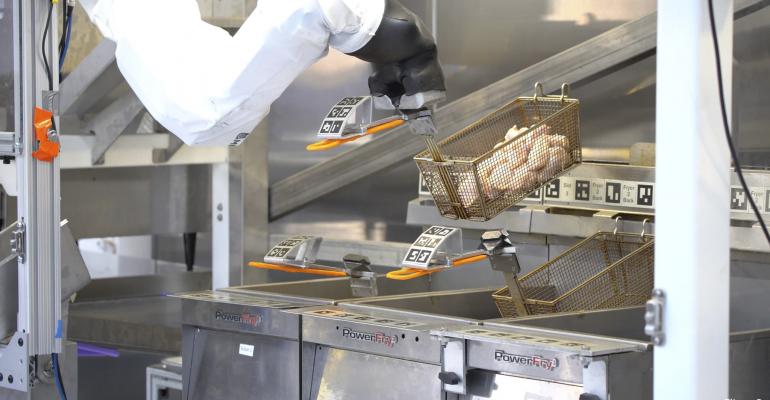 This and Walmart expanding drone delivery to six states are some of the tech-related developments you may have missed recently.

Fast casual chicken wing concept Wing Zone has announced a partnership with Miso Robotics to make Miso's Flippy 2 kitchen automation tool a part of the chain's standard build for all future restaurant locations, making it the first fast-casual brand in the world to spec food robotics into its operations at this level, according to Miso's announcement. The partnership comes in parallel with the recently announced Wing Zone Labs, a Wing Zone franchisee that will deploy Flippy at its 20 forthcoming Southern California locations to handle the frying station for chicken wings and other fried menu items.

Walmart this year plans to roll out DroneUp drone delivery for online orders to 34 sites in six states (Arizona, Arkansas, Florida, Texas, Utah and Virginia) by the end of 2022, enabling it to serve four million households via the service. Meanwhile, the company also announced its intention to automate all 42 of its regional distribution centers under an expanded partnership with artificial intelligence (AI) and robotics specialist Symbotic.

Automated solutions to the lack of wait staff, cooks and other line personnel was a major theme running through at the recent 2022 National Restaurant Association Show in Chicago, the NRA’s first in-person show in more than two years. Among products on display were a sushi rolling robot from AUTEC that is slated for release this summer, an indoor delivery robot designed specifically for restaurants and other hospitality settings from Segway Robotics, and advanced service robot solutions from Keenon Robotics that included a robot waiter that assists human waiters in serving and returning used dishes efficiently as a food runner, allowing human waiters to save time and focus on customer service.

Online shopping destination Smarty announced the results of a new consumer survey about Americans’ shopping preferences that found that nearly half (48%) say they would pay more money for drone delivery if it meant getting their products in an hour. When considering the types of goods they might obtain via one-hour drone delivery, food was the most cited, with 40%. Top worries included items being ruined by drone travel (51%), the drone breaking down so consumers won’t receive their items (58%), drone delivery to the wrong address (58%), the drone breaking down and consumers not getting a refund (54%), and the drone leaving items unattended, making it easier for porch bandits to steal packages (54%), as well as the lack of human interaction with delivery people (31%).

Read more: New Data from Smarty: Nearly Half of Consumers Would Pay for One-Hour Drone Delivery

Automated foodservice is expanding its sophistication and capabilities, with startups sprouting around the globe. In Europe, tech startup Remy Robotics is using AI-powered robots to cook a variety of foods and serve them in delivery-only restaurants. Currently operating five food brands out of its two existing locations in Barcelona and Paris—with a third to open in Barcelona soon—the company uses autonomous kitchens built around algorithmic cooking with M2M communication between proprietary smart ovens, fridges and robotic arms to cook food 40% faster than the average delivery restaurant, while the recipes are designed with robots in mind and based on dozens of different parameters such as the specific shape of its proprietary packaging, moisture lost during the cooking process, cooking during delivery and many other variables. That precision means, for example, that the robots decide autonomously how and for how long to cook a dish based on where a customer lives and how long the delivery will take, helping ensure maximum product integrity when received.