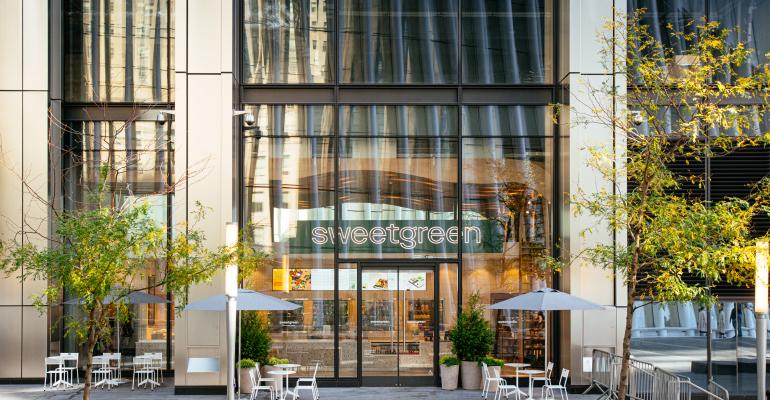 The airy, futuristic 2,360-square-foot space omits indoor seating and features a state-of-the-art pick-up station that can be move inside or outside and caters to the growing number of customers who prefer to order their meals online.
News & Trends>Business & Industry

This and a restaurant building business through high-tech vending outlets are some of the tech-related developments you may have missed recently.

Unlike most of casual salad chain Sweetgreen’s 121 locations nationwide, its newest location at the World Trade Center in New York City offers a glimpse of what lunchtime rush dining may evolve into at an outlet mainly serving employees of a major office complex during and after the pandemic. The airy, futuristic 2,360-square-foot space omits indoor seating and features a state-of-the-art pick-up station that can be move inside or outside and caters to the growing number of customers who prefer to order their meals online. “Our design team really focused on the engineering of the pick-up station because we knew we wanted our shelving to be mobile,” said Pamela Haber, head of real estate, east for Sweetgreen. “We are building our stores with the flexibility to transform throughout the day to provide our customers and team members a safe environment and keep them connected to real food.”

A team of 25 chefs, line cooks and production packers in the kitchen of the Icebox Café restaurant in Hallandale Beach, Fla. turn out fare such as Moroccan chicken bowls, chipotle turkey on fresh multigrain, cheesecake bites and tres leches cakes to stock a dozen touchscreen vending machines scattered across area locations such as the Alluvion Las Olas luxury residential tower, an Audi dealership and the University of Miami. Icebox Café Owner Robert Siegmann says the evolution to such a distributed serving model makes financial and marketing sense in the current environment, noting that restaurants "are suffering from labor issues, so this is a way to solve that dilemma. It’s a huge gamble right now to invest a million dollars in a full-service restaurant. Or you could spend $15,000 on a vending machine, get it branded and install it, and if doesn’t work, just unplug it and put it somewhere else.”

A trio of Stanford University engineers have teamed with Michelin-star chef Eric Minnich to launch a company called Mezli that is building fully autonomous modular restaurants, with a prototype already up and running in San Mateo that is serving Mediterranean-style grain bowls, side dishes and drinks that diners can order directly from the restaurant or online and either pick up or have it delivered. Once the company can scale, it will be able to mass produce thousands of the modular restaurants and deploy them in a fraction of the time and money it takes for traditional restaurants to get up and running, says Alex Kolchinski, one of the founders.

Compass Group USA and retail technology firm 365 Retail Markets LLC have agreed to pay $6.8 million to resolve a proposed class action alleging they without proper notice and consent captured biometric data from users who scanned their fingers to operate vending machine systems, according to filings in an Illinois federal court. Compass and 365 Retail Markets deny liability and wrongdoing, according to the settlement documents.

Cutting-edge concessions technology consisting of four autonomous Amazon Just Walk Out markets and 17 other themed markets tied to self-service kiosks recently made its debut at Climate Pledge Arena in Seattle, and sources indicate that the average per cap spend for the opener of the NHL expansion franchise the Seattle Kraken was "much higher" than the typical per cap of $25 for an NHL regular season game. For the first few events, which included a couple of concerts and Kraken games, sales at the Shaq’s Big Chicken and Lil’ Woody’s stations were about 25% higher than a regular concession stand of that size, due in part to greater speed of service and efficiency, while candy sales at the four Amazon markets were about double what concessionaire Delaware North generates at other arenas.

Read more: Tech Serves Up a Round of Higher Per Caps

Bonus: One On One With: High-tech fridges provide fresh, local fare 24/7 at Buffalo Niagara Medical Campus