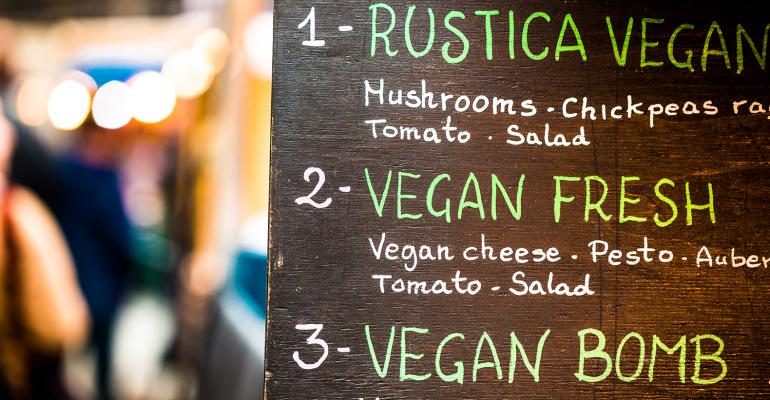 coldsnowstorm / iStock / Getty Images Plus
FM Top 50 firm ISS Guckenheimer has pledged to make 55% of its menu options plant-based by 2025, which it says is the strongest commitment to date from any food service management company.
News & Trends>Business & Industry

This and a Penn State campus c-store becoming eligible to accept SNAP benefits are some of the stories you may have missed recently.

Related: 5 things: USDA may free up $1B to help schools buy commodities

FM Top 50 firm ISS Guckenheimer has pledged to make 55% of its menu options plant-based by 2025, which it says is the strongest commitment to date from any food service management company. A signatory to the Cool Food Pledge that requires a minimum reduction in greenhouse gas emissions of 25% by 2030, the company plans to work with the Humane Society of the United States on recipe ideation, culinary trainings and greenhouse gas assessments, and initiate the global roll out of the PowerPlant concept and culinary toolkit developed by its chefs and recently piloted in the U.S. that focuses on utilizing more seasonal, regional vegetable and plant-based alternatives as a core element of menu writing, to reduce reliance on animal protein.

After a year of research and applications, Market East in Penn State University’s Findlay Commons has officially become a SNAP benefits retailer. To qualify, the venue had to meet either USDA's “Criterion A” (a staple food inventory) or “Criterion B” (staple food sales). Criterion A states, “A store must have three stocking units of three different varieties for each staple food category on a continuous basis. For two staple food categories, there must be at least one perishable variety.” Criterion B states that a retailer must have more than 50% of its gross sales come from the sale of staple food items.

San Francisco based tech firm LinkedIn, which has adopted a flexible work policy that lets employees work from home as often as they want, is also trying to draw workers back to the office through programs like Reconnect, a series of in-person and virtual events around monthly themes, and with traditional tech industry perks like free coffee bars, a corporate gym and a gourmet cafeteria. The company is also expanding to new areas, recently opening an office with around 50 workers in Atlanta, a rising tech hub with a fraction of the housing costs of major coastal cities, and redesigning its onboarding program for new hires, looking at more ways to bring people to the office if they want to.

Read more: LinkedIn hired 40% of its workforce during the pandemic. Here’s how it’s luring workers back to its S.F. office

Buffalo restaurateur Paul Tsouflidis is finalizing an agreement to open a Newbury Salads unit at LECOM Harborcenter and adding kiosks and “smart shelves and fridges” in a number of locations in and around Buffalo General Medical Center after a previous vendor, Healthy Scratch, closed locations at Harborcenter and a few of the hospitals in Buffalo's downtown medical corridor. The kiosks in the hospital setting will be managed through an app called Iris and feature signature items and grab-and-go food.

The NFL's Cleveland Browns recently arranged a Rookie Cooking Class hosted by chefs from Baldwin Wallace University Dining Services to teach first-year players how to better fuel their bodies as they step up to compete in the NFL. The basic culinary class, which featured a healthy menu full of lean protein and colorful veggies and a friendly culinary competition among the attending players, was held at BW's Center for Innovation and Growth, which is less than a mile from the Browns' training complex in the Cleveland suburb of Berea.