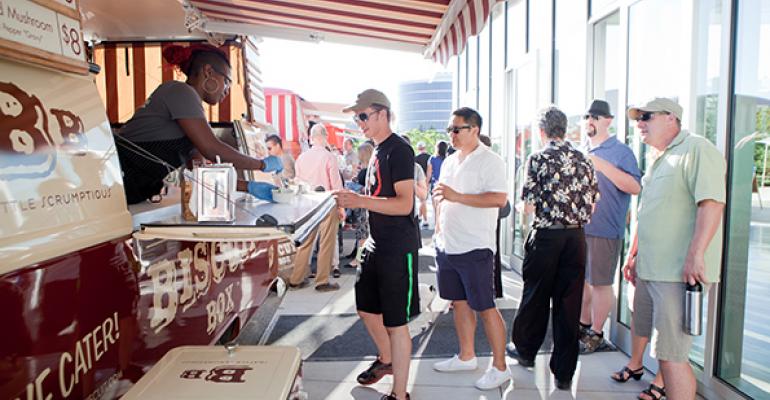 In 2014, Bon Appetit Management Co. debuted two Mobile Mavens mobile dining concepts, Biscuit Box and Pop Up, to supplement its fixed dining operations at a number of campus and corporate client sites in Seattle. That initial foray eventually evolved to an expanded approach and proved so successful that on June 30, the company rolled out three additional mobile concepts—Lil’ Blu + Half Pint, GaiBox and Picnic—to augment the fleet.

The Mobile Mavens mobile dining platforms are not “food trucks” in the traditional sense but compact-sized campers—and even a bike—that can serve locations not normally accessible to larger vehicles, says Laura Braley, specialty venue public relations manager for Bon Appetit. “They also take less labor to manage, have fewer parts to fix and if we need to store them away in a garage for a couple of cold, rainy months, it’s easy to do,” she adds.

Seattle was a natural venue for this extension of Bon Appetit’s operations because “we have such a unique relationship with so many of our corporate accounts there, and so many of them are in the downtown hub,” Braley explains. “So we decided to take them to the street instead of just having them in more private, less public locations. Plus, there was already such a great food truck scene in Seattle!”

The rolling restaurants also fit a variety of catering and party applications, either individually or grouped for a more extensive menu selection.

Each of the five carts has a distinct menu approach:

Lil’ Blu + Half Pint is one part (Lil’ Blue) vintage saloon on wheels made from a classic 1968 Volkswagen van featuring a flip-down counter, stools, karaoke machine and a frozen lemonade machine for making Dee’s Famous Soft Frozen Lemonade. The sidekick (Half Pint) is a mini trailer that houses a “kegerator” and six taps for nonalcoholic local sodas and nitro cold brews. The taps can easily be adapted to dispense beer and wine when serving at private parties and events.

GaiBox plays off the word “gai,” which is both Chinese for “chicken” and Japanese for “outside.” Together, they perfectly describe this chicken-and-rice concept, which was inspired by the regionally famous Nong’s Khao Man Gai restaurants in nearby Portland, Ore. GaiBox uses locally sourced Osprey Hill Farm chicken poached whole with herbs and spices, served atop rice cooked in the broth from the chicken poaching. The dishes are topped with a choice of three authentic sauces.

For a gallery of photos of the Mobile Mavens concepts, as well as some of their menu selections, go here >>