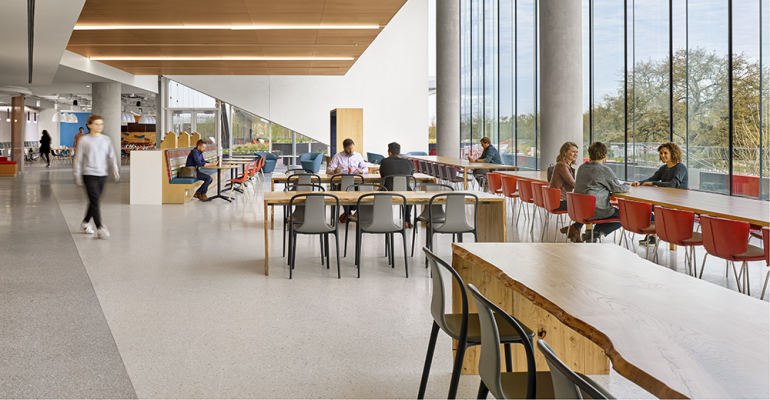 Oracle is attracting a massive number of young professionals to its new, 560,000 square-foot waterfront campus on the southeast side of downtown Austin—and it’s feeding them really good food.

The company is hoping that by offering an array of amenities—including access to affordable housing, a fitness center and a dynamic foodservice operation—it will be better able to compete with the growing number of companies tapping into Austin’s tech talent pool. The hope, according to O’Donnell, is that young professionals will be more inclined to work for the software giant as it shifts its focus to the cloud and builds hubs for those sales groups. “Amenities—like an on-campus Starbucks, outdoor terraces, “huddle rooms” and a “tech bar”—are important to the millennial workforce,” he adds.

With several thousand employees living and working on the college-like campus, and plans to double that in the coming year, menus must cater to a diverse set of tastes. Inside the café there are eight different station concepts including a taqueria, a grill, an India/Asian concept, a Southern station, a barbecue station, a deli, a comfort station and a breakfast station. The kitchens are completely open and feature “all the best toys,” says Executive Chef Drew Ison, including a tandoor oven.

“Our menus strive for authenticity and relevance,” says Ison, who has been with Oracle’s at its Austin campus for the past nine months. [The campus opened in January.] “We have the creative freedom to cook the foods our customers want. And we pay close attention the details and their feedback so that we can adjust accordingly.”

Barbecue has been super popular. Ditto for the grilled burger of the week and the breakfast tacos. The pastries, prepared by Oracle’s in-house pastry chef, are equally inventive and well-liked.

“The most important thing for me in a kitchen isn’t the shiny new equipment,” says Ison, who insists on his staff addressing him as “Drew,” not chef. “It’s the people. Without a strong team, we’re nothing.” Ison makes it a point to jump in and help as often as needed, even if that means washing dishes. “I like to lead by example,” he says.

This approach has helped him garner the utmost respect from his team. It has also nurtured an all-hands-on-deck attitude where collaboration is highly encouraged.

“We are constantly tweaking our dishes because we are constantly interacting with our customers to learn more about their preferences,” says Ison. “Healthy food is a big focus for us right now.”

In addition to creating more good-for-you-fare, Ison and his team are working on new pop-up concepts, grab-and-go options and vegetarian dishes.

“Our menus will continue to evolve because our customers’ taste will also evolve,” says Ison. “We will push the envelope and find exciting ways to drive participation.”