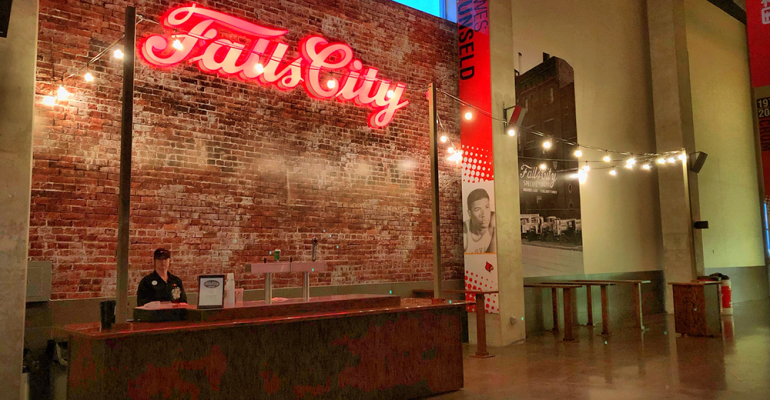 The KFC Yum Center is the major events indoor facility for the city of Louisville, including serving as the home arena for the University of Louisville Cardinals men’s and women’s basketball teams. In fact, with a seating capacity of over 22,000, it is one of the largest college basketball arenas in the country and larger than any NBA arena.

In addition to hosting basketball and other sporting events, Yum Center is a major concert venue that has hosted the likes of Taylor Swift, Beyoncé, Jimmy Buffett, Cher, Motley Crue, Katy Perry, Luke Bryan, Justin Timberlake, Lionel Richie and Maroon 5 since its opening nine years ago.

The arena’s concessions partner, Centerplate, recently upgraded the food and beverage options inside Yum Center with a couple of premium branded alcoholic beverage stations as well as with a rebranding of seven existing concessions stands to the premium Farmstead Chicken & Burgers and Haute Dog brands, along with menu overhauls.

The Jim Beam bar, outfitted to resemble the Jim Beam House in nearby Bardstown and menuing a wide selection of the noted distiller’s products, debuted in late November during a men’s basketball matchup between Louisville and Michigan State. It was followed later by the debut of a beer garden created by local firm Falls City Beer that is stocked with an assortment of the brewer’s products. 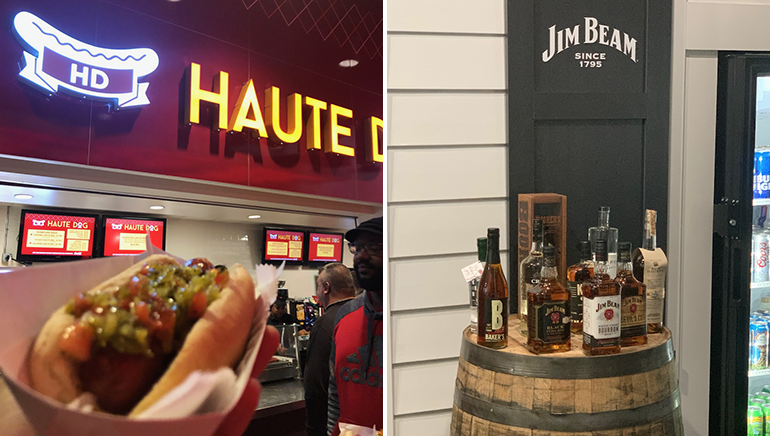 Jim Beam, Falls City and Centerplate have permission from the university and the Atlantic Coast Conference, of which the University of Louisville, is a member to serve alcoholic beverages on the premises during collegiate events, says Brian Gaskill, Centerplate’s general manager at the Yum Center, who emphasizes that access to these and other outlets that serve alcoholic beverages at Yum Center is tightly controlled to prevent sales to underage customers.

“We use all the traditional methods to promote responsible alcohol service,” he stresses. “We have alcohol compliance officers who are around to check if there are pass offs or anything like that.”

As for the upgrades to the food stations, “We had an opportunity to refresh our concessions stands and bring more of the local flair and flavor to them,” Gaskill explains, noting, for instance, that Farmstead has sponsorships with Kentucky Cattlemen for ground beef and Pilgrim’s Pride for chicken breasts. “And of course, the Jim Beam Bar and the Falls City Beer Garden are also local [companies], because we want to make sure we support local businesses,” he adds.

The Farmstead and Haute Dog brands are concepts that were developed by Centerplate for premium arena environments like the Yum Center and are designed to adapt their menus to local flavor preferences and locally sourced products.

So far, popular choices at the newly branded food stations include an adaptation of a Chicago hot dog with a relish topping that dices together various traditional Chicago hot dog toppings, which has been the top seller at the Haute Dog stands. Meanwhile, at Farmstead stands, a grilled chicken sandwich with a Key lime honey mustard sauce has “really taken off,” Gaskill reports.

“This helps the entire overall speed of service by adding more points of sale to the arena,” Gaskill explains.

A new premium club for suite holders includes access to a new premium lounge with a cash bar as well as to rolling bars, and also to a significantly expanded menu emphasizing easily consumed, portable fare.

“We’ve found that the majority of our suite holders like snack foods, things that are simple like hamburger and short rib sliders, buttermilk fried chicken, and chicken and biscuits,” Gaskill observes. “We also customize packages for each event and try to incorporate different things, whether it be an artist or a team that we’re playing, just to bring a different flair to each event.”