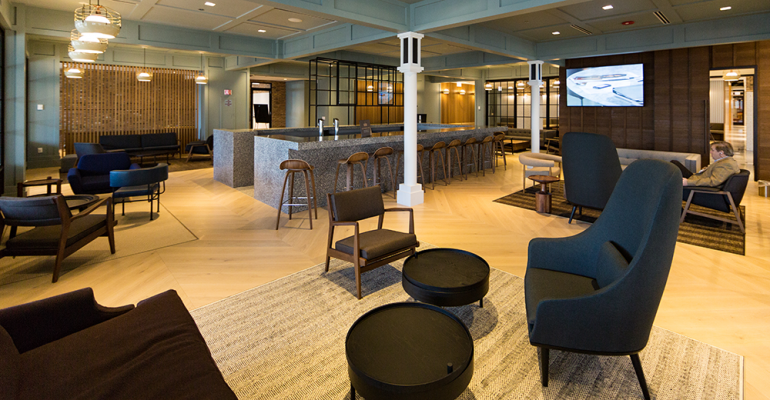 The Tower House is a casual café and expansive tenant lounge and bar.
News & Trends>Business & Industry

Providing specialty coffee and tea onsite was one goal of the project.

Building owners and property management companies are battling to attract the world’s top companies as tenants. “It used to be that the area the business building was in was the attraction – say, the fact that it was in downtown Chicago near Fulton Market – but the building is becoming the self-contained amenity in itself,” says Michael Schultz, founder of Infuse Hospitality, which recently launched two new dining options in Chicago’s Willis Tower.

Last year, EQ Office and Blackstone began a $500 million renovation of the tower, formerly known as the Sears Tower, that contains almost 4 million square feet of office space and upwards of 5,000 employees from businesses ranging from law firms to large airline corporations to insurance companies. This summer, Tower House, a casual café and expansive tenant lounge and bar, opened on the 33rd floor and Altitude Café (below) opened on the 66th. 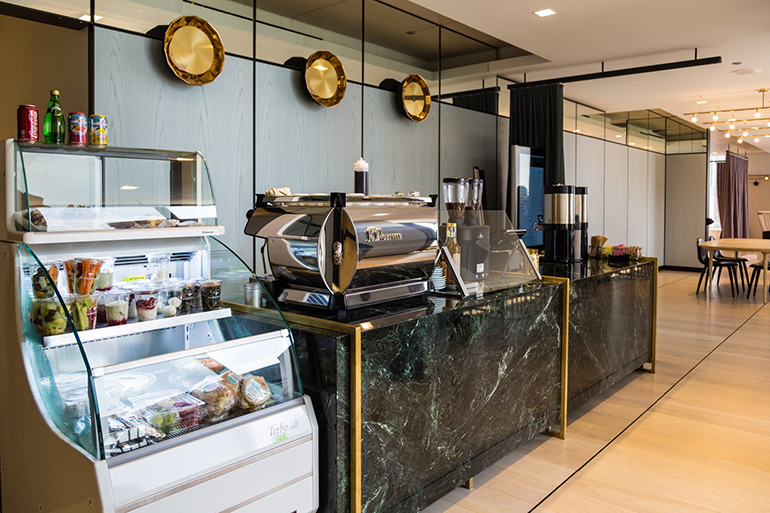 “Today's workforce is looking for a similar or better experience than they would expect when they're going down the street to the new café or restaurant that opened,” says Schultz, who says his firm excels in activating spaces and creating a sense of community. “On-site dining can offer a new kind of employee benefit, assist in shifting a workplace culture or create an area where people can share best practices,” he says. “In today's business world, employees have become the most important client or customer.”

Foremost, Schultz says EQ and Blackstone were clear that they wanted a best-in-class coffee and tea experience in the building. “The average employee spends 67 hours a year away from the office to seek out specialty coffee and tea,” he says. “What EQ has done is taken that and said, ‘You know what? That doesn't have to be the responsibilities of the organizations themselves. We as the owners of the buildings can offer this as an amenity to tenants.’”

To that end, both Tower and Altitude have robust coffee and tea programs with rotating roasters. They also use different specialty elixirs to make cocktails that are tea or matcha-based that have color-changing effects. They’ve also hired trained baristas as opposed to expecting general café staff to just hit buttons on a coffee machine. “Years ago, Starbucks did a great job ushering the trend in which coffee drinkers progressed from simply Folgers and Maxwell House,” says Schultz. “We’re taking that to the next level by making world-class coffee and tea available right where you want it at work. We’re not only satisfying palettes, we’re freeing up people's most valuable resource, which is time.”

The two dining spaces, which both have panoramic views of Lake Michigan and the Chicago skyline, are unique enough to cater to varying demographics. For one, moving amongst the tower’s 110 floors can mean time-consuming transfers at different elevator banks, so the two cafes offer a chance for more convenience. They also offer a different kind of dining experience. Executives may prefer Altitude, which Schultz says is more sophisticated in its design and a little quieter than Tower House. It offers grab-and-go options of breakfast sandwiches, hard-boiled eggs, fruit salad, veggie cups and salads in addition to its extensive coffee and tea menu. 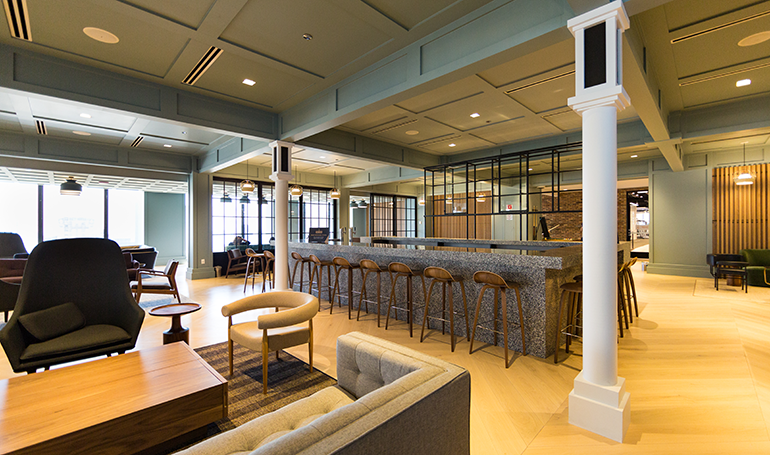 Meanwhile younger staff may prefer Tower House (above), where the music and design is more vibrant and livelier. Over 11,000 square feet in size, it’s open until 8 p.m., has daily drink specials and offers small-bite menu items such as hummus platters, street-style tacos and bruschettas. There’s a café and seating area, a bar, breakout rooms for special events, and an area with pool tables and ping-pong tables. “You could literally go down there three or five times a day and have a totally different experience,” says Schultz, who said they treated the space with the same attention as if opening a restaurant. “We took deep dives into how the energy flows throughout the spaces, incorporating the color scheme of natural elements, picking music, considering how food and drink odors exist in the spaces and choosing the right lighting.”

Since opening earlier this summer, Tower House is now a happening spot even after work hours during the week. “I’ve seen people there not just for groups for after work events, but people who want to go there and chill,” says Schultz. “They're really enjoying it. And so, while there's a lot of positive data points, that's the one that makes me really proud, that Willis Tower employees are choosing to stay and hang out on their own.”