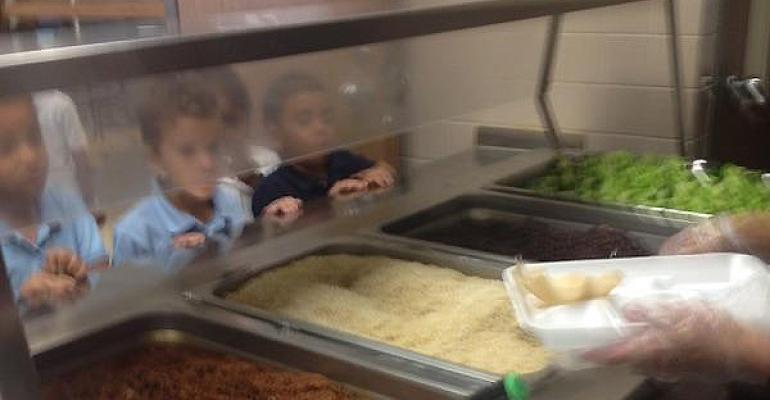 <p>ON THE LINE: Students are liking the new, semi-scratch lunches at 60 Cleveland schools, a departure from the prepackaged meals of the past.</p>
Operations>Management

A new director arrived at Cleveland Metropolitan School District this fall determined to convert two-thirds of the district’s kitchens from prepackaged to semi-scratch by the end of the year.

At Huntsville (Ala.) City Schools, Joseph Vaughn put into place a successful school lunch program and summer feeding initiative that received recognition from the USDA.

When Vaughn moved north earlier this year to take the reins as executive director of food and child nutrition services at Cleveland Metropolitan School District (CMSD), his first focus was making improvements to the way lunch was served.

“For years, many locations of CMSD served food individually packaged,” Vaughn says. “The food was just heated up in serving containers, and that’s not appealing to the eyes.”

Vaughn quickly got the team on board to take big steps toward scratch cooking, and if not scratch then at least a family/cafeteria style of plating prepared food in a nicer way.

“The first thing I decided to do when I got here was to change the style of food,” Vaughn says. “What was being served, I’d call it TV dinners. I wanted to get away from that.”

The goal Vaughn set was to convert two-thirds of the 88 schools to a fresher cooking model, not quite all-scratch, but cooked in batches and plated “so it looks more like something cooked at home,” he says.

By November the goal had been met and surpassed, with 60 out of the 88 schools converted. Vaughn says the transition has gone smoothly in those schools and already, the new serving style is responsible for increased participation, and thus, federal reimbursements.

“The kids are excited when they get food like this,” he says, adding that the data from August, September and October show that about 1,000 more lunches per day were sold in 2015 compared to 2014.

So how did they get there?

Having come from a hotel management background, working at the Howard Johnson hotel chain around the South early in his career, and now tasked with managing a school system’s food, Vaughn keeps his eyes on each dollar.

He says moving to food that’s cooked batch style and then plated has proved to be more affordable than several individually wrapped components on a plate.

“The prepackaged ready-to-eat meals had an entrée and side items, so you had four individually wrapped things on a plate,” Vaughn says. “For the same exact meal, it’s about $1 cheaper, give or take a dime, if you batch cook it.”

The high schools in the district had already gotten away from the prepackaged meals, so Vaughn made sure recipes were shared and the wheel wasn’t reinvented.

“I had the cost of the items we were selling at the high schools,” he says, explaining he was then able to cost out the same menu, comparing it to the prepackaged menu items. He realized quickly it was a dollar cheaper per meal.

Vaughn says in many cases he determined that just the packaging of some items was contributing to a higher cost per meal.

Adding another piece to the puzzle, a few schools in the district were originally built without kitchens (Vaughn speculates that this is because the schools were built in an era sometime last century when school children would go home each day to eat lunch).

Those schools with no kitchens are currently still using the prepackaged food. But they could potentially be served by other schools that do have kitchens—the food would be transported from one school’s kitchen to another.

Increased labor costs haven’t been a problem, and the need for additional staff at some locations has been addressed by shifting staff from one location to another.

“Maybe we had too many people working at one location, so we move people from school A to school B,” Vaughn says, adding that the move provided an opportunity to address some inefficiencies at the same time.

For example, point-of-sale technology is also pretty outdated—and in some locations simply not functioning—so Vaughn has ordered new equipment.

Next, Vaughn has set his sights on establishing a summer feeding program that would feed three meals a day to all children under the age of 18, regardless of which school district they attend.