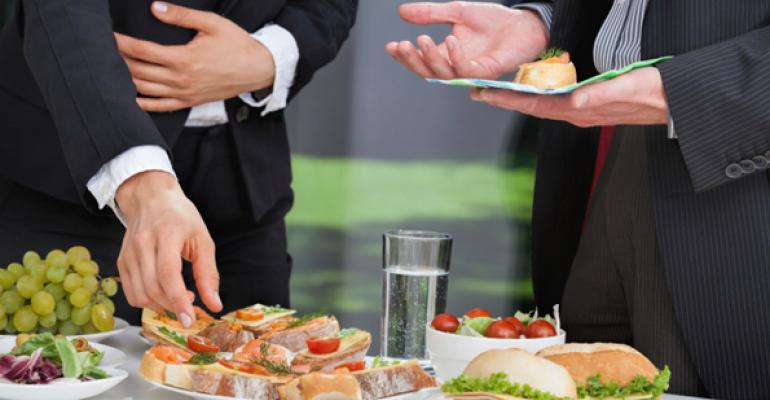 How Smaller Management Companies Can Thrive

Starting a contract company sounds easy enough, but competing with the big boys isn&rsquo;t. Here&rsquo;s how three companies have succeeded.

The hero of Jonathan Swift’s famous tale, Gulliver’s Travels, once found himself in the land of Brobdingnag, home of 70-foot tall giants. He had to step lightly and quickly to avoid being squashed underfoot.

That’s the way numerous local and regional foodservice contractors survive and thrive in the land of their 70-foot tall national and international competitors.

Gulliver escaped from Brobdingnag when a giant eagle scooped him up and dropped him in the ocean, where a passing ship rescued him. There’s no giant eagle to rescue the smaller foodservice operator. He or she has to use skills, strategy and strong customer relations to keep and gain business in the fiercely competitive corporate foodservice marketplace.

“He or she” is the right phrase. Nearly all of these companies are privately held, usually led by one or more founders who had left a larger contractor to pursue their own vision. But they hardly fit the image of a “mom and pop” business. A company doing ten to even a hundred million dollars annual sales is small in the contracting world, but is the employer of hundreds of people—not exactly a candy store.

How do they do it?

Café Services of Londonderry, NH uses the same approach, aiming for corporate locations with 500 to 1,000 employees, says Brian Stone, founder and CEO. “We go into smaller locations the big boys can’t afford to go into.”

From a start in 1993 in the metro Boston market, Stone’s company has grown to $35 million in sales with accounts from New England to Delaware. About half of his business is with corporate clients; the balance is in public schools, summer camps and senior dining.

“We win clients who are looking for something very specific,” he says. “We beat them [the major companies] on quality, service and purchasing.”

But he’s able to compete toe-to-toe with the largest competitors when the circumstances are right. Stone cites one large, multi-location account where his company operates four dining facilities, having succeeded a national contractor at two of them. He says his company has recently been awarded a fifth site after a competition with another national contractor who had offered the client a substantial “signing bonus”—up-front cash—just as a professional sports team would offer a promising rookie.

Hitting them where they ain’t can take another form: concentrating in a market niche and territory. Developing a strong reputation among a specific type of client in a limited geographic area can be both profitable and enable the small operator to compete on a more than equal basis in its chosen arena against larger, more generalized competitors.

By specializing and limiting the number of clients, the company’s leader can have a direct hand in each operation, creating strong client relationships and ensuring meals and services live up to the leader’s standards and vision.

That’s the strategy of Food for Thought, a Lincolnwood, IL, company serving clients in Chicagoland and nearby areas of Wisconsin and Michigan. Organized as a catering company in 1983, a contract foodservice division, FFT Hospitality Group, was formed in 1989.

“We stay in the higher end [of the market] where the amenity is as important as the price, providing an exceptional food experience.” explains Nancy Sharp, co-founder, president and CEO.  “Gracious hospitality and amenities are part of how companies operate now.”

The specialization has resulted in a roster of some 20 clients. That’s not very many, but they generate some $27.5 million in sales—more than $1.25 million per account, well above the industry average. Clients include law firms, museums and colleges.

Hard work can pay off

How do you organize and succeed as a foodservice contractor? “It’s a lot of hard work,” says Steve Hiligan, co-founder and president of Creative Dining Services, Inc., headquartered in Zeeland, MI., a comment echoed by other founder/owners.

“You have to do the service right; do the food right. That’s a given,” he says. “We work best with companies looking for a partnership,” he says. “Some of the bigger companies try to sell their own solutions. We say, ‘Tell us the key benchmarks you want to achieve,’ [then] roll up our sleeves and go to work with their end result in mind.”

Established in 1990 by Hiligan and a partner, both veterans of national contractors, the company has grown to $68 million in sales, primarily serving colleges and corporate accounts, including some Fortune 100 companies and a mix of senior communities, conference centers and schools in the Midwest and Southeast.

Creative’s two best sources of business, Hiligan says, are “clients who had a larger [foodservice] company and felt like a small fish in a big pond,” and organizations that self-managed their foodservices “and question whether they have the right person [as a replacement] when their manager leaves.”

Starting a foodservice management company is deceptively easy, compared to starting a restaurant. All you need is a client, who furnishes the building, equipment and customers.  What could go wrong? Don’t be fooled. As with a restaurant, a knowledge of food, some management experience and a desire to succeed are important, but not enough.

In addition to a knowledge of the business, maybe gained as a manager or chef, the would-be entrepreneur needs business knowledge: how to identify and sell the right kind of client; negotiate an equitable contract; set up and manage a corporation; accounting, human resources and all the other disciplines that must be combined to ensure a successful enterprise. And then how to plan, market and grow the company.

As Hiligan said, it’s a lot of hard work, but for those who are up to the challenge, turning an idea and a vision into a reality and succeeding is a reward many entrepreneurs find more satisfying than even the financial profits.