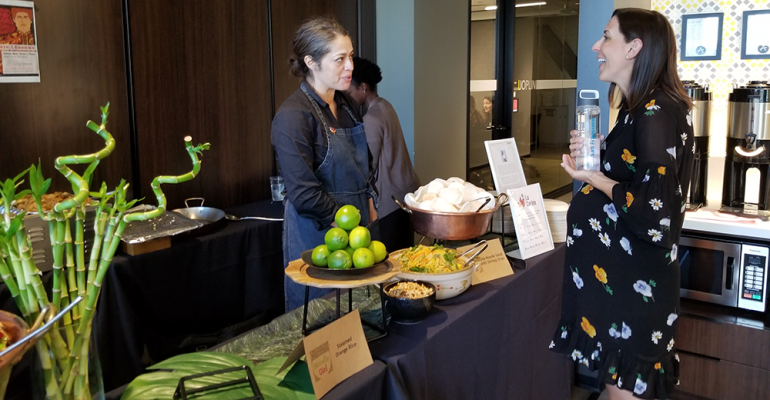 The foodies who work at LinkedIn appreciate the chance to meet and greet women entrepreneurs and try delicious new food at the same time.
News & Trends>Business & Industry

“A training ground, a practice arena and the big stage all rolled into one” for La Cocina, a San Francisco-based nonprofit working to solve problems of equity in business ownership.

A culinary business incubator at heart, since 2005, La Cocina (pronounced la co-see-nah, meaning “the kitchen” in Spanish) helps immigrant women and women of color launch their restaurants and get positioned for success in the marketplace—not an easy thing to do anywhere, much less in a food mecca like San Francisco.

La Cocina supports businesses by providing an affordable kitchen space, industry-specific technical assistance and access to market opportunities with the idea that “food lies at the heart of this community…and you don’t have to look far to find hidden entrepreneurs in the kitchens of many homes,” according to the mission statement.

That’s due to “systemic inequities in our economy as well as barriers to entry for talented entrepreneurs that artificially dictate a marketplace that is less delicious than it could be,” Zigas says. To date, La Cocina has graduated over 50 businesses into economic and operational self-sufficiency, with 30 brick-and-mortar locations throughout the Bay Area.

An opportunity to lift up strong professional women and get amazing one-of-a-kind food (like Taco Thai) at the same time? This was the right opportunity for LinkedIn, the largest professional social networking site.

LinkedIn’s San Francisco office is an ultra-modern workspace in an office tower in San Francisco’s SoMa neighborhood, where the Artisan Restaurant Collection by Sodexo handles foodservice. Artisan was developed by Sodexo in California, a response to a market need for hyper-local, chef-driven, farm-to-fork food. Part of Artisan’s debut at LinkedIn has been partnering with La Cocina, something that got the attention of the LinkedIn “foodies” and socially conscious employees right away.

“We are excited to partner with La Cocina and support its mission to empower minority and immigrant women entrepreneurs while they launch and grow their businesses,” Anand says. 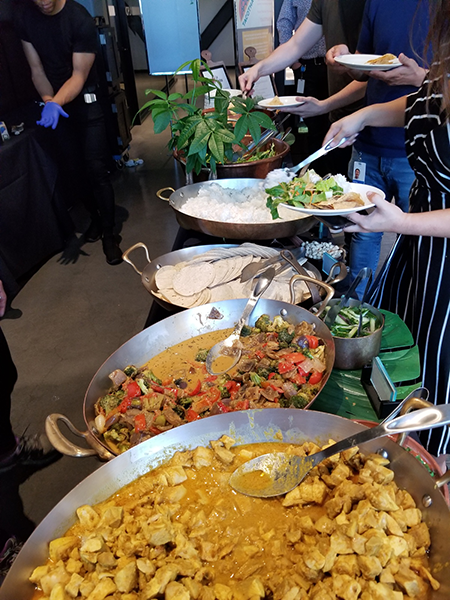 Twice-monthly La Cocina pop-ups at LinkedIn bring a variety of dishes from all over the world from entrepreneurs right in the neighborhood.

The partnership brings to life LinkedIn’s corporate tenets of “community, diversity and inclusion,” Anand says, “and the result is a great example of how diversity can lead to innovation and a great culinary and workplace experience.”

Each week, La Cocina entrepreneurs set up a pop-up restaurant to feed LinkedIn staffers, which “helps them drive awareness and interest in their business and showcase their culinary skills,” says Dasha Ross Smith, public relations director at Sodexo.

The LinkedIn employees not only try the food, but they hear the stories as well. For example, one La Cocina graduate, Lamees Dabhour, began cooking out of her home to support her family as they escaped domestic violence. “Her vast cooking knowledge and her Arab hospitality quickly gained traction and she met La Cocina. Here, she has grown her business tremendously, serving food from the Arab diaspora.”

A couple of more success stories: Alma Rodriguez—after cooking for others for decades—has  launched Mixiotes, a company focused on the wrapped and charcoal/steam-cooked meats of Mexico. Binita Pradhan, also a domestic violence survivor, was delivering pre-packaged Nepalese food throughout the city in her car with her infant son in a car seat. Through La Cocina, Pradhan was able to formalize her business and now has 18 full-time employees, two locations and $1.5 million in annual sales.

On the onsite side of collaboration, La Cocina businesses have historically worked with foodservice providers for single-item servings or irregular pop-ups, so this partnership with LinkedIn is a significantly different, Anand says.

“The intentionality of this collaboration has been unique and inspiring,” Anand says. “From our end, it’s an incredible opportunity for entrepreneurs to gain real-world experience…it’s a training ground, a practice arena and the big stage all rolled into one.”