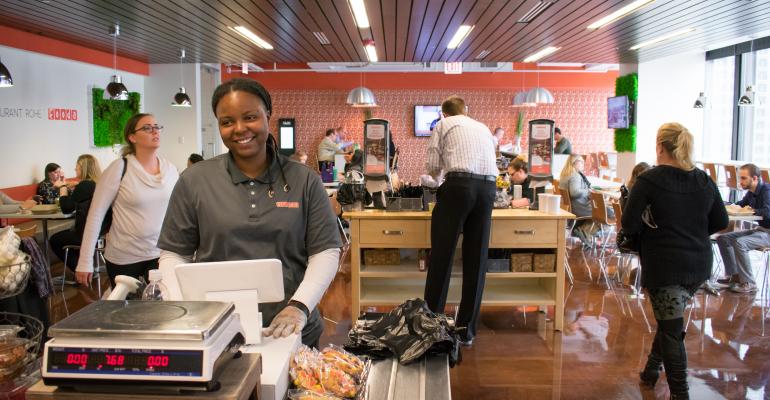 Chicago’s multitenant AMA Plaza replaced its traditional cafeteria with a series of pop-ups.

Downtown Chicago is a tough place to compete for lunch business if you are an onsite dining program. No matter what home field advantages you may enjoy, sooner or later your target population feels the call of the street. Meanwhile, you still have to deal with your fixed costs.

Of course, there’s the option of simply surrendering and letting your staff forage for lunch at all the nearby eateries, but that isn’t ideal either because there are benefits in productivity, collaboration and team-building to offering an in-house dining program.

That was the dilemma facing the management team at AMA Plaza, a multitenant office complex with an in-house population of around 2,500 located between North State St. and North Wabash Avenue in the heart of the Windy City’s downtown. AMA Plaza traditionally offered tenants a conventional in-house foodservice operated by a respected management company, but with all the street competition, it was a tough go. 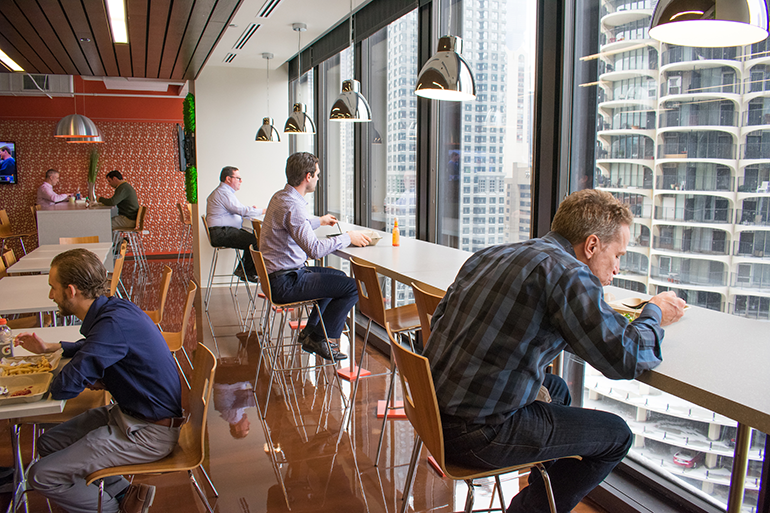 Being situated in the heart of downtown Chicago means that AMA Plaza’s in-house dining program faces plenty of street competition.

Rather than running up the white flag, however, AMA management decided on a third way, which was to convert its existing cafeteria into a host venue for established outside restaurants to come in and serve their menus on a rotating basis.

To signal the conversion, the cafeteria was renamed Restaurant Rohe in honor of noted architect Ludwig Mies van der Rohe, who designed the building, which is both a Chicago Landmark Building and listed on the National Register of Historic Places.

In effect, the guest restaurants provide the food, disposables and labor while AMA Plaza provides the infrastructure and customer base. The guest restaurateurs get to use an established satellite location with access to a desirable onsite population, and if they are eateries focused mainly on dinner business, they also get to add some lunch counts while also promoting their brands. The building, meanwhile, gets an attractive in-house dining option for its tenants at minimal cost.

AMA Plaza’s arrangement is facilitated by Fooda, which won an FM Best Concept Award last year for its café operation at another Chicago area site, the Hyatt headquarters.

Fooda, which specializes in connecting commercial restaurant operators with clients looking for onsite foodservice options, had the advantage of being in on the ground floor in designing the Hyatt dining venue; at AMA Plaza, it had to accommodate a retrofit.

That wasn’t really a problem, says Steve O’Brien, vice president of enterprise sales for Fooda. “The Fooda model is not a cookie-cutter approach,” he says. “We have a lot of flexibility to take the existing footprint in an institutional cafeteria and install our model in that space.”

Fooda’s approach involves engaging a permanent resident vendor to operate the basics—the grill, the deli and the salad bar—which are then augmented by up to four pop-ups of local restaurant brands, with the number depending on the size of the venue and the onsite population, “so every single day, the restaurant change,” O’Brien explains. “So you have the resident vendor where the [customers] get to know the people, and then you have this rotation of restaurants popping up so you don’t have the menu fatigue associated with the traditional cafeteria model.”

The same model can work for breakfast service.

At AMA Plaza, the conversion from traditional cafeteria to the Fooda model solved several issues.

“We were subsidizing the operation completely, so it ran at a loss and the tenants were paying for that,” explains Susan Hammer, general manager at AMA Plaza and a vice president for property management firm JLL. With the changeover, “we were able to use the existing grill, sandwich and salad stations, and we were able to convert the hot food station [to accommodate a rotation of pop-ups].”

The grill and deli are also responsible for serving breakfast each day. Meanwhile, the hot food station rotates daily among some 30 restaurant concepts, many of them local favorites but also including some regional and even national brands.

The pop-ups generally prepare their food in their own kitchens before bringing it over. The menus generally include half a dozen or so items from the concept’s regular full menu.

“Fooda’s really good about getting sales and such data associated with the restaurants that lets them know what’s popular and what isn’t, then they try to get a winning combination with variety to serve the tenants in this building,” Hammer says of the eateries chosen for inclusion in the rotation, which is also structured to provide variety, so customers won’t see two similar concepts back to back or even on the same week. Upcoming concepts are promoted through both intranet and physical signage.

The conversion to the Fooda model did produce an uptick in lunch participation, Hammer says, with the numbers on any given day affected by the pop-up of the day as well as by outside factors like the weather. But a big positive is the financial certainty.

“The operations are working more efficiently and profitably for the restaurants, and we now know what our costs are,” Hammer offers. There is a still a small subsidy to cover permanent staff labor cost, she adds.