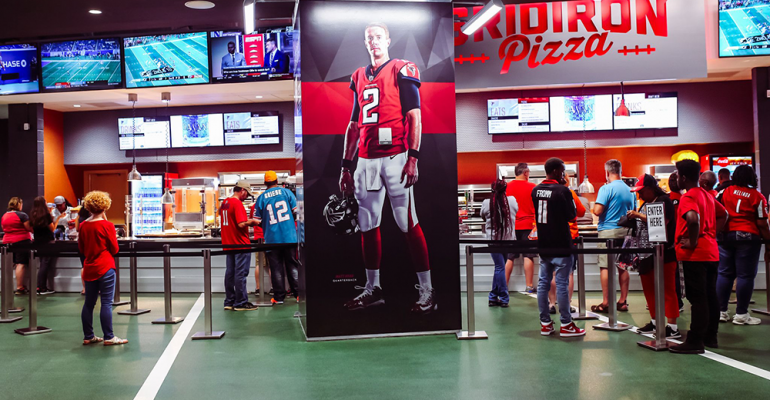 The home of the NFL’s Falcons will reduce prices by 11 percent on five of the top items and will also become the first NFL and MLS stadium to implement a complete stadiumwide cashless transaction model.

Mercedes-Benz Stadium (MBS) in Atlanta, which started a trend in the sports concessions world by cutting prices on some of its most popular food items, is doing it again. The home field of the NFL’s Atlanta Falcons and MLS’s Atlanta United has announced that it will reduce prices by 11 percent on five of its top items beginning with Atlanta United’s first home match March 10 against FC Cincinnati.

In addition, MBS says it will become the first NFL and MLS stadium to implement a complete stadiumwide cashless transaction model on that same date, becoming the second major sports facility to make such an announcement following Tropicana Field in Tampa, which made a similar announcement earlier this year.

The move follows up on what has apparently been a successful strategy to boost sales by encouraging more purchases through reduced prices. In 2017, despite a 50 percent drop in food prices, average spending per fan during Falcons games increased by 16 percent over 2016, accompanied by an NFL “voice of the fan” satisfaction rating of No. 1 in the league across all food and beverage categories.

The 2018 Falcons season proved just as successful as MBS continued to offer the lowest pricing in the league and fans spent on average the same amount as they did in 2017, while again rating the Falcons No. 1 in all food and beverage categories.

“[Falcons and Atlanta United owner] Arthur Blank repeatedly challenges us to find innovative ways to further improve operations across our businesses,” said Steve Cannon, CEO of AMB Group, which provides management and support services to Blank’s companies. “As we’ve always said, it is incumbent on us to listen and respond to our fans and we’ve heard that value, quality and speed of service are incredibly important; therefore, we’ve again made operational adjustments that address each of these areas. Our fans are our most important influencers and we want to ensure they have the level of service they’ve come to expect from Mercedes-Benz Stadium.”