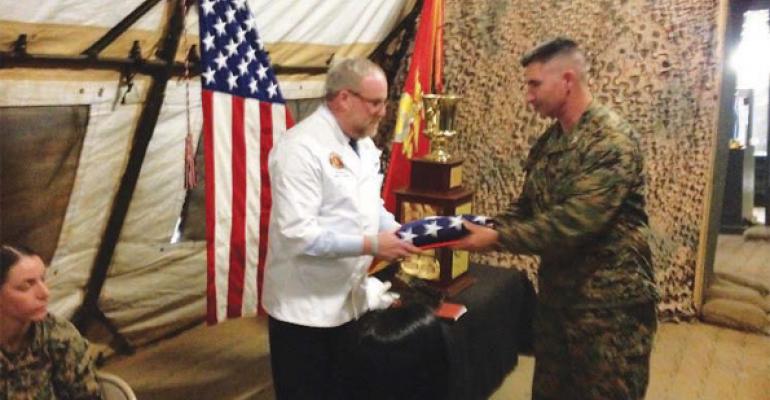 <p>Silverstein is presented an American flag that flew over the field mess at Camp Pendleton, CA. </p>
News & Trends>Business & Industry

Credit Suisse&rsquo;s Jay Silverstein spent a month on the road with the Marines helping to identify the best in their foodservice. He came back with respect for a lot more than just their food. &bull; GALLERY: Touring the Marines&#39; Foodservice Operations

Jay Silverstein can cross this off his bucket list. More than a decade after missing his first chance, the vice president of corporate real estate and services for Credit Suisse got the experience of a lifetime. In March, he returned from a month-long adventure as part of the National Restaurant Association Military Foundation program. He left New Jersey, his wife and job on Feb. 18 and spent the next 29 days visiting Marine bases as far as Okinawa, Japan to evaluate their foodservice across a variety of categories. His mission was to help identify the WPT Hill Award winners for excellence in Marine Corps foodservice. Since its start, the Society for Hospitality and Foodservice Management (previously SFM) had been a part of the similar Hennessey Travelers Program that evaluated Air Force foodservice, but Silverstein was the first to experience the Marines. Here are some of the highlights.

Silverstein: Usually it’s the president of SHFM selected after they serve, but when I was president back in the Stone Ages my family was very young and I couldn’t leave them. This opportunity came up in 2013 and I begged and pleaded with my wife, like with everything, and with all the kids out of the house, it finally worked out.

How did you prepare for the trip?

Silverstein: I read about previous Hill winners and studied up on Marines to understand their philosophy and some of the acronyms. I emailed everyone I knew who went. I talked to Dick Hynes [of Hobart and a 2006 Hennessy Traveler], who I’ve known for years and I know his wife and she knows my wife. I asked him what I needed to know, and he said, ‘Bring rubbers.’ ‘Whoa, Dick, wait a minute…’ He said, ‘Galoshes. You’ll be out in the field, your shoes will get dirty.’

Who did you travel with and how did the trip start?

Silverstein: The only communication I had with Lt. Col. Gary Spinelli and Master Gunnery Sgt. Marco Barnes, the two I’d be traveling with, was by email. I had no clue what they looked like, and I flew from New Jersey to Chicago to meet up with them. My flight got delayed and I was the last one on the flight. I’m running down the aisle and in the last seat in the last row. I was told not to upgrade my ticket to business class—it’s not polite for the military, who’ll be flying coach. So I’m in the back looking at everyone, eyeballing anyone in a uniform because I assume that’s how they travel. Once the plane gets off the ground, I start questioning everyone in uniform. They probably thought I was a crackpot.

I’m sitting in the worst seat in the plane and these two guys were sitting in business class because they upgraded. And they’re not wearing uniforms. They’re waiting for me when I get off the plane in Tokyo. It was one of those strange situations: You don’t know the people you’ll be with for the next 29 days.

Did you hit it off with your escorts?

Silverstein: From there we flew to Okinawa. It’s a long, challenging flight. Everyone is speaking Japanese, I don’t understand the language and I’m sitting there, smiling, with no clue what the hell I’m in for. We land and get picked up by more Marines there—in uniform, thank goodness, so I know I’m with the right people. I was told to call everyone by their proper titles and they’re calling me Mr. Silverstein. Both Lt. Col. Spinelli and Master Gunnery Sgt. Barnes had served in Okinawa and they were talking to other Marines and being perfect gentlemen, not a curse word at all. I’m a little taken aback. These are Marines! They’re trying to include me in conversations and I’m exhausted and totally lost. I’m not a straight-laced guy and don’t feel comfortable, so finally used some real guttural language to make them feel comfortable. That set the tone—I think they expected some formal investment banker. From that moment forward, I bonded with them. They were unbelievably respectful of me, to make sure I felt included in everything we did the entire time. They explained every acronym and it became a dinnertime joke as the Colonel would test me each night.

Learning From the Experience

Silverstein: The mess hall is like a corporate cafeteria. The field mess is to simulate serving troops out in the field and there’s a big difference. They’ve got a mobile kitchen and an entire protocol on how it’s set up and how to protect the perimeter. They try to use fresh as much as possible and not MREs. They put out salad bars, do baking on site and do a very commendable job. I think what’s important to keep in mind with field mess halls is these folks are out on the frontlines and doing what Marines are trained to do. If you ask, ‘What do you like best about being a Marine?’ Your answer will be: ‘Protecting this country. Give me a gun, I want to be on the frontlines.’ Meal periods provide a step away from that—it’s warm inside, they get healthy, good quality meals and a few minutes to unwind. They feel comfortable in the field mess so they can get back to being Marines. And the mess halls are as good as any in corporate or college settings. A lot are outsourced, run by Sodexo, and some are Marine run and others a combination.

From Okinawa, where else did you visit? 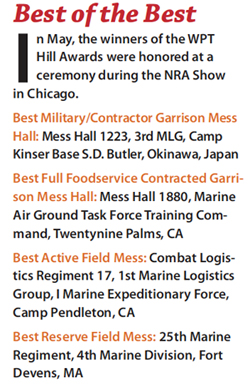 Silverstein: We went to Hawaii and Pearl Harbor, which is a pretty amazing experience when traveling with military. From there, we headed to Camp Pendleton, CA, where we evaluated both a field mess and a dining hall. Then we went to San Diego and Miramar and drove to Bridgeport, CA, to the cold weather high altitude-training base. I went from shorts in San Diego to two and a half feet of snow on the ground in the mountains. Then we went to Twentynine Palms, CA, and a desert warfare center. We flew to South Carolina and went to Paris Island and finished in Camp Lejeune, NC. At a field mess there, they actually staged a gunfight as we pulled up and threw me in a foxhole.

What did you learn from the experience?

Silverstein: My whole thing was to try and expose Marines to what life is like out there after they retire, this whole world of foodservice. They had no idea that corporate dining existed. Really, the Marines don’t do a great job of preparing folks for the afterlife, as I call it, or retirement. They’re petrified once they leave about what they’ll do and how they’ll find a job. They don’t realize what they bring to the table. A guy who’s put in 20 years is an officer, highly educated, probably with a master’s degree, and has great communication and leadership skills, takes direction well and is used to a hard day’s work. You want to gobble these guys up. That’s my message to anyone who will listen.

The gentleman in charge of all foodservice in Okinawa is running this huge operation, producing some 40,000 meals a day, plus he has a cook-chill plant and supplies to other branches of military there. You could have eaten off the floor. One day he was making ribs, dry rubbing and cryovacing them and freezing them. He prepared some and they were phenomenal. He was preparing fresh broccoli, chopping onions—everything with strict HACCP guidelines. These guys are pros.

And they’re worried about finding jobs?

Silverstein: Yes, every evening we went to dinner with staff and we’d talk. They don’t understand corporate life and I kept talking about what they brought to the table. I’ve communicated with many since. I might hire some and will recommend others. I’m more aware we should be hiring retired military folks, not just for foodservice, but everywhere. I’m more educated to the plight of veterans. That’s how this has affected me.

Silverstein: I saw great parts of the country and met a lot of great people. No one was unhappy doing what they were doing. All were proud to be Marines. And the civilians for Sodexo—they’d talk about the Marines like they were their children. They were proud to serve them. I feel much more American because of this experience. I’m more proud of my country than I was before. I was never not proud—it just wasn’t a part of my life.