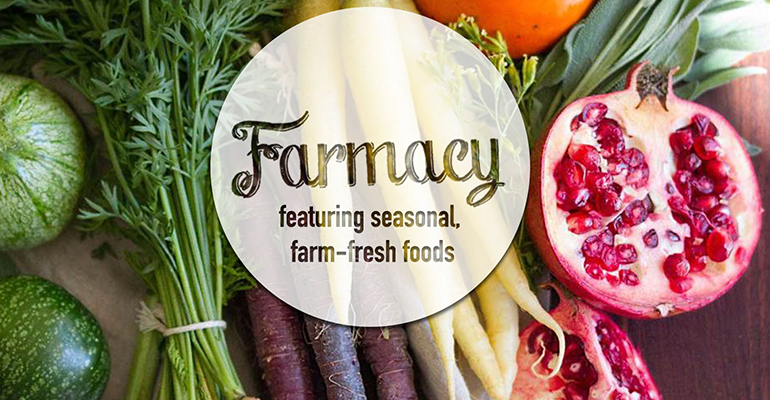 New B&I promo puts the farm at the forefront

Restaurant Associates’ Farmacy concept gets hyper-seasonal and gains fans with fresh flavors and the most vibrant, inspirational produce from local farms.

Can coming face to face with fresh produce—and the farmer who grew it—inspire healthy appetites? Restaurant Associates (RA) has been testing that idea since last fall with its latest seasonal initiative, Farmacy.

The hallmarks of the new, versatile concept include setups in cafes that read as “farmers’ market:” Think crates stacked up with bright carrots and super fresh kale. In other words, Farmacy aims to show the whole turnip—or radish or anything else in season—as part of the dining experience.

The time was right for this corporate client, because like many others in the B&I space, “our market is really demanding of local everything and our clients are very upfront about their eco-friendly initiatives,” says Alexis Weakley, marketing innovation and project manager for Restaurant Associates. “So this is the perfect time to feature this.”

Also, just seeing the words “local” or “farm” can have a positive effect on the average consumer, Weakley says.

“Even in my local grocery store, when I see a label on milk that says it’s from a local dairy, I will buy that over other milk, just because it’s local,” Weakley says. “So on each menu, we show which produce comes from which farmer and how far away that farm is. We have handwritten signage and there’s a farmers’ market look that’s visually appealing.”

The whole-produce displays also get employee diners into the “fresh” mindset, another buzzword for today’s consumer, now appealing to people more than “low-fat” or “heart-healthy” monikers on the menu.

Heirloom carrots were highlighted recently, with an overflowing display fresh from the earth and signage explaining their provenance, all leading up to the carrots featured in a special dish (which changes from location to location, as chefs have a lot of creative control on this concept).

The theme is typically carried throughout several stations within the cafes, “with one type of produce being featured at different stations, as applicable,” Weakley says.

Restaurant Associates plans to move ahead with this concept, working with individual accounts to work with suppliers and connect to farmers, some of whom have already visited for lunch, sharing their stories with employees, who can then go try the food for themselves.

“I definitely think people are seeking out very fresh, flavorful food that’s very colorful,” Weakley says. “Beyond that, I think when it comes from a local source, people are more apt to want it, especially as the plant-forward movement keeps growing.”