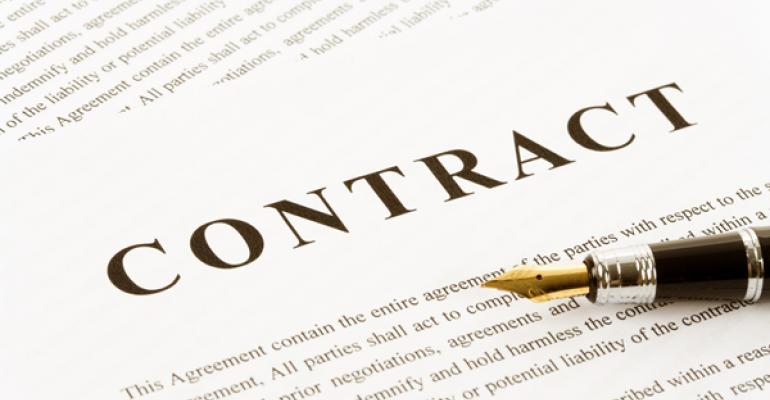 Picking a Foodservice Provider: The View From Both Sides

When a company issues an RFP, the process of selecting an operator has just begun. Here&rsquo;s a look at what goes into a good proposal and how companies often make their decisions.

“I’ve had it with these guys. We need a new foodservice operator,” says someone way up in the corporate hierarchy. Or, “Our cost of foodservice is running too high. Let’s get someone who can do it for less.” Or maybe, “We’ve had these people running our foodservices for years. Maybe someone else can do it better.” Or sometimes: “Who will operate our foodservices when we open the new building?”

These are the main reasons why a company decides to employ or replace a foodservice contractor. Responsibility for the selection usually falls on a facilities manager or office services manager who works with a team of other managers that has an interest in the foodservices. In large organizations, including those with multiple locations, someone with a vice president’s title and a purchasing manager may lead the process.

Once in a while, a foodservice operator’s sales rep gets lucky. He or she has established a strong relationship with the company’s decision-maker and secures the contract with little or no competition. But more often, it’s not that easy. The company will inaugurate a formal selection process by issuing a request for proposals (RFP) to several operators.

What goes into an RFP

A thorough RFP process typically takes approximately 90 to 120 days from start to execution of a contract with the selected company. It should be thorough: A company’s foodservice can cost from one million to several million dollars—and much more for a large company’s national contract for multiple locations, whether the dollars come from employees’ pockets or the company subsidizes the service.

The process within a company usually starts with the selection of contractors to be invited to submit proposals. The company then issues a written RFP to the selected companies.

For a start, says Bernadette Ventura, Manager of Food and Conference Services for Health Care Service Corp., Richardson, TX, management should have “realistic expectations, including whether the operation can be a P&L (contractor takes the risk of profit or loss). If the client wants healthy meals and low prices, seeing a tie to better eating practices, they may want to consider a subsidy.”

What should go into the RFP? “Solid, valid information—real numbers and KPIs [key performance indicators],” Ventura says.  She should know; she’s been on all sides of the process. As the foodservice liaison for American Express Company, she led a global RFP process for the company after managing operations for Marriott Corp.’s former foodservice management division for several years. Later, she was a consultant for Cini-Little International Inc., a leading foodservice consulting firm, before joining Health Care, where she’s currently managing a selection process for operators of “mini-markets” at several regional offices.

A good RFP also includes the company’s standards and expectations and tells proposers what to include in their offers and how to format their responses.

On the contractor side, when an RFP is received, “I read through it and prepare a recap for my team,” says Lisa Welch, Midwestern Senior Sales Director for Guckenheimer Enterprises, the fourth-largest U.S. corporate foodservice provider to the corporate dining segment. “I’m looking to determine if we have a relationship with the client, what their organizational philosophy on wellness is and how foodservice fits into that; if they view foodservice as a benefit to attract and retain talent.”

It’s not unusual that one of four to six invited contractors will decline to participate in the process. Reasons include whether the site is within the company’s operating area or if there’s “not enough information to proceed with good financial projections,” said a director of new business development for a Midwestern regional contractor. “The amount of investment for the new vendor to incur is considered.”

A contractor also will decide not to go forward if they think the prospective operation is too small, too large or unlikely to be profitable. The offer of a substantial investment, sometimes in six or seven figures for a large project, is a key selling tool for the largest contractors, which smaller, privately held companies frequently cannot match.

Guckenheimer’s approach to preparing a proposal is typical. “Sales manages and drives the process,” says Welsh, noting it includes strategy, offer, proposal development, site visits and proposal presentation. “My operations team is in complete control of all operational aspects while I focus on partnership and strategy.”

How a company evaluates the proposals

When proposals are submitted, the company’s evaluation team has a formidable task—reading and analyzing from two to six documents that can run to 200 pages or more.

“I look for realistic responses and truthful numbers,” says Health Services’ Ventura, “not ‘we can run it on a P&L’ when the requirements of the operation dictate a subsidy.  The proposal should offer fresh, healthful food and an efficient operating model.”

This is the point where a selection process can bog down. The members of the evaluation team can quickly discount proposals that miss the mark—they don’t meet the company’s requirements or have unrealistic financial projections. But what to do with the others, which can seem to be very similar? Team members have other priorities related to their main jobs and often put off meetings and decisions about how to proceed. This is important, but they have projects to manage, meetings to attend, reports to prepare and e-mails to answer. The proposers are often left hanging, wondering what’s happening.

“I solicit feedback from the client on the response and prepare my team for presentations, site visits and tastings,” say Welsh, in the interim between submitting the proposal and learning what the next step will be.

Occasionally, the decision-maker will pick a company on the strength of the proposal and a few telephone conferences with the contractor. This is more likely when cost is the overriding factor in the selection.

More often, the most responsive proposers will be asked to attend an interview or even make a formal presentation, complete with PowerPoint shows, elaborate food displays and tastings. When cost isn’t the most important consideration, here’s where the contractor wins or loses.

The contractor’s delegation is headed by the sales representative and includes one or more executives (the more important the contract, the higher the level of executive), the regional vice president, district manager and support personnel, including an executive chef in a spotless white uniform.

The client often will want to meet the candidate’s on-site manager, but the contractor may be reluctant to present one.  A qualified, already-employed manager isn’t readily available, or the time lag between award and startup date is so long (as in the case of a facility still under construction) that the promised manager may not be available when expected.

When contractors under consideration seem evenly matched, the decision-makers can have a difficult time choosing.

In one instance, a large company that was moving to new offices had to choose between its longtime contractor and the contractor’s principal rival.

Both companies were subjected to intensive interviews. The incumbent’s regional vice president had been transferred to this city only a few weeks before and fumbled answers to some questions about its operations at other, similar companies in the area. Responses by its rival were smooth, confident and complete, but some interviewers still favored the incumbent, whose on-site manager, executive chef and district manager were well liked and competent.

After the incumbent’s interview was over, the company’s chief financial officer, who had said little during the session, spoke up: “Their oatmeal is too runny.”

The other company was awarded the contract.