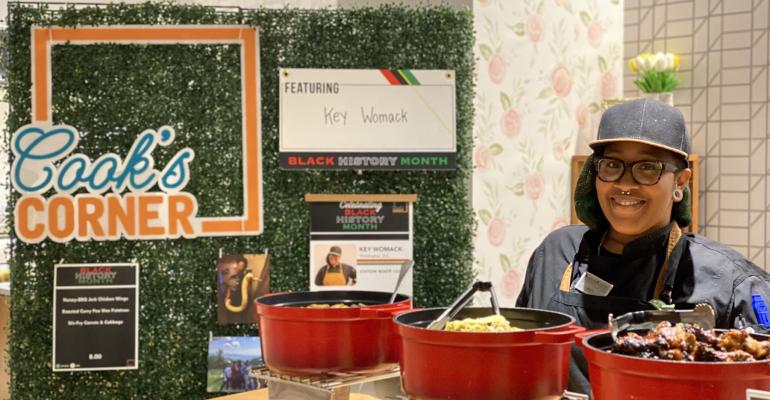 Start Slideshow ›
As part of its Diamond celebration, Restaurant Associates says it will be strengthening its commitment to community endeavors, inclusive staffing and supporting women- and minority-owned businesses as key pillars of its business strategy.

Restaurant Associates (R/A), known for its onsite dining management and catering in high-end locations like museums, cultural centers and premium corporate and higher education clients, is celebrating 75 years in the industry with new top management and new avenues toward continued growth. Leading the company forward from its diamond anniversary will be new the newly installed team of CEO Ed Brown and COO Michael Gallagher, along with two other new additions: Dean Martinus as president of catering services and Einav Gefen as chef/innovator, a unique title held by Brown for the past 11 years that emphasizes the company’s chef-driven, culinary-first culture.

In taking the helm as CEO, Brown said his focus would be on growth, with an emphasis on public restaurants, a goal that aligns well with RA’s history as the creator of landmark restaurants like Four Seasons, Brasserie and Trattoria, which many credit with playing a critical role in putting New York on the international fine dining map in the 1960s and 70s. With more than 30 years of experience as a chef that includes a number of high-profile concepts in the RA portfolio, Brown is well positioned to continue and advance the company’s position as restaurateurs in addition to serving the world’s leading workplace, education and cultural organizations.

Gallagher, a European-trained chef with more than 25 years of experience in culinary and operations, had previously served as president of RA’s Managed Services unit in which he oversaw its corporate and educational dining accounts. Martinus began his career at R/A and then led premier New York catering firm Great Performances to a quadrupling of its off-premise catering business as president before returning to R/A in 2019, while Gefen, who most recently served as corporate executive chef for Unilever, is an acclaimed culinarian who has worked in such kitchens across the globe as Mul-Yam in Israel and Danal in Manhattan’s East Village.

“R/A was founded as, and continues to be, a restaurant operator,” Brown says. “We’ve got three trained chefs at the helm who along with their business experience, lead from a chef’s point-of-view. As we envision what the next 75 years looks like for us, the mantra of ‘Once a Chef, Always Chef’ couldn’t be more true. We’ll use the creativity, attention to detail and commitment to service that is ingrained in each of us to keep disrupting the industry and delivering new dining concepts that will define the landscape for years to come.”

As part of R/A’s Diamond celebration, the company will also be strengthening its commitment to community endeavors, inclusive staffing and supporting women- and minority-owned businesses as key pillars of their business strategy, committing to making 25% of its suppliers women and/or minority-owned by 2023. The company has formed a new partnership with Reframe, a tech enabled consulting and advisory company that helps organizations build more inclusive employee experiences at scale, and has already been one of the top employers for graduates from diversity-promoting sources such as Hot Bread Kitchen, Job Path's Consortium for Customized Employment, Fedcap Rehabilitation Services Inc., C-CAP and Best Buddies and continues to bring women- and minority-owned suppliers into the fold, consistently running pilot programs and full-scale launches with their distinctive products. Among such brands R/A works with are Matriark Foods, a women-owned upcycler of fresh-from-the-farm produce that would have otherwise gone to waste; Atlantic Sea Farms, a women-run, sustainable kelp aquaculture business; and Lekka Burger, a women-owned concept focused on chef-created vegan burgers

Here’s a look back at some R/A highlights, including some of its many winning entries in FM’s Best Concept Award competition through the past few decades…