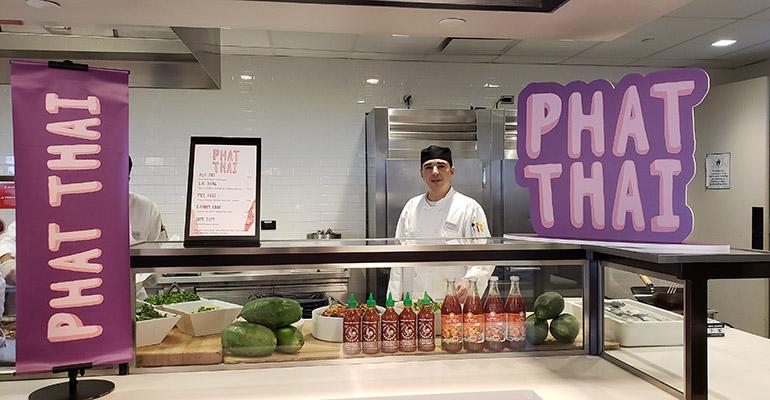 The Phat Thai action station brings seafood and pork dishes to the spotlight.

The germ of Phat Thai formed in Executive Chef Mike Melencio’s mind after a trip to Thailand, where his senses were assaulted by in the sights, sounds, tastes and smells of food prepared at the country’s ubiquitous markets. Melencio, along with Director of Culinary Innovations Tim Buma and Supervising Chef Bill Unterstein translated that immersive experience into Phat Thai, an innovative spin on those street foods. 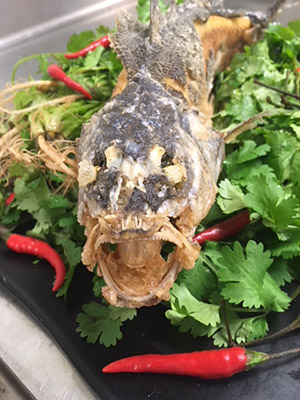 While the whole fried fish is meant as a conversation starter and a way to grab guests’ attention, it’s a $9.25 commitment. More often it’s served in 6-ounce portions. “Some units have promoted the whole fish as a shared plate,” says Serena Crutchfield, senior director of marketing for Restaurant Associates. “People were kind of ‘whoa,’ but it’s very good. And a lot of people were super excited because they had been to Thailand or they are foodies who appreciated it,” she adds.

“Diners have been looking for more experimental options, but Phat Thai wasn’t too far off the beaten path to scare people away,” Crutchfield says.

While Thai is a popular ethnic cuisine and the menu is meant to draw more adventurous eaters, it took a little coaxing to get guests on board at first. Posters, table tents, banners and digital promo material heralded Phat Thai, but when the stations started popping up last fall, “Some people said, ‘I don’t know what tod mun pla is; I don’t know if I’m going to like it,’” Crutchfield says. To win them over, associates did heavy sampling. Some workplaces opted to introduce  selected items from the Phat Thai menu gradually, at themed global stations that allow customers to pick and choose among different dishes and pay for them by weight, a la salad bars.

As it turns out, tod mun pla is one of the most-requested add-on, in part because the $4 price point invites trial. Also popular are gai yang (char-grilled lemon grass chicken with lettuce) and pork larb (minced pork salad). 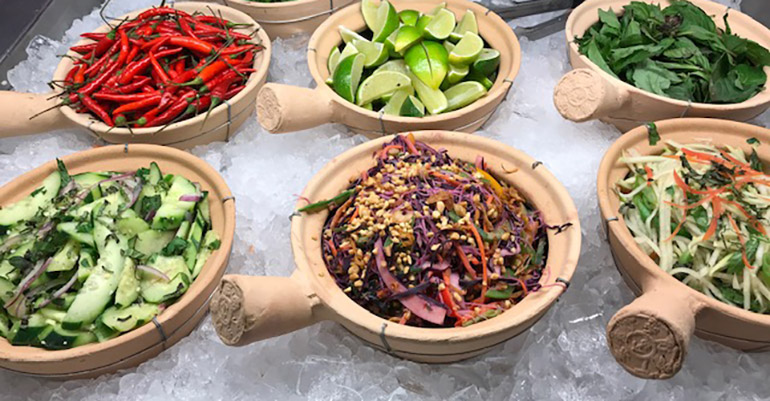 Launching the Phat Thai stations improved sales and check averages at the majority of Restaurant Associate location that introduced it, with sales increases ranging from 2% to a whopping 46%. “Our customers love it,” one corporate client observed when asked for feedback on Phat Thai. Introducing the menu in December provided an end-of-year lift for some locations that typically see fewer covers during that period. And despite the high ingredient cost of seafood for items like the pla tod and tod mun pla (fish cakes), lower-cost options like muu bing (grilled pork skewers) and the pork larb balance out for a moderate overall food cost. 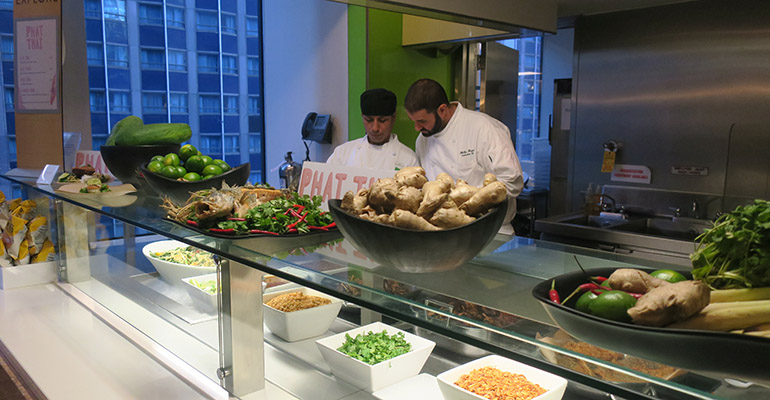 Phat Thai is one of a series of revolving action stations that Restaurant Associates introduces on a regular basis. Each year, the corporate culinary development team designs four new trend-forward core themed stations. Chefs at each corporate account have the freedom to develop their own action stations as well, and sometimes those local programs are so successful that they get picked up across the system.

Restaurant Associates’ action stations also revolve around special events, holidays, chefs’ demos and other themes. In addition to stirring up enthusiasm among the customer base, “we want to be known as innovators,” Crutchfield says.