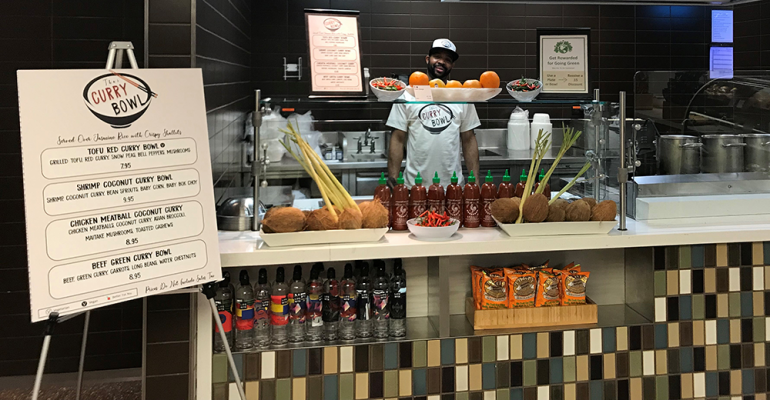 When Jenna Amoroso, senior marketing manager for the New York-based contract management company Restaurant Associates (RA), conducted an online poll to find out what her customers wanted to see more of at their employee café, the answer was clear: More than 20% were looking for new Asian-inspired meals.

That’s how Restaurant Associates Executive Chef Jack Payne came about launching their Thai Curry Bowl concept at one of RA’s major corporate clients. “We wanted to introduce something that wasn’t ramen,” Amoroso says. A menu of spicy, broth-based Thai-inspired rice bowls offered the bold ethnic flavors that customers craved—while surpassing typical Thai dishes they might already be familiar with, like pad Thai. Plus, “it’s perfect for ruthless Manhattan winters,” Amoroso points out.

The Thai Curry Bowl action station has a simple, made-to-order menu that’s entirely customizable. “One of the things we thought about was having vegan and vegetarian options,” Payne explained. Diners can choose from proteins including grilled tofu, shrimp, chicken meatballs or beef as well as vegetable add-ins like snow peas, bell peppers, mushrooms, baby corn, broccoli, snow peas, water chestnuts, carrots or bean sprouts, which are wok-sauteed to order. Then they pick a broth—mild coconut curry, medium red curry or spicy green curry. The protein, veggies and broth are ladled onto a bowl of steamed jasmine rice and topped with crispy shallots. “It takes two to three minutes. The woks are very powerful,” says Cody Abrams, an executive chef for the corporate account. 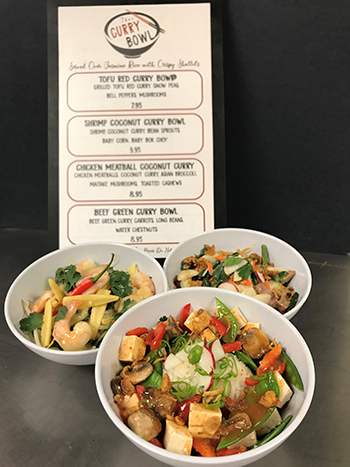 The mix-and-match concept means that Thai Curry Bowl can easily accommodate customers’ different dietary needs. The broth doesn’t contain any meat or dairy, and all of the bowls are entirely gluten-free. Plus, “this account does have a registered dietitian on site, so she’s able to work with the team,” Amoroso says. “If the guests have a question, she’s available to help guide them.” Having meatless options also aligns with the client’s emphasis on plant-based eating.

Less meat means that Thai Curry Bowl’s offerings are both affordable for customers and cost-effective for the client. With plenty of vegetables plus rice and broth, the portions feel ample overall. “Typically, there are three to four ounces of protein, and it’s still satisfying,” says Payne. Bowls retail between $7.95 and $9.95 depending on the protein choice. “It averages 32% food cost versus our average station at 45% and allows for easy upselling with extra protein and Thai iced tea options,” Amoroso says. The initial station setup was cost-effective too. Thai Curry Bowl was tailored to the station’s existing buildout, which included a wok, warmers and cold wells. “So it was just about tweaking,” Abrams says.

The biggest challenge, it turned out, was getting the strength and viscosity of the broth just right. “It’s really about controlling the spice levels. Some people like more and some people like less,” Abrams explains. He experimented with various curry bases from local Asian markets to find options that were flavorful without being overpowering. He also tested a number of coconut milks—the ingredient that acts as the broth’s main thickener. “The broth is water, coconut milk and curry base,” he says. “But some coconut milks are more watery than others.” Finding one with the right thickness proved key in creating a broth that felt satisfying and rich.

Working out the kinks didn’t take long though. And when Thai Curry Bowl launched at the end of 2018, it was an immediate hit, with covers increasing an average of 44%. The success encouraged Payne to run the station for one week each month throughout the winter of 2018-2019. “We kept this as a winter program. As the weather warmed up, we moved onto lighter fare, but it will be coming back again this winter,” he says.

So far, the client has featured Thai Curry Bowl at three of its New York City locations, with plans to branch out to other nearby locales this year. Restaurant Associates hopes to bring the program to other clients as well.  “We’re planning to put this in our guide that goes out in January to encompass winter programs so more units can roll this out,” Amoroso says.

Datassential report analyzes the road ahead for business dining
Jun 23, 2020