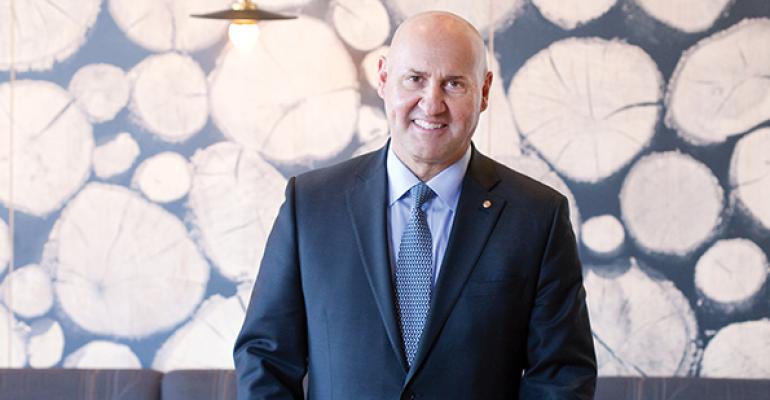 Edward Sirhal serves as president of Restaurant Associates (RA), one of the industry’s most lauded companies, and it’s hard to imagine that it would exist in anything like its current form without his efforts and leadership.

Consider, for instance, that when Sirhal joined RA in 1991 as vice president for business development, its restaurant services (contract) arm had 15 clients—mostly cultural centers like the Metropolitan Museum and the Kennedy Center—and was doing $50 million in annual sales.
Today, those numbers are around $650 million in sales and 160 clients, and the business has broadened to encompass much more corporate dining, exactly the focus Sirhal was brought in to provide.

Under his leadership RA has also moved to the forefront in areas like wellness and sustainability promotion, alliances with celebrity chefs, the development of innovative and trendy culinary concepts, and an emphasis on employee recognition and enrichment that fosters homegrown talent while boosting retention rates. And all this while also maintaining and strengthening RA’s traditional role as a provider of food and service par excellence to a premier client base.
That record of achievement was recently recognized with the 2015 Silver Plate Award in the B&I/Foodservice Management category.

Sirhal started his professional career while still a student at Boston College (BC) as a management trainee with concessionaire Ogden Corp.

“They were kind enough to give me a job before graduation that exposed me to all aspects of operation,” Sirhal recalls. “I was able to travel the country and work in all kinds of areas, from operations to marketing, sales and accounting.”

Sirhal says he had a special interest in sales and business development, so he was given the opportunity to work with sales teams in a support role, helping to write proposals, responding to RFPs and developing presentations.

“What intrigued me was the amount of time, effort and detail it required to land an account,” he recalls.

Sirhal stayed with Ogden for two years after graduation from BC, then took a position with Greyhound’s foodservice unit as eastern regional sales director. Two years later, he was recruited by Marriott Corp. to become director of sales for its contract business. “It seemed like my dream job,” Sirhal says. “They were the premier brand in foodservice.”

Sirhal spent three years with Marriott, then was persuaded to return to Greyhound, where he was instrumental in changing the unit name to Restaura.

Sirhal spent nine years with Restaura doing that. The signal that it might be time to move on came when he served as president of the Society for Foodservice Management (SFM, later SHFM) in 1989.

Why RA’s turnover rate is under 10 percent

“I was able to travel around the country and spend time with leaders in business dining, and it really opened my eyes to what was out there,” he says. Through SFM he met RA CEO Dick Cattani and Neil Reyer, head of corporate foodservices for RA client Chemical Bank.

“On a trip to New York I spent a day with Dick,” Sirhal recalls. “He showed me some of their restaurants, including Neil’s operation. I saw this as a game changer, to combine restaurant quality in an onsite client location. It was something that just wasn’t being done in industry at that time.”

When Sirhal joined RA, it was mostly a commercial restaurant operator with a “fledgling” contract division run by Cattani. Expanding its presence in corporate dining was the priority.

“At the time New York was on a growth path as financial services and media were expanding and the desire of clients to elevate foodservice to an amenity became a big deal,” Sirhal says. “For those clients, we wanted to make sure RA was the best choice.”

Manhattan was the natural focus and “even Jersey City was considered too far away,” Sirhal laughs. “About 95 percent of our clients were in New York City; now it’s 50 percent.”

Geographic expansion was gradual, but what didn’t change was the target market. “We decided early on to stick to our knitting and focus on premium corporations and cultural centers,” Sirhal says. “Not many companies can say that their strategy has continued to work over a 25-year span, but we can.”

Sirhal has continued the elevation of the company's programs since becoming president in 2008 with initiatives like alliances with famous culinarians.

A connection with Wolfgang Puck and Carl Schuster led to a partnership at venues like the Georgia Aquarium and later the new Newseum in Washington.

“We were first to have such a joint venture in museums and entertainment venues,” Sirhals says proudly.

Another idea was the Innovation Summit that annually brings together RA chefs and managers—and clients—to showcase upcoming culinary innovations.

But Sirhal says he is most proud of having fostered an organization that recognizes outstanding associates and helps them grow their careers.

RA’s turnover rate is under 10 percent, remarkable in the foodservice industry. Why?

“We treat associates with respect, pay them well, provide good benefits and go above and beyond to give them room to grow, with plenty of room to advance in both RA and our parent company [Compass Group].”