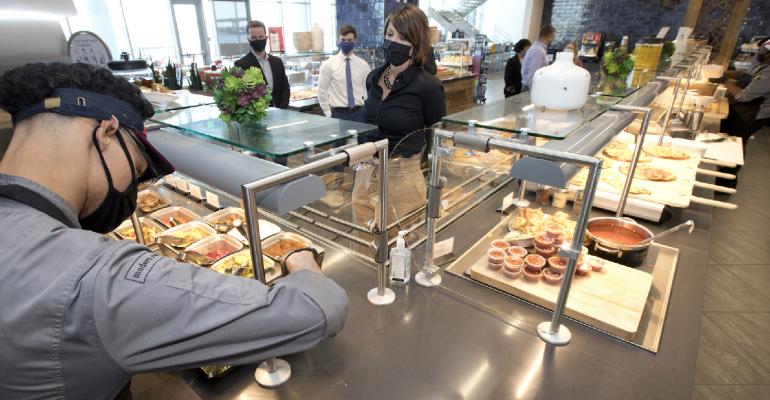 While the COVID-19 pandemic has certainly curtailed many dining operations, especially in corporate dining, it doesn’t mean that companies have abandoned this traditional amenity. In fact, some are opening new dining venues in new facilities. One of them is Brown & Brown, a leading insurance brokerage firm that recently debuted its newly built campus in Daytona Beach, complete with a brand-new cafe operation managed by Sodexo.

The Sanctuary Café at the new Brown & Brown campus opened Feb. 1 and offers guests a culinary experience with local flair using Sodexo’s Modern Recipe platform, which combines contemporary food choices with creative spaces in a pandemic-compliant environment. Developed specifically to accommodate COVID and post-COVID business dining environments, Modern Recipe, which Sodexo introduced last year as a retrofit in several corporate dining locations, had its first ground-up implementation in the new Brown & Brown café. The program is characterized by the use of fresh, often locally sourced ingredients from area businesses, cuisine concepts tailored to the preferences of the in-house population and a heavy emphasis on technology solutions that offer quick, touchless transactions, extended hours and customized, convenient service. 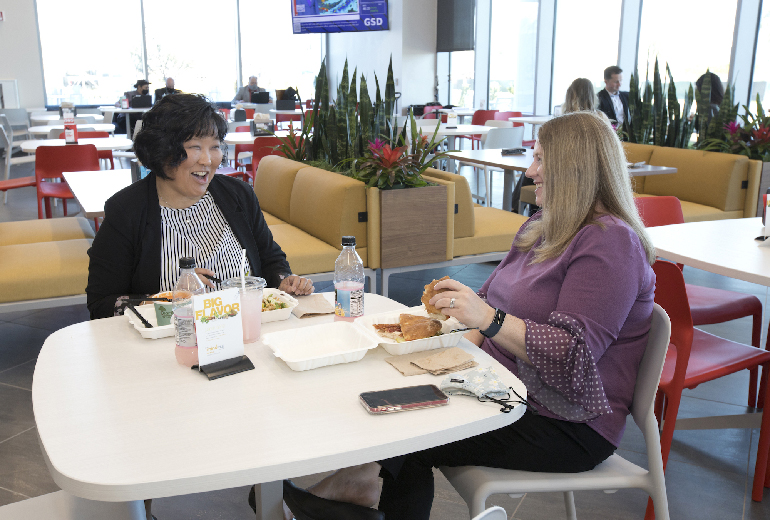 Currently, only about 150 employees are at the Brown & Brown Daytona Beach campus on any given day, giving the café operation a chance to ramp up slowly.

Currently, the campus only sees 130 and 160 people at a time rotating into the building on an average day and sharing spaces depending on who is in the office which day, says Sodexo General Manager Will Smith, who estimates that full building occupancy is probably closer to a thousand.

As for the café operation, “we’re running really four different made-to-order platforms” in Sanctuary Café, Smith explains. “We do very little traditional steam table service where we’re holding hot food and waiting to put meat and potatoes on a plate and kind of assembly line it. Instead, we’re bringing in high-quality fresh food and doing a lot of the preparation right there in the front where the customers can see it.”

The platforms include a Boar’s Head branded deli station, a pizza station featuring pies made with hand-stretch dough and baked in TurboChef ovens that turn them out in 90 seconds, and two action stations. One specializes in customized salads as a substitute for the currently closed salad bar and another that features a rotation of global cuisines with dishes such as pan-seared Asian tuna and Korean barbecue, with everything made with the freshest ingredients, Smith stresses. “On Fridays we bring in whole sides of fresh fish and cut them down in-house and cook them to order on a Fresh Catch platform,” he adds. 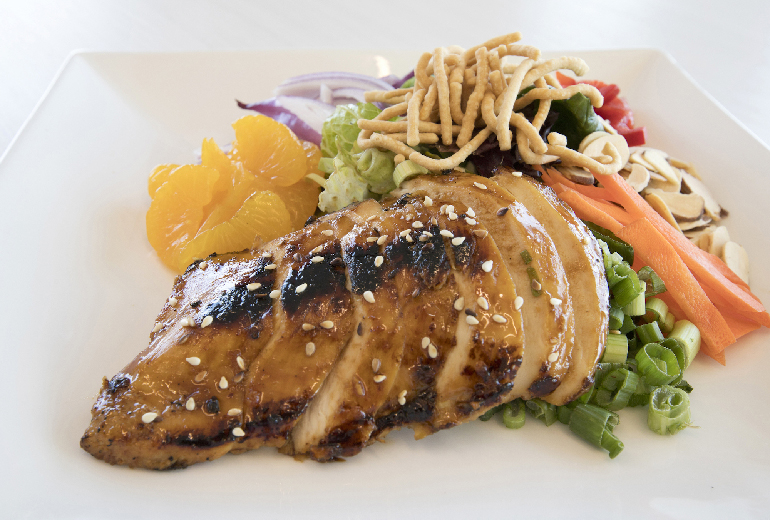 An Asian chicken salad, one of the offerings on the Sanctuary Café’s five-week cycle.

Fresh Catch Fridays have been a big hit. The station where it is offered serves custom salads the rest of the week, usually topped with a protein, “but then on Fridays we do mahi, red snapper, grouper, trout, Arctic char, salmon and they line up for that. It’s fresh, not frozen and cleaned and cut in house,” Smith says proudly.

Another popular attraction is the poke bowl run for one day on one of the action stations as part of the café’s five-week menu rotation. “We bring in a fresh sushi-grade tuna, but we also offer a cooked salmon for people who aren’t quite as adventurous,” Smith explains.

There is also a We Proudly Serve branded Starbucks station that does a brisk business in the mornings and in the last 10 minutes before it shuts down in the afternoon.

“Frankly, it doesn’t matter when we close the Starbucks because whenever we do there’s always a rush 10 minutes before it closes with people getting what they need to fuel them for the rest of the afternoon,” Smith quips.

“So even after we’ve shut down [manned] operations in the dining area, people can still come down at two in the morning and get a Red Bull and a bag of chips or whatever they need to finish what they’re working on,” Smith observes. 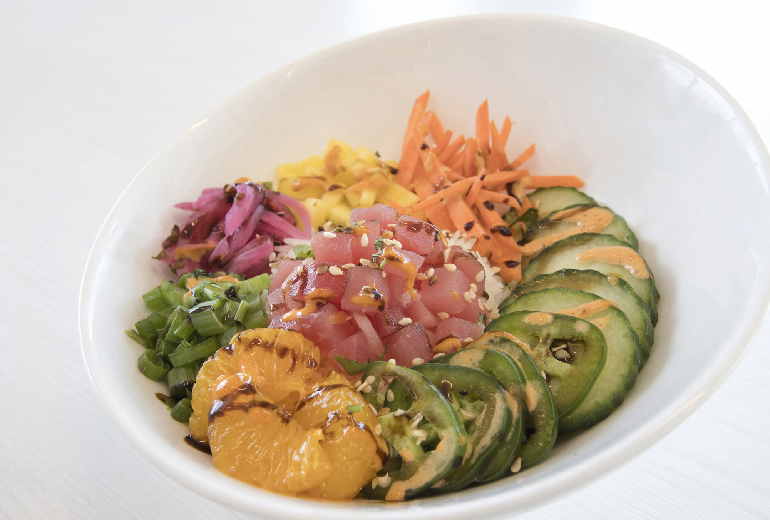 Poke bowls, made with either fresh tuna (pictured here) or cooked salmon, have been a huge hit the two times it has come up in the menu rotation.

Automation solutions associated with the Modern Recipe platform also includes Sodexo’s Byte app, which allows customers to view the menu, including nutritional information, as well as preorder and prepay for pickup. The mobile payment platform includes a rewards component that encourages usage even if the order is not made ahead of time. In any case, even payment in the café is cashless, an arrangement that both the client and Sodexo wanted as both a safety and convenience measure.

The preorder option, which launched on March 1, a month after the café’s opening, has seen only “minimal” usage so far, Smith says. “We purposefully delayed it just so we could get our feet wet first with the cafe,” Smith explains. “Also, with the [building] population being so low there isn’t as much of a demand for that service yet, but as the population increases, we expect it to pick up.” 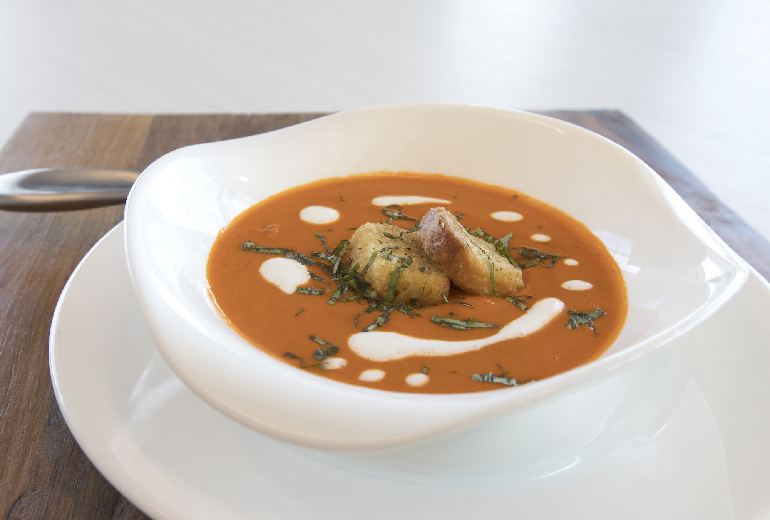 Another Sanctuary Café menu offering is this creamy tomato bisque.

On the other hand, the app’s payment module has seen brisk usage with customers taking advantage of the rewards program “and really just the convenience of paying that way as it only takes about a second for them to scan their QR Code to pay rather than pulling out a credit card, putting in a PIN, then waiting at the register,” Smith notes. “So they’ve really been receptive to the program itself and I think we’re going to continue to add to it, possibly even expanding to delivery. We’re in an 11-story building, so our footprint is really just up and down and there are pantries on every floor that we’d be able to deliver meals to. Basically, we’re excited to see what value and service we can bring to them as the business increases.”

One addition being contemplated once the building population increases is a take-home meal service, which could be as simple as boxing up some prepared and re-heatable portions of items from the lunch menu for customers to take as they’re leaving for the day. Smith says some customers have already been buying two lunch entrees with the intent of taking one home, so there seems to be a market for this addition.

Another planned extension is to use a big outdoor seating area located next to Sanctuary Café and/or a patio area on the building’s second floor to host “experience-style events” such as barbecues or Friday afternoon happy hours.

“Brown & Brown has a very family-oriented company culture,” Smith notes, “and people have missed that being isolated during COVID, so it might be something we can do to help rebuild that connection with some of these special events.”

“The Sodexo team has been a true partner from day one,” said Andy Watts, executive vice president, CFO and treasurer for Brown & Brown. “They were constantly seeking to learn about our culture and how they can best support us—we now consider them part of our team. Their food and service are outstanding, and we could not ask for a better partner for our new Daytona Beach campus.”