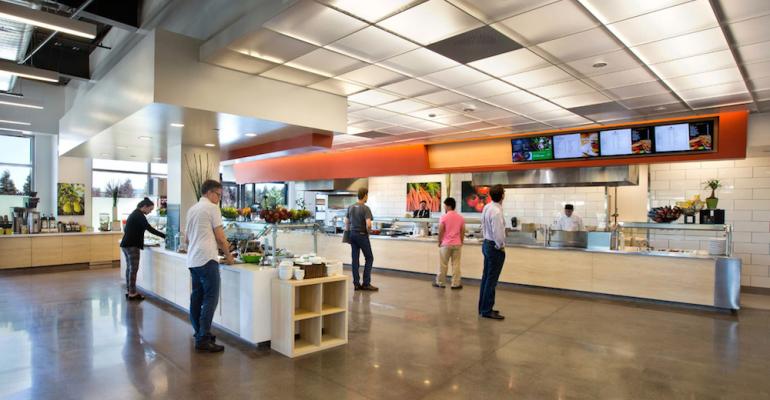 Arcade Café emphasizes scratch-cooked choices and local ingredients as much as possible.

Anthony Kresge is a familiar face in the Bay Area culinary scene, most recently as executive chef of Shadowbrook Restaurant, a locally prominent eatery in Capitola, Calif., on Monterey Bay in Santa Cruz County.

At Shadowbrook, Kresge overhauled the traditional menu with a series of newly created dishes influenced by his training in Italy (he has Master’s certification in advance pastry and arts from the Italian Culinary Institute in Calabria).

That same approach has now been brought to a corporate dining location in Santa Clara, where Kresge oversees the Arcade Café inside the fast-expanding Menlo Equities office campus. Arcade is the only onsite dining venue for the complex, which currently is made up of  three multitenant buildings with a combined population of around 1,350.

Arcade Cafe is operated by Epicurean Group, a fast-growing foodservice management company that operates onsite dining at colleges and private schools as well as corporate sites. In 2015, it ranked No. 36 on FM’s Top 50 Contract Management Companies listing with 2014 revenues of $46 million.

Arcade Cafe is currently serving about 250 covers a day for lunch and 350 total each day, including evening catered events. That is expected to grow as the site population expands, says Epicurean CEO Mary Clark Bartlett.

“People have been moving in [to the building complex] later than they should, but in the meantime we are seeing people coming over from other nearby companies because they love the food,” she says.

Bartlett estimates the site population at the complex could potentially reach 5,000 to 6,000 once everyone is moved in. Meanwhile, the lunch hour is already seeing a crush.

Possible solutions to ease that crush range from offering discounts to entice some diners to come earlier or later than the peak period, to a possible expansion of the café’s current 8,200-square foot footprint or adding satellite sites as the complex grows.

One thing not in dispute is the draw of Kresge’s food, which ranges from everyday staples like a full salad bar, burgers and grab-and-go sandwiches to daily specials, including vegetarian options, based on what ingredients are available locally, something the café emphasizes as much as possible.

For customers, it’s quite a deal for such quality, with a variety of price points from which to choose.

Diners order at the counter, and there is indoor and patio seating available. There is also an adjacent 730-square-foot media room for meetings the café caters.