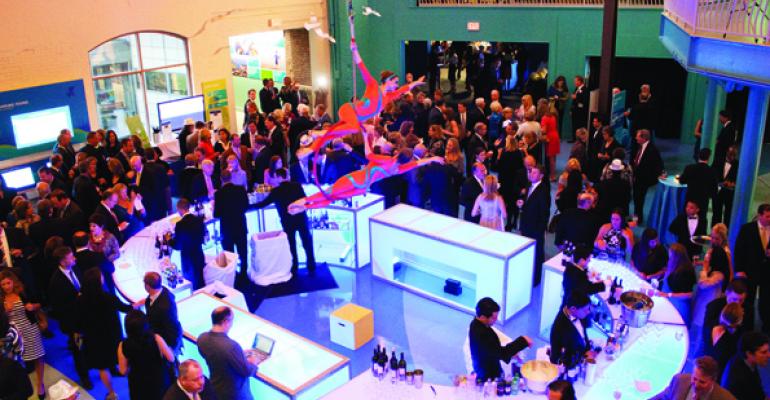 Museums Get Creative With Catering

When it comes to creating unique catered events, operators at museums seem to have it easy. With a built-in bevy of interesting and colorful themes—from world-famous painters and their art to amazing scientific exhibits—it would seem that operators in cultural centers could simply pick their ideas from their own walls or exhibits. But in reality it’s never quite that easy, as FM learned from museum foodservice operators across the country.

Selling The Concept. For one thing, between a museum’s governing board and its often highly attuned visitors, expectations always run high. “We are really salespeople and can only produce intriguing events if we can sell our vision to the client,” says Sarah Finlayson, senior marketing manager, special events, Sodexo Leisure and Shomi Events. “We need to instill confidence in the client that we can rise to the level of the artist or exhibition,” she adds. 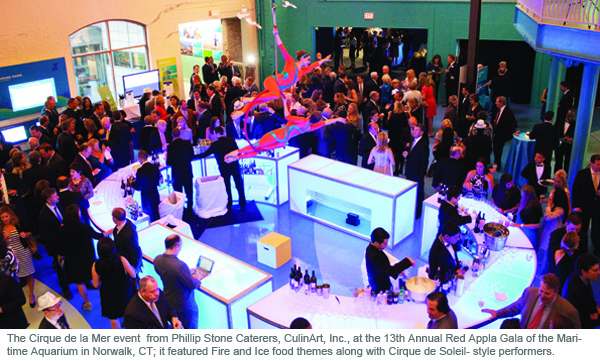 “Within our own company we confer and collaborate with many teams,” adds Chazz Alberti, Sodexo’s national director of culinary. These range from chefs and event personnel to hands-on management teams at a museum.” She and others note that museum board members also often weigh in with their own perspectives.

Every cultural institution has a board of directors, often made up of key private donors, whose purpose it is to not only keep the organization’s mission top of mind but to also attract financial contributions, vital to any arts organization.

“We need to help them (the board) visualize the possibilities of an event, beyond the obvious, throughout all the planning stages. In many cases there are months and months of preparations and many meetings with the client to ensure that our vision, and that of all the stakeholders, match,” he says.

Asked for an example,  Finlayson and Alberti refer to The Fashion World of Jean Paul Gaultier: From the Sidewalk to the Catwalk. That exhibit was featured from November, 2011 to February, 2012 at the Dallas Museum of Art. Gaultier’s early work in the 1970s earned him the reputation of being the “enfant terrible” of fashion, and the exhibition highlighted his eclectic and vibrant sources of inspiration. His work drew from dance, pop-rock, cinema, television, photography, and world cultures, and was displayed via a selection of over 140 haute couture dresses and ready-to-wear pieces made between the early 1970s and 2011. Dallas was the first of only two U.S. cities on its international tour. 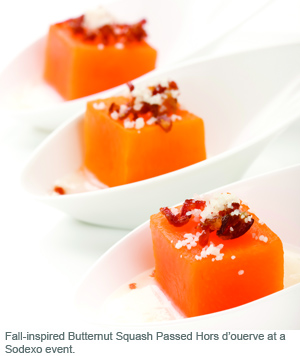 “This was event planning to an extraordinary level while remaining sensitive and considerate of the organization’s somewhat conservative mission,” says Finlayson.

“We were asked to kick off the event with a bang, with the food providing an experience that would help sell event tickets,” adds Alberti. “The museum wanted us to create an elegant lunch combining the unique elements of both Gaultier and Texas. Not a mix that readily comes to mind!”

“We worked closely with the chef to understand from where he was drawing inspiration,” says Finlayson. “Then we had to create a menu proposal that really captured his culinary vision and its connection to the theme. For the client, we put visuals to the words on the menu to help communicate the story that the exhibit is telling,” she explains.

“We create a narrative of what the exhibit means in the art world and at the table,” adds Alberti.

One menu example of Alberti’s vision was to take an iconic Gaultier fashion creation, Madonna’s infamous Cone bra, and create an entrée based upon its “in your face” contours.

“We often get challenged by clients to be both cutting edge and daring. However, we don’t really know what that means in the context of the client’s perspective until the eventual menu tasting,” says Alberti.

“We presented the board with a seared duck breast with the super crisp, bacon-like skin almost lifting off the tender flesh. They loved it!” he says.

“Then, in terms of foodservice, we have to ask ourselves, do we dare serve duck to 250 guests?” says Alberti. “So we took a walkthrough of the whole prep and serving process, to ensure that our planning and process would reliably produce food that meets the mission.”

The Madonna costume entrée, a boudoir dessert theme, graphic menu images (see photo, above), and stark décor with flashes of neon all captured what Gaultier and the exhibit was about.
“As far as finding our inspiration,” says Finlayson, “we were very lucky to have such a rich subject matter.”

A Look Into The Past

Seattle and Copenhagen were the only two cities to share in the exhibit of Gauguin and Polynesia: an Elusive Paradise, highlighting the complex relationship between Paul Gauguin’s work and the art and culture of Polynesia. The exhibition, on view in February 2012, included about 50 of Gauguin’s brilliantly hued paintings, sculptures and works on paper.

For the grand opening celebration, Chef Hetherington and his team looked to Gauguin’s personal life and career to create French and Polynesian inspired menus that were blended with the traditions of Northwest fare. 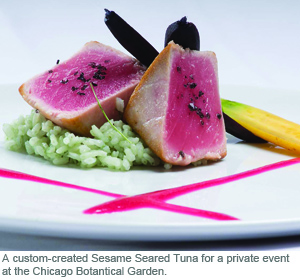 “Prior to any new exhibition event I take the tours given by the curators before the exhibit opens to the public. I look for an inside sense of the artist and what he or she was thinking or doing at the time they created their art,” he says.

“For Gauguin, I also did some of my own personal research into where he lived (South America, France, Polynesia) and based some of the menu on that. The clients at SAM like coming in and having a restaurant that offers them menu choices beyond the normal yawn of a museum café,” he adds.

“Ultimately, one of our most popular menu items served throughout the event was house-made Spam with a Fried Egg, Sticky Rice, Spicy Bacon Fat, Mache and Dijon and our Albacore Poke with Fried Taro Root.” (Poke, pronounced poh-kay, is a recipe based on fresh raw seafood variations and flavorful mixture of spices served as appetizer or main dish).

“Both of those are very popular in the Polynesian islands and we put our regional and seasonal spin on them,” he says. “To show the influence of his art, we made our plates as colorful as possible to reflect the colors he used.”

“Incorporating unique ingredients like taro root, dashi, and green papaya was welcomed by our guests,” Hetherington adds. “Many had never tasted those ingredients before unless they were regulars at some of the great Vietnamese restaurants we have in our region.”

A Look Toward The Future

Here’s an idea to turn a yearly event on its head—use extremes! Darren Zaldo, general manager, for CulinArt Inc., and Phillip Stone Caterers did precisly that for the 13th annual presentation of the Red Apple Gala fundraising dinner benefitting the Maritime Aquarium at Norwalk, CT, this past April.

A little background: the Maritime Aquarium gives visitors a window into Long Island Sound, officially designated an Estuary of National Significance. The extraordinary ecosystem there has supported the economy and culture of this region since prehistoric times. The Maritime Aquarium’s Red Apple Fund for Student Enrichment—supported by individuals, corporations, and philanthropic organizations—supplements the cost of aquarium education for more than 10,000 students annually who may not otherwise be able to participate. 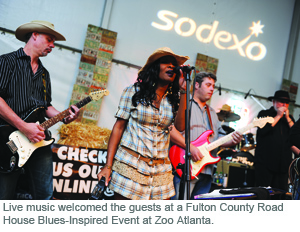 “This annual fundraiser always revolves around the apple and it must always be a component of the menu,” says Zlado. This year, the culinary team not only thought outside the box, but also outside the museum, as in dining under a big top tent where Cirque de la Mer (Circus of the Sea) was born.  Dining was staged for both inside and outside the museum with the added elements of fire and ice complementing and supporting the menu themes.

Cocktail hour inside the aquarium focused on all things fire, from the red hot colors (red, orange, yellow) in lighting and decor to action stations of fire-cooked foods.

Guests were ushered outside for the main event—an “iced” dinner. Cool colors and lighting, icy floral themes, shimmery decor and blue-hued lighting set the stage. Menu items reflected the ice theme and the signature apple icon made its impressive appearance in the first course, a Gazapcho Apple Salad. The culinary team took flavorful tomato gazpacho and gelatinized it into the form of an apple, then presented it on a bed of arugula, lolla rosa, and red oak lettuces, drizzled with a citrus vinaigrette and topped with candied pecans.

“The whole (gazapcho apple) development process took a full year to perfect,” says Zaldo. “We pulled chefs from all over the tri- state area, our nutritionist, and corporate chef of culinary development to help with the engineering of the ingredients to get it just right,” he says.

“The results were incredible. It didn’t fall apart on the plate but it had an ethereal, melt-in-your mouth texture once it hit the tongue. It was the perfect execution of both our idea and the Red Apple mission of the museum.”