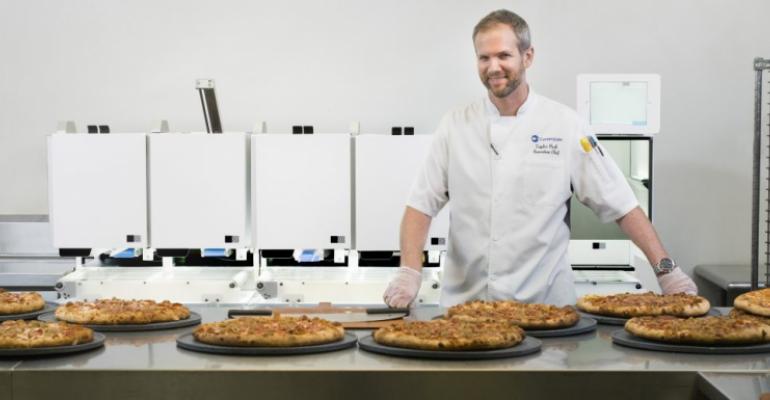 Unit that can turn out up to 300 pies an hour was beta tested in the T-Mobile Park suites in Seattle last month.

The pizzas were rolling off the assembly line last month in the suites at T-Mobile Park, home of Major League Baseball’s Seattle Mariners. The pies were not being made by hand—no chefs tossing dough in the air or anything like that. Instead, production was all done automatically, by machine.

The machine was courtesy of locally based food production technology vendor Picnic and was at T-Mobile Park thanks to a partnership Picnic formed with the ballpark’s concessions and catering services provider, Centerplate.

“We saw it last February in their lab and thought it was pretty cool,” says Steve Dominguez, Centerplate’s area vice president in Seattle. “It had an automated arm that laid the pizza on the assembly line, added the sauce, the cheese, the toppings all by order from an iPad. From about three minutes after they opened the app on the iPad, we were having pizza, and we felt it had application for our ballparks and other lines of business.”

What most impressed Dominguez was the unit’s potential turn out a large volume of pizzas in a consistent manner in a short amount of time. In turn, working in a Centerplate operated venue like T-Mobile Park gave Picnic a real-world environment in which to test its machine.

As a first step, the test wasn’t conducted in the hectic, high-volume environment of general concessions but in the more staid confines of the ballpark suites in the late stages of the season, when the Mariners had already fallen out of the pennant chase and were playing out the string on 2019.

“We chose the suite level because it was a different environment than the [Picnic] lab, but at the same time we still had an element of control—we knew how many pizzas we were producing because we get orders in 72 hours in advance,” Dominguez explains, though that doesn’t mean there weren’t still pressures to ensure quality and prompt service, he adds. In all, the machine turned out about 300 pizzas for the dozen games for which it was active, a modest total but valuable in gauging the unit’s potential for greater volume challenges.

“You have to walk a little bit before you get out there on the main concourse,” Dominguez quips. “This was fairly isolated—we have 70 suites versus, on a slow day, 10,000 people [in general seating] and 45,000 on something like opening day.”

The real-world test will help Picnic refine its machine, which Centerplate hopes to deploy in some of its sites at some point—not just sports venues like T-Mobile Park but convention centers and others with high-volume production needs.

For one thing, the unit could become a kind of attraction in and of itself. The test model in Seattle was located away from fans in the back of the house but Dominguez says he hopes Picnic can develop one that can be deployed along the main concourse in view of potential customers.