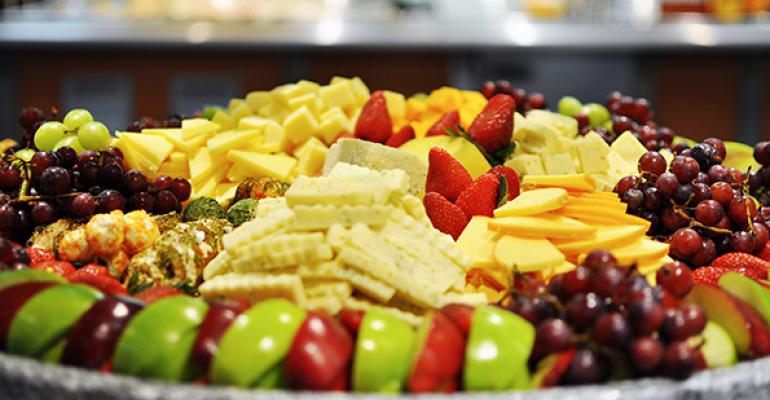 Stretchy mozzarella, smoky Gouda, nutty Jarlsberg, funky Gorgonzola and more were in the spotlight recently at the weeklong Fromage Fest at the University of Texas at Austin. It was a serious treat for students, who got a taste of a variety of cheeses and also some deliciously cheesy new menu items, says Steven Burke, chef manager.

“It was about the power of cheese,” Burke says, calling Fromage Fest “basically a whole week of cheese at each location with educational and historical pieces throughout.”

And of course, with cheese, there really is no better way to learn than by digging right in, tasting and enjoying. The event took place at different venues at staggered times throughout the week. More than 650 students showed up for one dinner event at Kinsolving Dining Hall.

Students watched mozzarella being made (by chefs who aren’t afraid of plunging their hands into scalding water), and then saw that same mozzarella become part of a cheese lover’s dream: classic Margherita pizza.

“Making the mozzarella in particular really opened students’ minds,” Burke says, adding that the process itself doesn’t take long, and students were surprised at how quickly it happens. First, milk is warmed with citric acid; rennet is added to separate the milk into curds; it’s heated again, kneaded and stretched and voila: fresh mozzarella.

To add the personal touch, a few local cheesemakers were on the scene, satisfying any curiosity cheese-loving students had regarding where cheese comes from.

Several varieties of cheese were displayed in showy fashion for tasting, with fun signage explaining the flavors and textures. The fest culminated with “The Great Grilled Cheese-Off,” a grilled cheese extravaganza, where several types of fancied-up grilled cheese were served with—what else—tomato soup.
UT Austin’s Housing & Foodservice team got the campus buzzing for the event with a combination of traditional signage (trifolds on tables) with eye-catching graphics, a clever social media campaign and good-old-fashioned word of mouth (sometimes on Twitter).

“We have a small-campus feel here, so word travels quickly when we plan exciting events for our students,” Burke says.