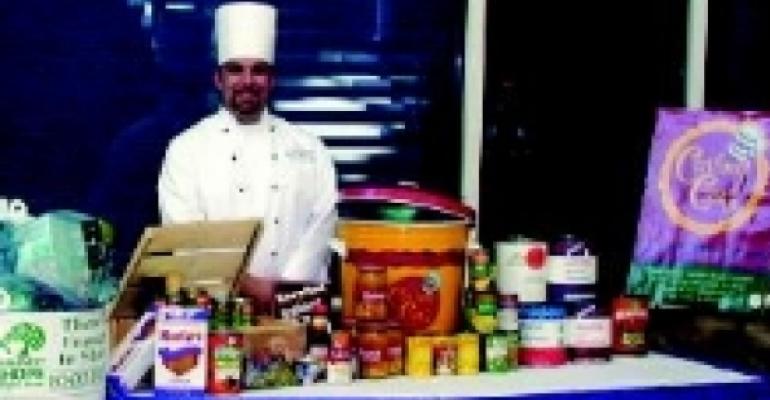 A Hero of Everyday Life

For somebody who only made the decision to embark on a culinary career halfway through college, Charlie Mattocks has certainly compiled quite a resume. He has cooked for top Air Force brass. And helped cater the CIA's 25th anniversay dinner ("Central Intelligence Agency," not " Culinary Institute of America"). He has also catered functions for Reagan-era Treasury Secretary Donald Regan.

Later, at the Smithsonian Museum of Natural History, he fed busloads of visitors. As general foodservice manager of the Patriot Center arena on the campus of George Mason University, he provided concessions to fans flocking to see acts like Randy Travis, the Moscow Circus, Sesame Street and home games for George Mason's high-profile NCAA men's basketball program.

Today, Mattocks has a somewhat less exotic assignment. As executive chef for Sodexho's operations at Carolinas Hospital System in Florence, SC, he oversees retail and patient dining operations. These include a 240-patient main hospital, a 100-patient rehab facility and an adjacent Women's Center, which handles up to 24 expectant mothers at a time. Annual managed volume is around $4.4 million.

He also finds time to do charitable work with the Harvest Hope Food Bank in Florence. His efforts recently won him Sodexho's "Hero of Everyday Life" award, an internal honor that recognizes an employee for service to the community. The award came with a $5,000 check that he was able to present to Harvest Hope.

What made you decide on a culinary career? When I was in the Boy Scouts, one of the merit badges I was working to earn was for cooking. Working for that badge first sparked the interest in me—just being able to prepare a meal and understanding how it worked and making people foods that they liked. I was about 12 or 13 at the time.

I didn't decide about culinary school at that point. Instead, I went to Stephen F. Austin University intending to be an accountant. It wasn't until the end of my second year that I realized that accounting wasn't what I wanted to do, that I really enjoyed working with food. So I left Stephen Austin and enrolled in Northern Virginia Community College in Annandale and took their foodservice management course, which is now the culinary arts program there. Soon after that I got a chance to interview with Marriott and went to work in their Managed Services division. I've been with them now for more than 22 years [Sodexho merged with Marriott Management Services in 1998-ed.].

How did you get involved with hunger issues? I had helped start the local ACF chapter here, and then as I was networking with peers around the state, they told me about this neat program for Childhood Hunger Day in which we go out and teach disadvantaged kids about proper nutrition. So each year for the past five years, I've gone into the elementary schools in the area and taught the kids basic nutrition, personal hygiene and sanitation, kitchen safety.

I also introduce them to the food guide pyramid and the importance of breakfast, exercise, why you need a nutritious lunch and so forth. With older kids we actually take them to the grocery store and go through food labels to help them understand what things on the label mean in terms of assembling a balanced meal.

Is that also when you started with Harvest Hope? Harvest Hope came along in the later part of 2000. When I was going through the list of food banks listed in Sodexho's Share Our Strength program, I noticed Harvest Hope was right here in town. So I gave them a call and we hooked up. I started doing some local small events at first, just trying to increase awareness of the food bank because even now people don't realize it's here. Then as you start learning the statistics— that one in four kids here in South Carolina goes hungry each day, for example—you really feel like you have to do more.

Was there a moment when it hit you that you really were making a difference? About a year ago, I was having lunch with my son at his school. One of the little kids came up to me and said, 'You don't remember me but I was in your Cooking For Kids class and I wanted you to know that I really appreciated the things that you were teaching me...'

How old was he? Only nine, and he had taken the class three years earlier, when he was only six, but he remembered me. Until then I really did not realize what an impact that time spent with those kids made in their lives. That has just really spurred me further to really become an advocate for children and nutrition and hunger awareness.