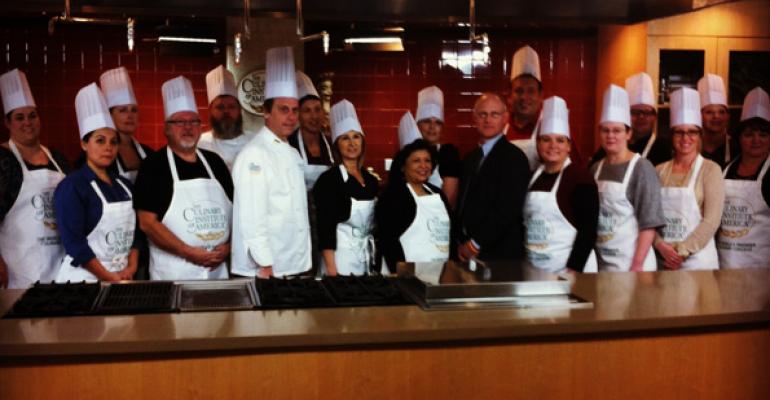 &#39;Getting Back to Your Roots&#39; Symposium combines classroom learning on kids&#39; tastes and culinary training.

Sixteen leaders in K-12 school foodservice, representing nine districts from across the country, met last week at The Culinary Institute of America’s (CIA) San Antonio campus for the annual “Getting Back to Your Roots Symposium.” The accredited program, developed by Chef Mark Ainsworth, PCIII, CEC and Professor of Culinary at the CIA, consisted of three days of discussion and discovery in the complex work of feeding children.

“We know that school foodservice leaders continue to manage significant evolutions in their food and nutrition programs,” said Ainsworth, adding that at the core of the program is “the opportunity to learn from each other, be inspired by each other, and return home with an enriched passion for food."

Adam Brumberg, deputy director of The Cornell University Food & Brand Lab, contributed a perspective on kids' food psychology and science to the program, which is sponsored by Schwan’s Food Service, Inc.

The intensive curriculum for the three-day program reflected Ainsworth’s expertise of global flavors and new practices of healthy cooking with whole grains, proteins and vegetables, as well as his understanding of how children taste food differently than adults. His knowledge of K-12 school food is based on more than 12 years of working with schools.

"Your competitors are doing a really great job with branding, and have the money to spend on it," Ainsworth said. "But you can brand yourself, too, and you have great opportunities to do so." Cool stickers and labels can go a long way in getting kids to crave any new item, several attendees reported doing just that. Ainsworth encouraged the group to not overlook mailed-home menus as a way to extend the branding process to parents with great descriptions of the offerings.

Presentation also makes a big difference in how food is perceived by kids, especially on the line. Some directors reported success with simply placing ingredients--like cans of tomatoes or whole onions--out on the line, and using large skillets rather than institutional-looking hotel pans for service.

Ainsworth addressed the question of how to add flavor to pre-cooked commodity protein: using sauces (like the bright, intense chimicurri) and doing as much as possible to layer flavors into any given menu item. He recommended using Panko breadcrumbs to add crunch to baked chicken fingers, but with one method that's different: Toasting the breadcrumbs beforehand in the oven until they are very crispy and crunchy.

During a cooking demo, he talked about having a 'flavor system' in place in the kitchen: a set of ingredients that can be used for lots of menu items. A base of onions, garlic and carrots can go in so many directions. By adding lemon juice and fish sauce, you can make a Thai menu item. With olives and lemon, you can go Greek. Add all that to something like beans and you have a flavorful protein alternative. Ainsworth demonstrated cold salads made with a blend of quinoa and brown rice, a way to work with whole grains that's more interesting and with a better texture. He also demonstrated basic knife skills, in a 'train-the-trainer' style session.

Brumberg partnered with Ainsworth, presenting research and sharing applicable tools in the area of behavioral economics with attendees.

He referenced numerous studies on kids' lunchroom psychology that have been conducted by the Cornell Food & Brand Lab.

"Menu names make a huge difference in kids' perception," Brumberg said, citing an experiment where renaming a bean burrito 'The Big Bad Bean Burrito' led to an increase of 40 percent in sales, which would have been higher, had the burrito not sold out for the first time ever.

"When you name carrots 'X-Ray Vision Carrots,' that can double the consumption of carrots," said, Brumberg, who offered the idea of letting kids in an art class make posters for new menu items, and even create menu names themselves, anything that will up the cafeteria's cool factor. He cited more research from the Smarter Lunchrooms Movement, a USDA-funded child nutrition program at Cornell.

Actionable ideas for helping kids make healthy choices included tricks as simple and inexpensive as putting fresh fruit near the front of the serving line or placing chocolate milk just out of reach in a cooler. The power of branding and merchandising was also a focus. Brumberg noted that "moving the fruit" to a more visible place  as a tactic to get more students to make healthier choices "never doesn't work." He also mentioned getting a relatively inexpensive tool like an apple slicer to draw more attention to fresh fruits.

Inside the CIA's Kitchen

Attendees spent six or more hours cooking in the CIA’s kitchen, preparing recipe-based items and then developed new concept ideas as part of their final project, something that for many directors, took them far out of their day-to-day routine in a director's role.

“We expect that for several of our guests, it’s unusual to have the opportunity to ideate new concepts, support them with branding and merchandising concepts and then go into the kitchen to prepare them from a flavor and culinary perspective,” said Ainsworth.

Amidst the daily group classroom lectures and culinary demonstrations, attendees were placed in teams of four. Each culinary team began its creative ideation on day one, building toward a final day that includes a formal presentation on their branded concepts followed by kitchen time to produce and plate their menu items, concluding with critiques from Ainsworth and Brumberg.

Teams created not just menu items, but imagined how those items could be named, marketed and turned into a craveable choice for kids. The new menu items created and executed included: Poquitos: Little roll-up bites of matchstick veggies with bean dip, but into small bites with different dips; Carnival Pinwheels: wraps with two salsas; Rock 'em Sock 'em Noodle Bowls: with soba noodles and veggies; and the Naan Pocket, a portable, grab-and-go item with Tandoori chicken inside.

“These foodservice leaders are incredibly dedicated professionals that really want to feed kids great food to help them succeed,” said Mary O’Broin, vice president of marketing for Schwan’s Food Service. “With this program, they have the opportunity to focus on how kids taste foods and the techniques of cooking grains, layering flavors and producing new, realistic concepts.”